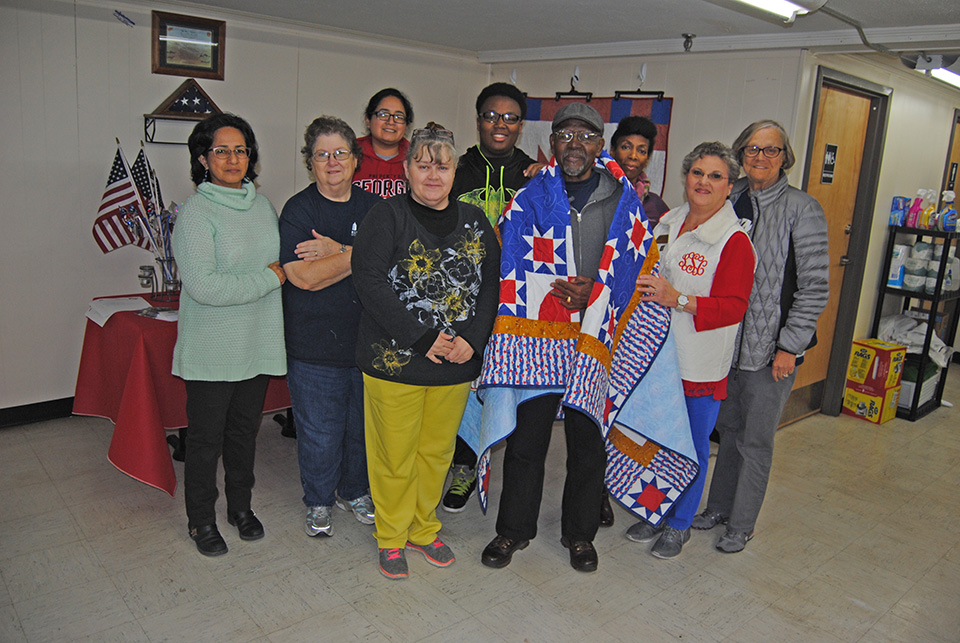 Quilt of Valor recipient Bill Fannings is shown with members of his family and the the local quilters who made his new quilt. In front, from left, are Rachel Ramirez, Cecilia Lashley, Lisa Parham. Mr. Fannings, Sheila Simpson and Hetty Mapp. In back, l-r, are Jessica Ramirez, Jahwill Fannings (son) and Theresa Fannings (wife). (Photo by Wayne Clark)

WEST POINT  — On Saturday, the Georgia-Alabama Stateline chapter of Quilts of Valor had their fourth quilt presentation to a local veteran. The 11 a.m. ceremony took place at Sewingmachine.com in downtown West Point with former Marine Bill Fannings being the recipient.

He joined the Marines just out of high school, went through basic training at Camp Pendleton, Calif., and was assigned to the Hawaii Fleet Marine Force. “We provided Naval gunfire and air support capabilities where needed throughout the Pacific region,” he said. “We traveled a lot to places like The Philippines, Korea and Vietnam. Toward the end of my career in the military, we were bringing in the divisions for the U.S. involvement in Vietnam.”

Fannings has deep ties to West Point. His parents and an older brother, the late Jim Earnest Fannings, were born in West Point. They were living in Detroit when he was born.

Jim Earnest came back to West Point, was a member of the city council and was attempting to develop some land he owned near I-85 when he asked Bill to move to West Point after his military service. He eventually did.

“I fell in love with it when I got here,” he said. “My family and I have lived in the New Harmony community near West Point for more than 25 years now. It’s been an honor for me and my wife, Theresa, to have raised three sons here.”

With family members, friends and Quilt of Valor quilters present for the Saturday ceremony, Mr. Fannings walked into the room with The Marine Corps Hymn playing in the background. Some of them waved tiny U.S. and Marine Corps flags. At the end of the recorded music everyone shouted, “HOOAH!”

Blue Star mom Catherine Roberts started the Quilts of Valor Foundation in 2003. He son, Nathaniel, was deployed in Iraq at the time, and she wanted him to return home in a better way than some of the young men who returned home from the Vietnam War,

She and some friends hit upon the idea of linking quilt top makes with machine quilters in a broad effort to award quilts to returning service members. They called them Quilts of Valor and they were meant to convey appreciation and gratitude to those who had served our country.

Over time, Quilts of Valor has grown from touching those returning from a war zone to including all veterans. Quilt of Valor are tokens of appreciation that unequivocally say, “Thank you for your service, sacrifice and valor.”

Close to 180,000 of them have been awarded thus far. “We want the word to get out there that local quilters are doing this,” said Sheila Simpson. “We will be here at sewingmachine.com on Saturday, Feb. 3 from 8 a.m. to 3 p.m. fro some quilting. Anyone who wants to help us, or to learn to sew, is welcome. We need more sewers, and we can teach you. Girls from age nine and up are ideal.”