Getting things back to normal at Givorns 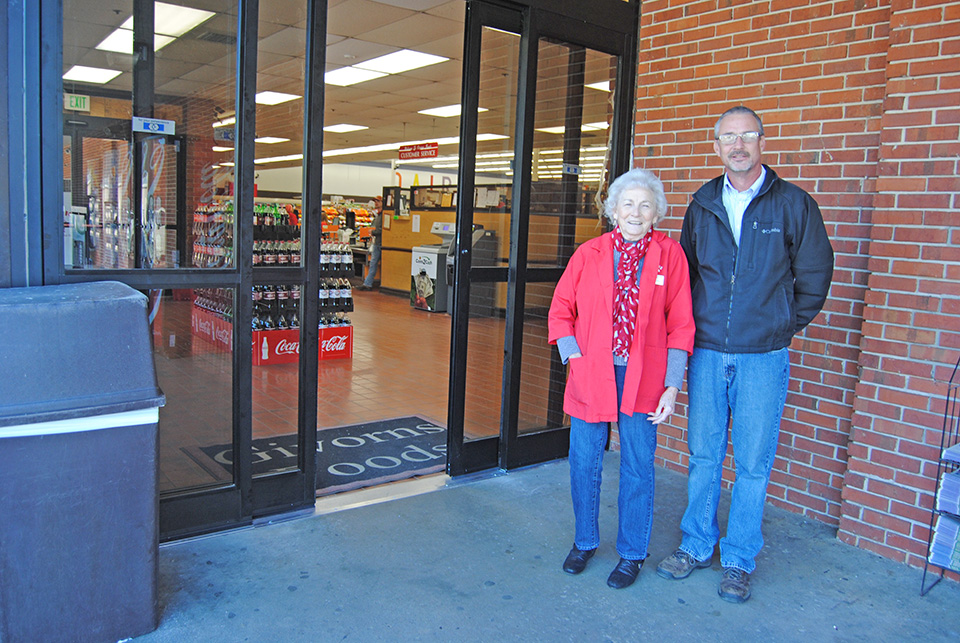 NEW DOORS AT GIVORNS — New automatic-entry doors have been installed at Givorns in Valley. These permanent doors have replaced some temporary plywood doors that were in place following a daring break-in at the store in November. Store Owner Shelvie Givorns, left, and General Manager Danny Crosby, right, want to thank their customers for remaining loyal to Givorns through some difficult circumstances. (Photo by Wayne Clark)

VALLEY — Things are getting back to normal at Givorns following a daring crash and grab theft that took place at the store in the early morning hours of Nov. 21.

Some new permanent doors were put in this past week, replacing some temporary plywood doors that were put up after the break in. This is something very much to the benefit of both the employees and Givorns’ many loyal customers.

“This is very much appreciated,” an employee told The Valley Times-News. “It could get pretty cold in here with the temporary doors. It’s nice and warm now.”

“The new doors were on special order,” said General Manager Danny Crosby. “It still takes about five weeks to get them in and to have them installed. We had the new doors put in on Dec. 28 and 29.”

There are two entrance ways at the front of the store, and new automatic doors are on both sides.

Fortunately, that was just before the first big round of winter weather in the local area.

There’s still some repair work that needs to be done at the entrance. Some rock work will be going in to cover some damage still left from the November break in.

“We want to thank the community for being good to us,” said store owner Shelvie Givorns. “There’s still some more work to do before we get completely back to normal, but getting the new doors in is a big thing. I liked to have froze to death before they got them in, but it’s so much better now.”

The store front received some serious damage just past 3 a.m. on Nov. 21 when two suspects crashed through the front door in a stolen 1999 Dodge Ram and made off with an ATM machine. The truck was later found abandoned off I-285 in the metro Atlanta area. It was recovered by police and has undergone a forensic examination for clues to help identify who had been driving the vehicle.

A surveillance video of the break-in went viral, gaining several hundred thousand views on You Tube and Facebook. It’s also been seen on Fox News and on some police-related TV shows.

“It’s amazing how many people have seen it,” Crosby said. “I guess you could say it’s our claim to fame. Our business hasn’t dropped off any, and I haven’t heard the first complaint from a customer. They have been great, and we appreciate that. We think everything will be completed and we’ll be back to normal by the early spring.”

There is one constant reminder of the break-in – the tire tracks that can be seen just inside the door.

“When you see that video,” Crosby said. “you know it’s a stolen vehicle. No one’s going to damage something that’s theirs the way that truck was.”