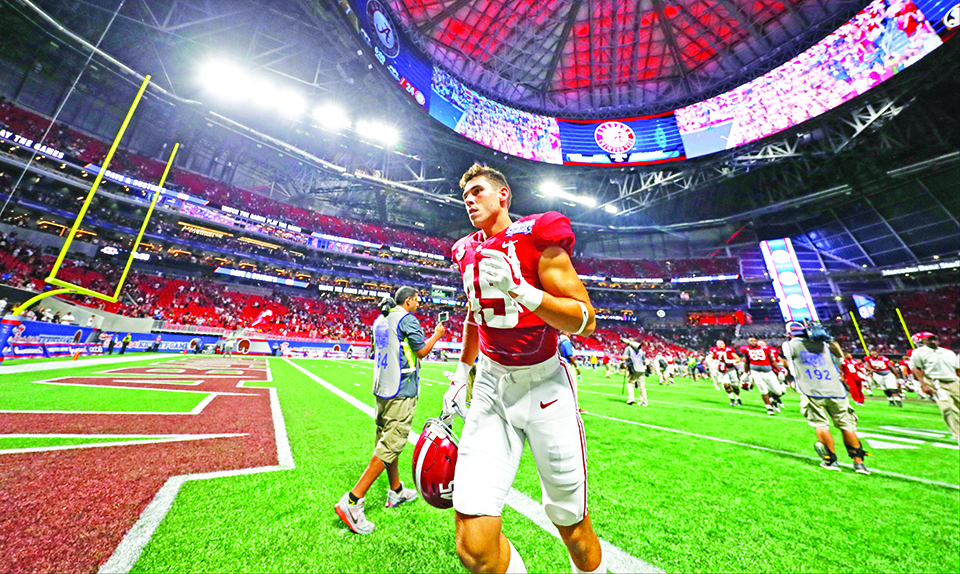 VALLEY — The final play in the final game of Bo Grant’s college football career lifted the University of Alabama to its 17th national title.

It also sparked a spirited reaction.

As soon as wide receiver DeVonta Smith reeled in the title-clinching touchdown pass in overtime of the Jan. 8 College Football Playoff national championship, Grant bolted from the Crimson Tide sideline and onto the field at Mercedes-Benz Stadium in Atlanta.

“I didn’t even see them signal touchdown yet,” Grant said. “I saw his feet hit the touchdown line, and I took off. It was kind of overwhelming, full of emotion.”

Tears of joy rolled down Grant’s cheeks as he knelt to the turf. He couldn’t help but get caught up in the moment.

Grant, a redshirt senior defensive back, had come too far, worked too hard and invested too much to let the euphoria pass him by without soaking it all in. The 2013 Valley High School alumnus, who received little college interest, had punctuated his Alabama career with a second crown.

“This experience has been unbelievable, and really it’s a blessing from God,” Grant said of his five years in Tuscaloosa. “All glory to Him.”

Grant’s journey to Atlanta and Athens and everywhere else his time with the Tide has taken him began in Valley, which he calls a special place with special people.

He is one of them.

Grant was born, raised and educated in the town. He attended W.F. Burns Middle School before moving to Valley High. There, he stood out on the field and in the classroom.

He maintained a 4.0 GPA while starring at defensive end and outside linebacker on the Rams football team.

His combination of brains and brawn, however, attracted few Division I suitors. That changed midway through his senior year.

Grant accepted an invitation to play in the Max Emfinger All-American game in Pensacola, Fla., where he was exposed to a number of college coaches. A few of them, including then-Alabama defensive coordinator Kirby Smart, were impressed by Grant’s performance.

Alabama eventually offered him a preferred walk-on position. For Grant, the decision was a no-brainer.

“After I came to my official here, I kind of fell in love with the place,” he said of Tuscaloosa. “It was the place I rooted for growing up, even though we were close to Auburn.”

Grant departed for Alabama three days after his high school graduation to begin training with the Tide. Immediately, the coaching staff moved him to defensive back, a position he took to slowly but steadily.

Grant climbed up the depth chart as he acclimated to the secondary. By his redshirt sophomore season, in 2015, he had ascended high enough to make the team’s travel squad as a special teams player.

He was the only walk-on to achieve the feat.

“There no shame in being a backup,” Grant said, “because all these guys that were ahead of me are probably going to end up being first-round picks.”

Grant traveled with the team the past three seasons. Alabama advanced to the College Football Playoff in each.

Grant was in Glendale, Arizona,  in January 2016, when the Tide beat Clemson for the national championship. He also was in Tampa, Florida, last January, when the Tigers exacted revenge.

“That’s probably the worst feeling I’ve had after a game,” Grant said of the 35-31 defeat, “just because you’ve gone so long, 14-0, and the last two seconds of the season you have it stripped away from you.”

Grant and his teammates didn’t allow another title to slip away two weeks ago. The thought of losing never even crossed their minds.

After falling into a 13-0 halftime hole against Georgia, which is now coached by Smart, Grant said the Alabama used the intermission to regroup, refocus and recommit to its plan.

“We never lost our belief in one another and belief we were going to win that game,” he said.

Enter Tua Tagovailoa, the true freshman quarterback who would throw three touchdowns en route to Alabama’s 26-23 overtime victory. That included the rope to Smith that set off Grant’s career-capping celebration.

Five years of memories, toil and dedication rushed through his mind—and spilled from his eyes —in the most watershed of moments. He jumped in jubilation with teammates, mingled with former coaches turned competitors and rejoiced with family members who had made the 90-mile trip from Valley to Atlanta.

His mother Mercedes, father Jason, and brother Austin were all there. So was his cousin, Christian McCary.

It was the second of three major achievements Grant will secure since the deflating loss to Clemson. Last May, he graduated with a bachelor’s degree in business management. This May, he will graduate with his master’s in marketing.

Sandwiching a national title between the academic milestones bridged the gap.