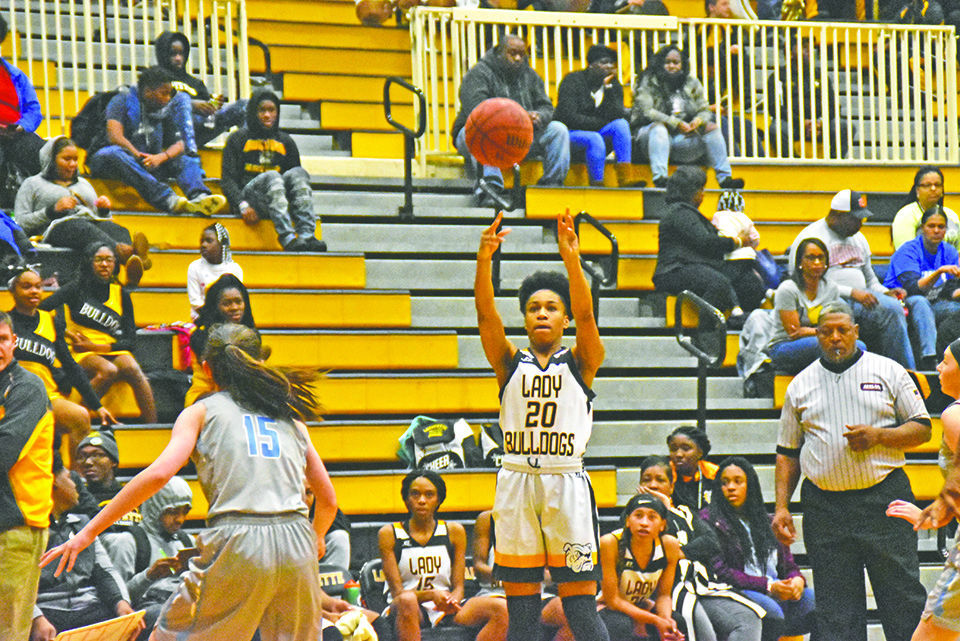 LaFayette High School senior Keaundra Woody (20) attempts a 3-pointer in the second half of her team’s 67-13 home victory on Tuesday over Horseshoe Bend. Woody was one of nine Lady Bulldogs to reach the score sheet. (Photo by Sam Chandler)

After dropping consecutive games to Lanett and Russell County, the Lady Bulldogs (11-10) left nothing to chance in a 67-13 pummeling of Class 2A, Area 8 opponent Horseshoe Bend.

“The last time we played them, I felt like we really came out and we didn’t play with any emotion, no energy, and the game was close, “ Bratcher said. “When you play teams like this, you don’t want to let them think they can beat you.”

LaFayette trailed Horseshoe Bend at halftime in the teams’ Jan. 9 meeting before surging for a 48-28 victory. By Tuesday’s intermission, the Lady Bulldogs led 33-7.

And they didn’t even have their top player, Feliah Greer, whose role was limited due to an ankle injury.

“She probably played only 10 minutes tonight where she normally plays 28,” Bratcher said. “When she was out there, she just wasn’t the same.”

But many of her teammates, including senior Jasmine Pitts, picked up the slack. Pitts scored 11 of her game-high 24 points in the first quarter, as LaFayette jumped out to a 22-5 advantage.

“I had to step up because Feliah was down,” Pitts said. “I couldn’t do it by myself. We had to do it as a team.”

Bratcher deployed a 2-2-1 full-court press for much of the game’s first three quarters. The tactic overwhelmed Horseshoe Bend, which struggled to reach half court, and created a number of turnovers that led directly to points.

Many of LaFayette’s possessions began in the frontcourt following steals. Players like Jaliscia Bledsoe and Monkeliyah Morgan helped set the tone defensively.

“They don’t really score, but at the end of the night, I know that they’re that defensive player, that one that’s going to really cause chaos,” Bratcher said. “They start a lot of that stuff that people don’t necessarily see. They’re the ones that make people make bad passes. They don’t get the credit for what they do, but they’re my dogs.”

LaFayette extended its lead to 54-9 after three quarters before coasting in for the commanding victory. Daijahnna Watson joined Pitts in double figures with 12 points. All nine players on the team’s roster made at least one basket.

Tuesday marked LaFayette’s final area game of the regular season. The Lady Bulldogs finished 4-2, with their two losses coming to Lanett. They will return to home action against Handley on Saturday for senior night.