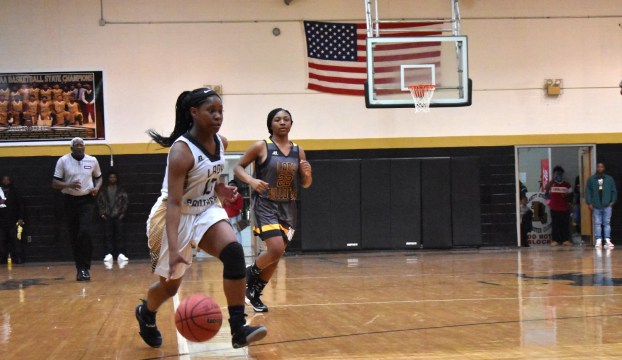 Lanett High School junior Ambria Jackson drives toward the basket in the first half of her team's 46-38 home victory over LaFayette on Saturday, Jan. 20. Jackson recorded a team-high 18 points. (Photo by Sam Chandler)

LANETT — The Lanett High School girls basketball team shuffled out of the gates in its Jan. 5 meeting with rival LaFayette.

But after a slow start, the Lady Panthers rallied in the final quarter to claim a narrow victory.

From the outset, Lady Panthers head coach Charlie Williams deployed a pesky zone defense that his opponent struggled to solve.

“I just didn’t want to get out to a slow start like we did in LaFayette,” Williams said.  “We got off to a real slow start, and that had a lot to do with the outcome of the last game.”

Lanett led 7-3 after one quarter and 22-17 at intermission. Lady Panthers freshman Alyse Madden scored all six of her points in the second period to help her team maintain its edge. Lanett settled into an offensive rhythm it couldn’t find in the opening frame.

But that didn’t take Williams by surprise.

LaFayette freshman Feliah Greer trimmed her team’s deficit to three, 26-23, midway through the third quarter after kissing a layup off the glass. The Lady Bulldogs never pulled closer.

Makyia Broughton answered immediately with a short field goal as Lanett opened a 33-25 advantage entering the final quarter. Her teammate, Ambria Jackson, took it from there.

“I knew it was a big area game, so I just came out hard,” Jackson said. “I think I hit some big shots.”

The victory improved the Lady Panthers area record to 4-0. LaFayette dropped to 2-2.

“We came out and I felt like we were just so flat. We never got going,” Lady Bulldogs head coach Michael Bratcher said. “At no stretch did I feel like we really played very good offensively or defensively. We had too many mental mistakes.”

Greer posted a game-high 21 points for LaFayette, while Jasmine Pitts chipped in 10. Broughton contributed 11 points to join Jackson in double digits for Lanett.

Both teams will return to area action on Tuesday. Lanett will play at Reeltown, and LaFayette will host Horseshoe Bend.