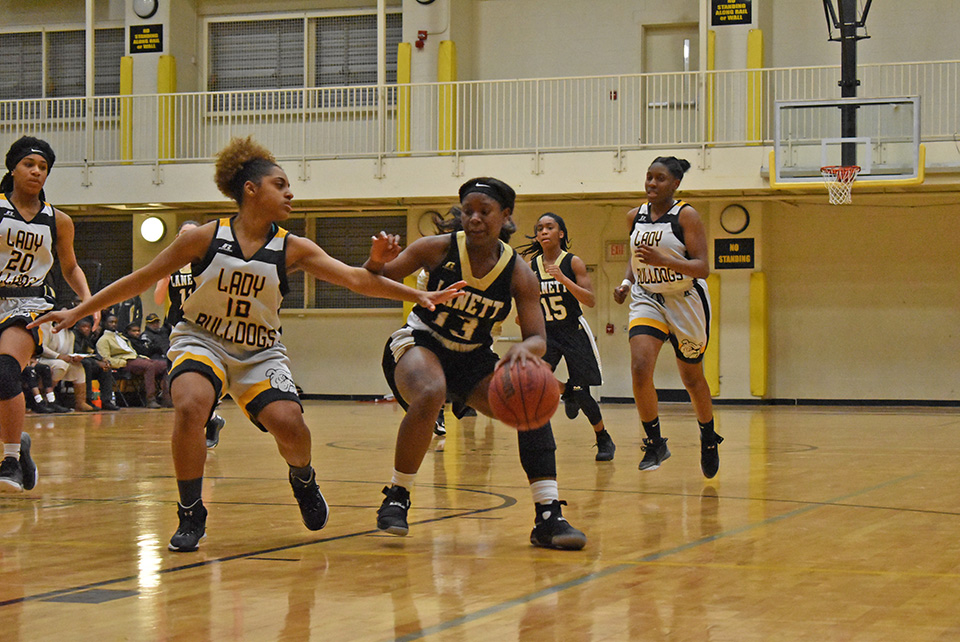 DRIBBLING TOWARD THE BASKET — Lanett High School junior guard Ambria Jackson (13) dribbles toward the basket on Friday night. She scored 15 points in her team’s 58-53 victory over rival LaFayette. (Photo by Sam Chandler)

Freshman Alyse Madden drained the go-ahead jumper with a minute left in regulation to help Lanett secure a 58-53 comeback victory on Friday night over its Class 2A, Area 8 rival.

The Lady Panthers outscored LaFayette 25-9 in the final frame.

Lanett leaned heavily on younger players like Madden to key the rally. She poured in 11 of her team-high 16 points in the fourth quarter, when a few of the team’s veterans were sidelined due to foul trouble.

The youth stepped up.

“My freshmen Hailey Robinson, Jayla Higgins and Erin Darden, they gave me a great boost off the bench,” Williams said. “After that, it was just time for my players to be players.”

LaFayette led 46-35 with five minutes remaining. That’s when Lanett flipped a switch. Madden canned a pair of 3-pointers from the right wing, and Ambria Jackson converted a coast-to-coast layup to pull their team within two.

Madden sank her pivotal jumper soon after. As it fell through the hoop, the Lanett crowd rose to its feet and expelled a roar.

“I feel like the game almost became too big for them at that moment,” he said. “They’re not used to being the team that’s hunting. They’re used to being hunted.”

Bratcher has only beaten Lanett once in his eight-year tenure at LaFayette. Until the tail end of Friday’s game, his second win seemed probable.

Feliah Greer and Jasmine Pitts helped the Lady Bulldogs establish a halftime lead, 23-21, that it tried desperately to preserve as time elapsed.

But they couldn’t stop their foe in crunch time.

“The whole game Lanett believed they were going to win, and we almost had this feeling about us that we were going to lose,” Bratcher said. “We have to learn now how to be the winners and not be the ones who expect to lose.”

Greer and Pitts finished with 15 and 13 points. They were joined in double figures by teammate Keaundra Woody, who had 10.

Jackson and Makyia Broughton added 15 and 12 points for Lanett. The Lady Panthers improved to 2-0 in area play with the victory. LaFayette (7-8) fell to 1-1.

The Lanett girls (5-3) parlayed their momentum from Friday’s victory into Saturday’s game at Class 6A Russell County, which they beat 62-52.

Madden recorded a triple-double by totaling 11 points, 14 rebounds and 10 assists, while teammate Octavia Wright recorded a double-double. She scored 13 points and corralled 18 rebounds.

Broughton had a team-high 18 points.

“It was a good win following an emotional win against LaFayette on Friday,” Williams said.