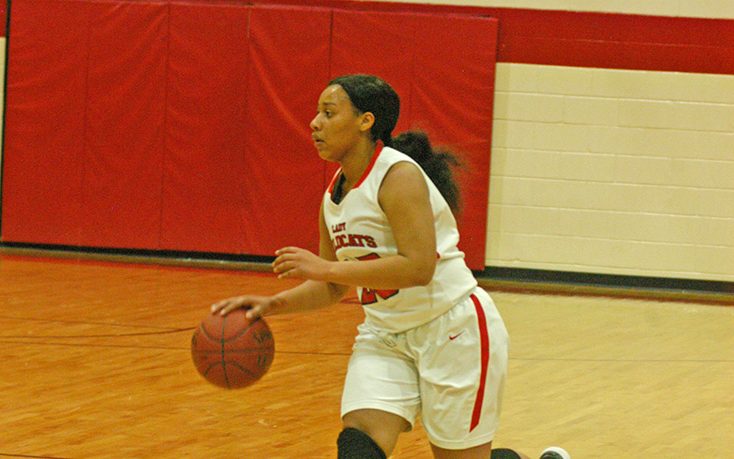 STAR ROLE — Springwood School senior Amaya Battle is averaging close to 14 points per game for a team that is exceeding expectations. The Lady Wildcats are 13-4 entering tonight’s clash with Chambers Academy. (Photo by Wayne Clark)

LANETT — Rick Johnson saw the disappointment on his players’ faces after Tuesday’s 19-point loss to Glenwood.

He didn’t blame them for feeling down. Defeat stings.

But Johnson, the Springwood School girls basketball coach, also saw the bigger picture. He shared it with his team.

“I told them last night in the locker room after the game, ‘If I had told you in November that you were going to be 13-4, everybody in this room would take it,’” Johnson said on Wednesday.

He would have, too.

The Lady Wildcats graduated five seniors from last year’s squad that advanced to the state semifinal. Among the group was Tazsa Garrett-Hammett, the all-time leading scorer in school history and two-time reigning AISA Player of the Year.

She headlined a veteran class that contributed to Springwood’s state championship run in 2016, when it went 30-0, and state runner-up finish in 2015.

At the time, the Lady Wildcats’ current group of seniors won only three games as freshmen on the junior varsity.

“I don’t think our expectations were that we were going to be undefeated,” Johnson said. “We knew we had added some players since that time, and I think we were pretty optimistic that we would have a winning season.”

But not even he expected the soaring results.

The Lady Wildcats bolted out to a 9-1 start and have since improved to 13-4. They are ranked fifth in the latest Alabama Sports Writers Association AISA state poll.

Springwood had sustained only two defeats before falling twice in the past week to region foes Lee-Scott and Glenwood, which are ranked third and first in the state.

“As you have success, you seek more,” Johnson said. “Once they saw that we had the ability and some of the ingredients for being a good team, they’ve gotten behind that.”

No player has had a more tangible impact than senior Amaya Battle, who entered the season as the team’s leading returner in scoring, rebounding and minutes played. She has only elevated her game.

Battle is averaging close to 14 points per outing, though she possesses the offensive arsenal to pour in 20 or more on any given night.

“She’s a scoring threat,” Johnson said. “She shoots the ball as well as anybody we’ve had here.”

Battle’s fellow senior, Elizabeth McClendon, has provided the team with a strong defensive presence, while sophomores Andie Martin and McKayla Barber have stepped into prominent roles.

The varsity squad, meanwhile, advanced to the final four in 2017 before losing to Glenwood. Another deep playoff run is within the realm of possibility.

Johnson said his team, which has adopted a slower, possession-oriented approach this season, still has room to grow.

It will have a chance to do that tonight.

The Lady Wildcats will host Chambers Academy (7-8) for a 7 p.m. tipoff at Boswell Gymnasium. In December, Springwood topped its rival, 52-41.

But Johnson knows his team will be in for a fight.

“Chambers will very rarely let you outwork them,” he said. “They are feisty. They compete.”

So, too, do his Lady Wildcats, whose undaunted mentality has carried them to unforeseen heights.