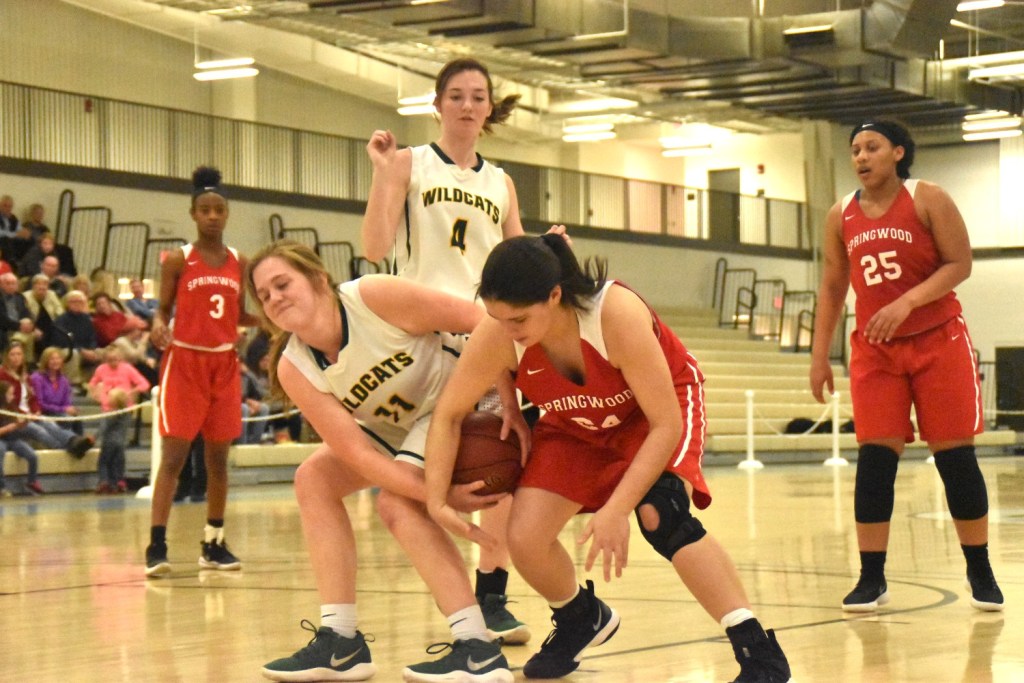 Springwood School junior Allie Davis (24) fights for possession in the first half of her team's 37-28 loss to Edgewood Academy on Thursday in the first round of the AISA Class AAA Region 1 Tournament at the Montgomery Multiplex in Montgomery, Ala. (Photo by Sam Chandler)

MONTGOMERY — The Springwood School girls basketball team will not be making a fifth consecutive trip to the final four.

The elite eight is out of the picture, too.

The Lady Wildcats (14-7) suffered a season-ending loss to Edgewood Academy, 37-28, on Wednesday in the first round of the AISA Class AAA state tournament at the Montgomery Multiplex.

A win would have clinched one of eight spots in next week’s state tournament.

“You’ve got to give them credit,” Springwood head coach Rick Johnson said of Edgewood. “They had a good game plan, and I thought they executed pretty well.”

The Lady Wildcats had difficulty swiping the ball away with the same frequency in their second matchup.

“The live ball turnovers we were taking to get layups in December, we weren’t getting those turnovers today,” Johnson said.

Springwood and Edgewood were tied after one quarter, 7-7. The Lady Wildcats fell into an early 7-2 deficit, but senior Amaya Battle canned a jumper and a 3-pointer to close the frame.

Springwood struggled to solve Edgewood’s zone defense in the second period. Edgewood blanketed Battle and created a number of turnovers. The only points Springwood notched came on a pair of Dee Williams’ free throws.

“That zone gave us trouble,” Johnson said. “We just couldn’t find seams that we wanted to find.”

Edgewood darted out of the halftime locker room and started the third quarter on a 7-0 run. It led Springwood 23-9 midway through the period. C.J. Weldon, who scored 11 points,  knocked down one of her game-high three 3-pointers during the run.

But Springwood countered with a 7-0 surge of its own. Williams sank two more free throws, Battle nailed a jumper, and McKayla Barber hit a 3 to make it 23-16.

Springwood entered the final frame trailing 25-16. But Johnson kept faith that his team would find a way.

“You just can’t give up in a game,” Johnson said. “You just don’t know what’s going to happen.”

Springwood trimmed the margin to four, 25-21, less than two minutes into the fourth quarter after Elizabeth McClendon and Battle converted field goals.

But the Lady Wildcats didn’t come any closer. Edgewood closed the game on a 13-7 run fueled by transition layups. Springwood, meanwhile, had a hard time getting shots to fall.

Battle finished with a team-high 12 points. Williams had seven.

This is the first time since 2013 that Springwood will not be in the state tournament. Yet Johnson didn’t allow that reality to tarnish his assessment of the season.

“I don’t think there’s a person alive that couldn’t say they exceeded our expectations,” he said.