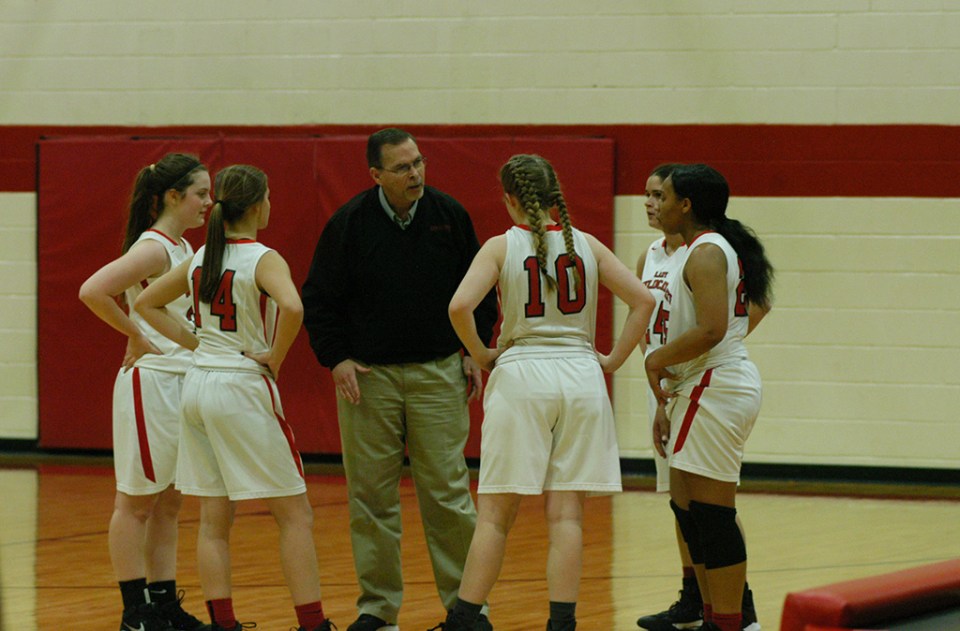 Springwood School junior Allie Davis (24) saves the basketball from bouncing out of bounds in the first half of her team’s 43-24 loss to Glenwood on Monday night. (Photo by Sam Chandler)

The Lady Wildcats took turns passing and cutting as they waited for the perfect shot. Eventually, Amaya Battle attempted a 3-pointer from the left wing.

But it didn’t fall. Neither did Glenwood.

The top-ranked team in the AISA staved off an upset bid from fifth-ranked Springwood, thanks to a furious finish inside Boswell Gymnasium. The Lady Gators closed their 43-24 victory on a 14-1 run.

Springwood (14-6) had drawn to within six, 29-23, as it searched for the ideal look midway through the final period.

“We’re not trying to stall. We’re just trying to look for the gaps,” Lady Wildcats head coach Rick Johnson said. “I did tell them, as is the case with most high school teams, when you make them play a little bit more defense, they can lose their attention span a lot quicker.”

Springwood had ample reason to adopt a patient approach. It is what enabled them to claw back into the game after falling behind by double digits in the first quarter.

The Lady Wildcats trailed 13-2 at the end of the first period and 24-12 at halftime. Then, they settled down.

Dee Williams sank a pair of open jumpers as Springwood made it a nine-point game, 29-20, entering the final frame.

“We were pretty patient moving it and finding some openings,” Johnson said. “I thought that was a part of that third quarter.”

Battle, who posted a team-high 12 points, drilled a 3 from the wing to start the fourth. The Lady Wildcats began their lengthy possession minutes later. The game still remained in reach, even though Springwood came up empty

Glenwood extended its edge by only one, 30-23, after converting 1-of-2 free throw attempts its next time down the floor. Springwood couldn’t counter.

The Lady Wildcats turned the ball over after crossing half court, despite diving attempts to recover possession from several players. The Lady Gators’ Quan Holton gained control and raced down the court for a layup.

Holton recorded a game-high 15 points, including five in the final quarter. Springwood never regained its footing, as its shooting went cold down the stretch.

“I thought we gave a demonstration of our ability and what we can do,” he said. “Hopefully, we’ll move that forward into practice and get ready for the region tournament.”

Springwood will begin play in the AISA Class 3A, Region 1 Tournament on Thursday at the Montgomery Multiplex. It will need to win its first-round game in order to secure a spot in next week’s state tournament.