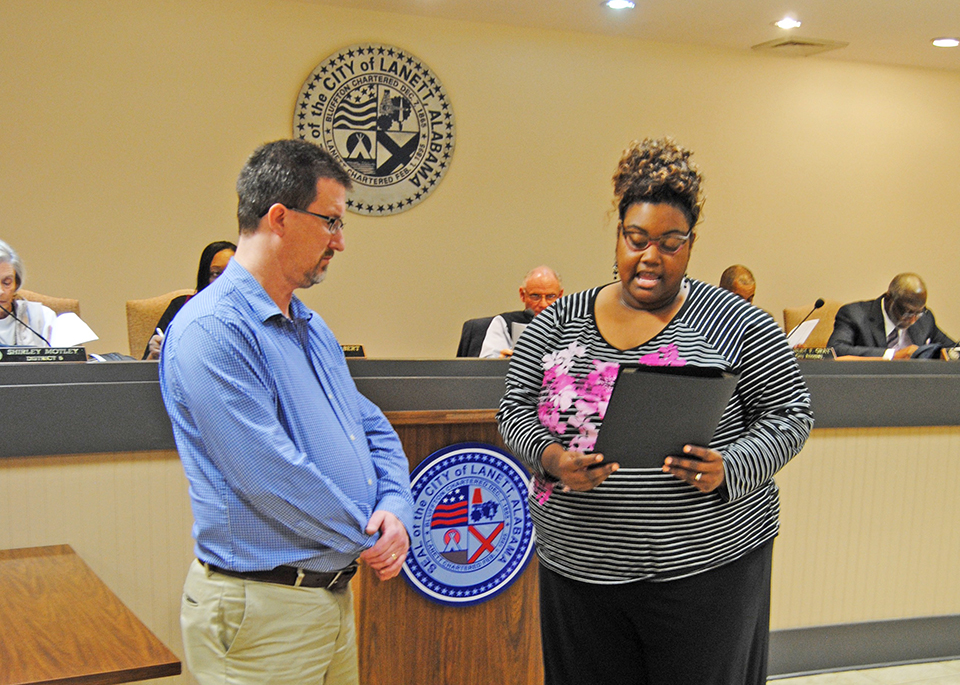 PROCLAMATION APPROVED — The Lanett City Council has approved a proclamation recognizing January as Human Trafficking Awareness Month in the city. Council Member Angelia Thomas (right) read the proclamation aloud at Monday’s meeting of the city council and presented a copy to Adrian Carpenter (left) of the Chambers County Circle of Care Center for Families. “It goes against the core principles of individual freedom and civil rights that our state and nation stand for,” the proclamation reads. (Photo by Wayne Clark)

LANETT — The Lanett City Council has awarded a contract for Phase One of its streetscape project. Chris Clark Grading and Paving, Lanett, will do the work for $294,263.

The Alabama Department of Transportation reviewed the bids and concurred that Chris Clark was the low bidder.

“It’s an amount that’s within our budget,” said Lanett Mayor Kyle McCoy at Monday’s council meeting. “This has been a long time coming, and we are so glad to be here. We started applying for this two years ago.”

A good bit of the sidewalk work already has been done along North Lanier Avenue. The contract award means the project will be continuing in the downtown area, with the pace of work increasing as the weather improves.

In a related matter, the city approved a contract for Goodwyn, Mills and Cawood, Montgomery, to do the construction engineering and inspection services along North Lanier Avenue. The contract amount is for $44,139.45.

The council also approved a firefighter grant application not to exceed $220,000. If approved, the city would pay five percent of the cost of firefighting equipment, with the federal government paying 95 percent.

The Lanett Electrical Department recently received a new bucket truck. It is a 2018 Freightliner with many more capabilities than the 1999 model it is replacing. David DeLee, superintendent of the department, had it parked outside city hall for council members to see. A heavy rainstorm was underway when the council meeting ended, so DeLee offered to display the new vehicle at another time.

McCoy and members of the council thanked the city’s first responders for the work they did in last week’s winter storm.

“Last week during the storm, some of our people were up all night,” McCoy said. “The police department worked wrecks, the street and water departments had plenty to do, and the electrical department was on standby in case the power went out. I think our city is at its best when we are in those kinds of situations. I think we were fortunate in terms of wrecks. We didn’t have any major ones. Most of them were people going into slides.”

McCoy added that Steve Crawley and the men of the Lanett Street Department displayed ingenuity in using the circumstances of the storm to locate manholes and valves that had been covered over in street paving.

“They marked the spots, and we know where they are now,” McCoy said.