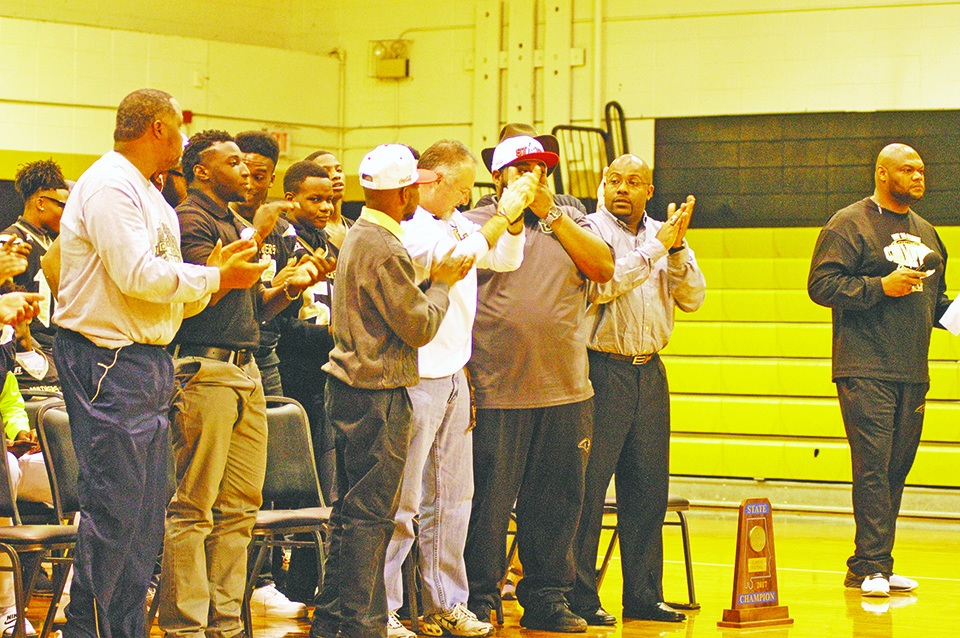 A pep rally was held on Saturday in the Lanett High School gymnasium celebrating the football team’s 2017 season in which the Panthers went 15-0 and captured the Class 2A state championship. The coaching staff stood in the front row and applauded the team’s accomplishments. (Photo by Wayne Clark)

It was the 120th anniversary of the city school system, and the 2017 football team won the Class 2A state championship on Dec. 8.

Several weeks ago a celebration was set for Saturday, Jan. 27. A parade was to take place from the high school to downtown Lanett, but with rain in the forecast, the parade proposal was changed to a community-wide pep rally in the LHS gym.

The Golden Panther band played the familiar fight songs from this past season; cheerleaders performed their acrobatic routines; fun and games were held on the basketball court, and the football team received a thunderous ovation as the players walked in single file.

“Thank you so very much,” head coach Clifford Story said to the crowd above that din. “This is overwhelming!”

The players and coaches sat in rows of foldable chairs that were placed on a big tarp on the court. The coaches sat on the first row and acknowledged the applause from the crowd assembled inside the gym.

Lanett Mayor Kyle McCoy welcomed everyone and shared some stories from this past season.

“I help drag the chain up and down the sideline and sometimes get to hear what the opposing players and coaches are saying,” he said. “They’d say things like ‘We just can’t guard that No. 1 (6-foot-6 receiver Anquaevious Pollard). All they have to do is lob it up to him and he can out jump everyone for it, and that No. 2 (Terrion Truitt), he’s so fast when he gets around the corner it’s hard to run him down.’”

The mayor went on to say that the team had made the entire community very proud.

“No fan base anywhere was more appreciative and excited about what you did in Tuscaloosa than were your fans in Lanett,” he said.

“We talk a lot about being family at Lanett,” said Superintendent Phillip Johnson. “We need to recognize that it takes a lot of weeks away from family on the part of these coaches to achieve what we did this year.”

Johnson said that the school system reached a milestone on Saturday, hitting its 120th birthday, and has been on a roll in athletics the past few years.

“It’s been a busy 120 years, and we expect the next 120 years to be busy as well,” Johnson added. “This is a good school. The players and the coaches are proof of that.”

Story took the microphone, introduced each coach, player and member of the support staff. That group included the managers, ball boys, aqua team — led by Kristina Story and the water girls — and the school’s No. 1 fan, Marshall Minton.

Two players, Jaren Ross and Braylon Harrington, spoke to the crowd. Ross, who’s one of the top students this year at LHS, said the entire season had been a blessing and that it had gone by fast. “We started with winter workouts,” he said. “We had a spring game at Jacksonville State, then worked out in very hot weather in the preseason and it ended on a cold, snowy day in Tuscaloosa.”

Ross thanked the coaches for giving him the chance to play and for believing in him.

Harrington, who scored the winning touchdown in the state championship game, said that it was awfully hard pushing that blocking sled on those hot, August days, but there was a nice reward down the road in Tuscaloosa.

“We had crazy weather in the beginning of the season and at the end,” he said with a laugh.

Offensive coordinator Chip Seagle said that coaches at other schools had asked him what was special about Lanett.

“I tell them that we have 42 kids with ants in their pants,” he said. “Their work ethic came from their parents, grandparents, aunts and uncles who worked in the mills here in the Valley.”

Clifford Story thanked Johnson for giving him the job of head football coach in 2009 and then talked to the crowd about how his rise to the top had not been an easy one.

“We had a pretty good year that first season, going 6-4 and making the playoffs, but that second year was rough. We lost players to other schools and some of them were injured. At one time we were practicing with 18 players.”

That team lost its first nine games. A win over Loachapoka in the final game of the year kept the team from having a winless season. What the team went through that year laid a foundation for better things to come, he said.

Story talked about things getting so bad that season that he one day dropped to the floor of the fieldhouse and wept. “I asked God, ‘Why did you lead me to Lanett High?’”

He confided that moment of weakness to Jennifer Boyd, who was then a business teacher at the school. She’s now the principal.

“She told me to get off the floor and walk the halls of the school, believing that something really special will happen. ‘God has something special for you,’” she told me. “It changed my whole world.”

In a rising voice and gesturing to his coaches and players, Story said, “We are your 15-0 Lanett Panthers, the best team in Lanett High history! Let’s hear it for your Lanett Panthers!”

It just about brought the house down.

The program concluded with a film presentation in the auditorium.