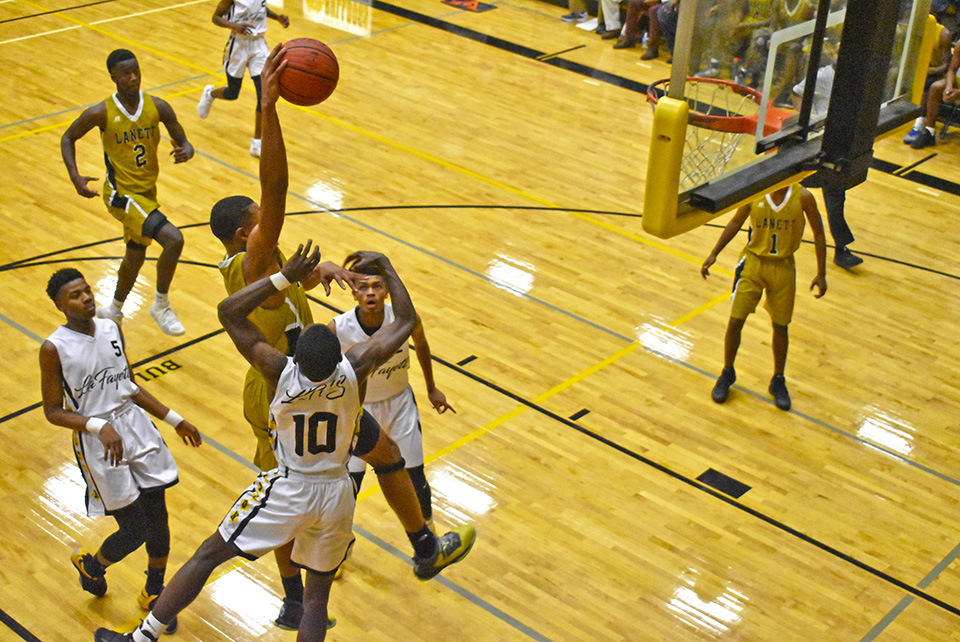 Lanett High School senior forward Emanuel Littles (in gold) drew a number of fouls in his team’s 64-55 victory over LaFayette on Jan. 5. He finished the game with 17 points, 15 of which came in a pivotal second half. (Photo by Sam Chandler)

So excuse the cold shooting that may surface at the beginning of Saturday’s matchups between Lanett and LaFayette. Any lingering frost should melt away quickly in the season’s second edition of this heated rivalry.

“Every time we play them, it feels like the biggest game in the world,” LaFayette head coach Obadiah Threadgill said. “It never gets any easier. It doesn’t matter where we play them.”

The boys game, which has been rescheduled from tonight to Saturday at 4:45 p.m. EST, pits two of the top squads in Class 2A against each other. Lanett (10-5, 2-1 in Area 8) was ranked fourth in the latest Alabama Sports Writers Association state rankings. LaFayette (14-5, 2-1) was ranked seventh.

On the line will be bragging rights and, most likely, the right to host the area tournament in February. After Saturday’s meeting at Lanett, it is probable that both teams will breeze through their remaining area games against Horseshoe Bend and Reeltown.

In the teams’ first meeting, they entered halftime knotted at 22-22. Then, Lanett relied on its post players to pull away. Senior forwards Anquaevious Pollard and Emanuel Littles combined to score 28 points in the second half en route to a 64-55 victory at LaFayette.

“It’s not so much that we learned anything. It was more like what we knew was reinforced,” Threadgill said. “Again, Lanett is going to be what Lanett is. They are not going to be an easy task, ever.”

The Panthers have won four of their past five games since their tilt with LaFayette. Carter said his team has started to find its groove.

The majority of his lineup missed the first month of the season due to the football team’s state title run. Now, his roster goes 12 deep without much, if any, production decline.

“This team, because of the fact that we are so athletic, could actually be the best team I’ve coached,” Carter said. “They’re so athletic, so talented, and they’re beginning to buy into some new things that we’re doing.”

That includes a pressure defense, which has vexed opponents. In the Panthers’ most recent victory —a 75-54 thumping of Valley on Monday — the Rams crumbled under the constant duress.

LaFayette will aim to avoid a similar fate by playing what Threadgill terms a “cerebral” brand of basketball.

“We have to do a better job on the front end of making good decisions with the basketball, taking care of it, sharing it, getting into our offense, being patient,” Threadgill said. “It’s really a cat-and-mouse game we’re playing with them. We aren’t physically big enough and strong enough to fight fire with fire.”

The Bulldogs have won their last three games since falling to Lanett. They downed Valley in their most recent win last Friday, 49-46, on a buzzer-beating 3-pointer from point guard Corey Boston.

It will largely be up to him, along with fellow sophomore guards Matavais Burton and Jordan Wallace, to break Lanett’s press.

The boys contest will follow the girls game, which should tip off around 3:15. Lanett (7-4)  won the first time around, 58-53,  after it erased a double-digit deficit in the fourth quarter. The Lady Panthers have secured victories in four of their past five outings. LaFayette (10-8) has since won three straight. Both teams earned nominating votes in this week’s ASWA poll, though they stayed on the bubble and remain unranked. A win by either team would bolster its credentials.