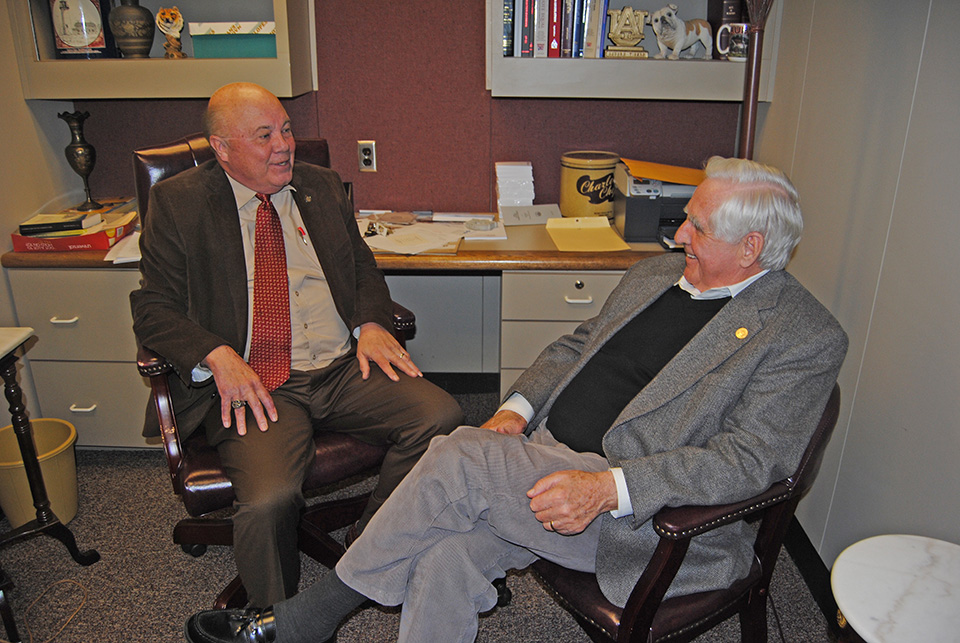 A VISIT WITH A LEGISLATOR — Alabama Department of Senior Services Board Chairman Ray Edwards (right) made a visit to the State House on Tuesday afternoon to meet with local legislators. He spoke with District 37 Representative Bob Fincher (left), who happened to be on a break. The two spoke at length about issues being discussed in the current legislative session. (Photo by Wayne Clark)

MONTGOMERY— For some time now, elected officials in east central Alabama counties that border Georgia have been asked by their constituents for changes in the cable TV service they receive.

Specifically, they want to be able to watch Alabama stations. WSFA 12 News in Montgomery and Alabama Public Broadcasting are at the top of the list in those requests.

said that District 37 Representative Bob Fincher was trying to get something done about it.

“He’s working on statewide legislation to address it,” he said. “We’ll continue to encourage cable providers to give people what they want.”

On Tuesday, The Valley Times-News discussed this topic with Rep. Fincher, who is a retired educator, at his office in the State House.

The first step in bringing  these changes, he said, is for the county commission to file a request to have it done.

“It’s a federal matter and has to be done through the FCC,” he said of the Federal Communications Commission. “We’ve been working on getting Alabama Public Television in our district. We have talked about this with the station managers in Birmingham and Montgomery.”

In TV jargon, east Alabama residents live in what’s called “orphan counties.” It’s kind of like being left on someone’s doorstep, but Fincher is trying to change that.

“I have a resolution I’m going to introduce that says that Alabama residents have a right to have Alabama TV reception,” he said. “It’s a citizenship issue. My constituents need to know what is going on in the state. Another issue is that weather moves from west to east. If an Atlanta station tells you a tornado is on the ground, chances are that bad weather system has already come through east Alabama.”

Fincher said this is an issue that affects the entire district.

“There are people in Randolph County who have been working this really hard, especially retired people living on Lake Wedowee,”
he said. “They want Alabama news.”