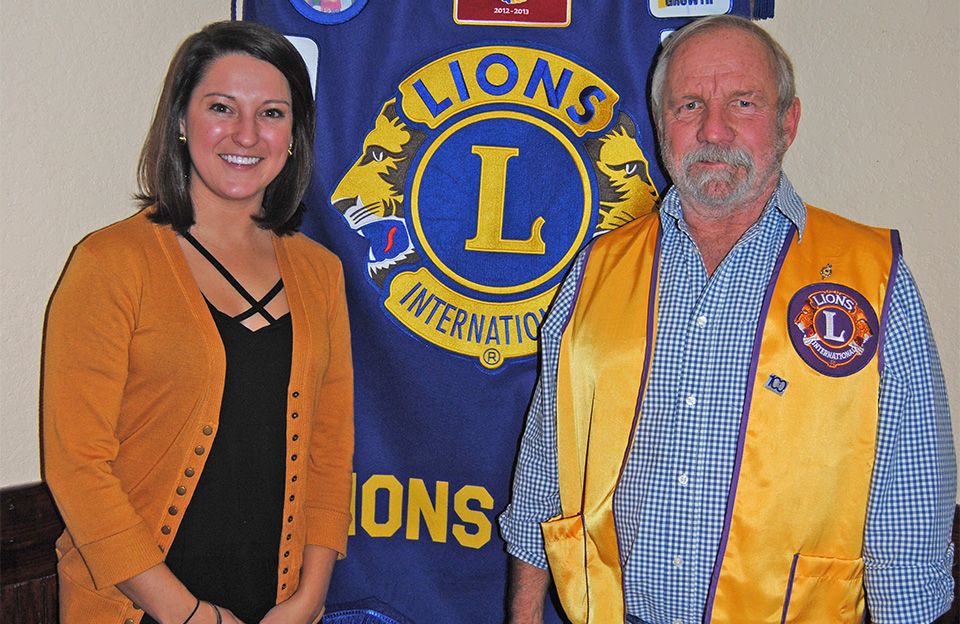 TALKING ABOUT BRANDING — Kimberly Carter (at left) of the Chambers County Development Authority discussed the ongoing branding campaign at Monday’s meeting of the Valley Lions Club. The red and gray “Strength Woven In” logo is being seen in more and more places these days. “It’s been a countywide effort,” she said. “We’ve gotten very good response to it.” At right is Phillip Sparks, club president. (Photo by Wayne Clark)

VALLEY — Kimberly Carter of the Chambers County Development Authority staff talked about the county’s “Strength Woven In” identity at the Monday meeting of the Valley Lions Club.

Carter, the CCDA’s existing industry/business retention specialist, had a PowerPoint presentation outlining the genesis of the Strength Woven In brand, how it fits the local community and why it should be broadly known.

A brand, said Carter, “is what you are known for, what people say about you when you are not around. It captures who you are and where you want to go.”

The branding campaign began in November 2014 as a cooperative effort on behalf of the CCDA and the Greater Valley Area Chamber of Commerce and was funded by a grant from PowerSouth Electric. Redsage Communications, an Alabama-based marketing firm, helped with its implementation.

Two local focus groups of 31 people looked at the big picture of having a local identity to promote. This evolved into a six-member steering committee exploring two primary questions: (1) What makes Chambers County great? and (2) What do we want others to know about Chambers County?

“Our first task was to create a tag line and a logo,” Carter said. “We spent over 109 hours on this, and the things that kept popping up were ‘grit,’ ‘resiliency,’ ‘being progressive despite the loss of 25,000 textile jobs.’”

The final shutdown of the local textile industry in 2008 was a driving factor in unemployment soaring to more than 22 percent in February 2009.

The grit and resiliency of local people, said Carter, is what kept the community focused on building back an industrial base. This is what “Strength Woven In” is all about, she said.

Redsage owner Ellen Didier was very helpful in the  process of settling on the tag line. “We looked at Dallas, Texas, Birmingham, Ala., St. Petersburg, Fla. and a lot of other communities to see what they were doing in the way of branding ideas,” Cater said.

Strength Wove In was selected over other potential tag lines such as “It Takes Grit,” “Built With Grit,” “Drive Forward,” “Fighting Spirit” and “We’ve Got This.”

The logo that was selected shows a woven pattern in red and gray colors outlined with the map of Chambers County.

It’s fast-becoming one of the most often seen images in the local area. It’s on letterheads, shirts, caps, car tags and county vehicles. A county highway department dump truck and motor grader displaying the logo were seen in the recently Valleywide Christmas Parade.

“We’ve been working on logos for the cities and towns, school systems and utility providers for them to have logos with the Strength Woven In theme. One of my favorites is the one for Bradshaw-Chambers County Library.”

Appropriately enough, the library has the red and gray weave pattern in the shape of an open book.

The Town of Waverly has the image in the shape of a giant oak tree and the Huguely Water Authority has a faucet with a big drop of water on that pattern.

Carter thanked Commissioner Sam Bradford, a Lions Club member, for being a principal advocate for the branding campaign. “He’s the chairman of a committee spearheading this project,”  she said. “It’s been an intensive undertaking. We have spoken to lots of civic clubs. We made this presentation last week in LaFayette.”

The campaign recently received a prestigious award from the Southeastern Economic Development Council.

“We received it in a program they hosted in Savannah, Ga.,” Carter said.

Not all of the logos are in red and gray; The one for the Chambers County School District is in blue and gold. With these colors, the apple-shaped logo promotes the system’s two high schools, Valley and LaFayette.

The Lanett City School System has a Strength Woven In logo in gold and white in the shape of a big L.

“We’d rather have people participate with us than to alienate them,” Carter said.

In the future, the Strength Woven In logos may be displayed on banners on utility poles and on signs at the Chambers County Courthouse and at the annex in Lanett.

“We are excited about this,” Carter said, “and we’re excited to have some Point University marketing students working with us on it.  The logo will soon be displayed on courthouse doors and on offices. Gee looking for it.”

It’s been a total team effort to do this, and we’ve enjoyed doing it.”

Bradford said that Chambers County has an excellent team in the CCDA. “Kimberly, Valerie Gray, Chris Busby and Tammy Johnson make up a heck of a team working for everyone in Chambers County,” he said. “It’s been a long journey working on this branding campaign, but it[’s been a good project. We are starting to see the logo on the county and city web sites.”

Carter said everyone at the CCDA was well pleased with the recent announcement of John Soules Foods coming to Valley. This could mean up to 500 new jobs for the local community over the next five years or so. “They will be taking pre-processed chicken, cutting it, seasoning it, breading it and packaging it,” she said. “I’ve seen their products at Valley Walmart. I’ve taken it home and tried it. It’s really good.” 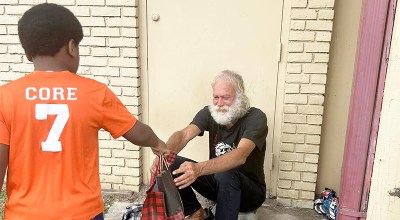