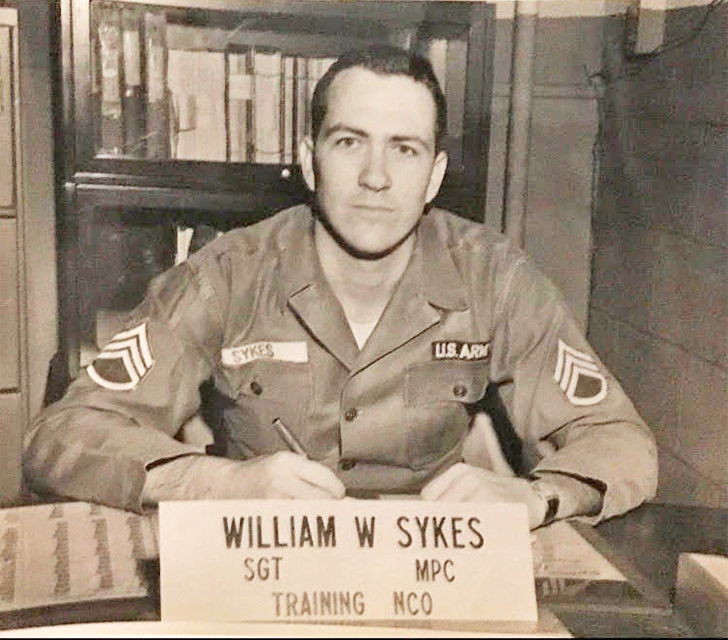 Mr. Sykes was born May 13, 1934 in Island Grove, Fla. to the late Morgan W. and Gladys Hardee Sykes. He was the fourth of nine children. He went to school in Island Grove and Hawthorne, Fla. until he joined the Army May 7, 1952 . While stationed in Fort Benning, Ga. he met Mary Marlene Hudmon. They married on Sept. 26, 1954, at Pine Grove Methodist Church in Beulah, Ala. He and Marlene had five children, They were born in different states and overseas while he was serving his country.

Bill was proud of his service to his country. He served in the Korean War as an infantryman, where he was wounded by enemy action in 1953. He was shot in the shoulder while engaged in combat in the Battle on Pork Chop Hill. For this he received a Purple Heart.

After the war, he re-enlisted and served in the Military Police (MP) corps until he retired. In addition to serving in the Korean War, he served three years in Germany and in the Vietnam War. Bill received 21 medals and awards while in service, which included Bronze Star and two Purple Hearts. When Bill retired from the Army in May 31, 1972, he and his family moved to Beulah where they had purchased a farm prior to his retirement, thus starting Sykes Farms. He bought a dump truck and pulpwood truck to help with clearing his land and started Sykes Land Clearing.

From the pulpwood truck. he progressed into log trucks and equipment, starting Sykes Logging Company. Both of his sons worked with him and grandsons went to the woods with their “Paw Paw” when they could climb up in the truck until they were old enough to “go to work.”

When the wood business dropped off, Bill retired for the second time. Bill attended both Beulah Methodist and Beulah Baptist churches while living there. He was proud of his family, his country, his farm, and his cows. He was a hard worker and did not care much for slackers. He provided for his family and taught his sons and grandsons to do the same.