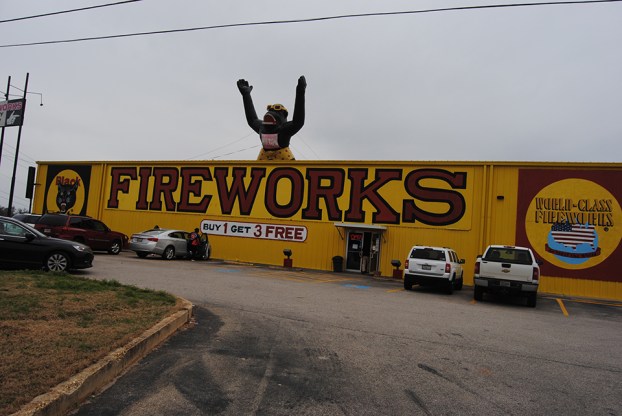 People traveling along I-85 are well familiar with Wilton, the huge inflated gorilla that sits on top of the Fireworks Warehouse, located at Exit 77. The business is open year round but has two very busy periods – July 4th and Christmas/New Year’s. (Photo by Wayne Clark)

LANETT — Sunday was the second busiest day of the year for the Fireworks Warehouse, located just off Exit 77 on I-85. Approximately 400 people came to the store on New Year’s Eve to purchase fireworks for the big celebration at midnight.

The big store is open year round, but the busiest times by far are the days leading up to July 4th and the Christmas/New Year’s holiday. The company has a second store in Phenix City.

For years, Georgia residents have been coming across the state line to Alabama to purchase fireworks for the Fourth and for New Year’s. That’s because it was against the law to sell fireworks in the state. Those laws have been relaxed, but lots of Georgia people still cross the state line to make their purchases. There are some fireworks stores in the metro Atlanta area, but there are yet to be the big stores like Fireworks Warehouse offering a huge variety of items at low prices.

“We still have a lot of people coming here from LaGrange, Newnan, Fayetteville, and Peachtree City,” said Store Manager Marsha Pickens. “But we also have lots of folks coming from Chambers County and other areas on the Alabama side.”

Famous for “Wilton,” the huge inflated gorilla on the roof, the Fireworks Warehouse has a huge assortment of firecrackers, missiles, rockets, and spinners. They have lots of items that go BOOM! and light up the night time sky, creating fun for people of all ages.

EDITOR’S NOTE: This is the second in a four-part series looking ahead to the new year through the eyes of area... read more