Officials congratulate workers for efforts in clearing up snow, ice 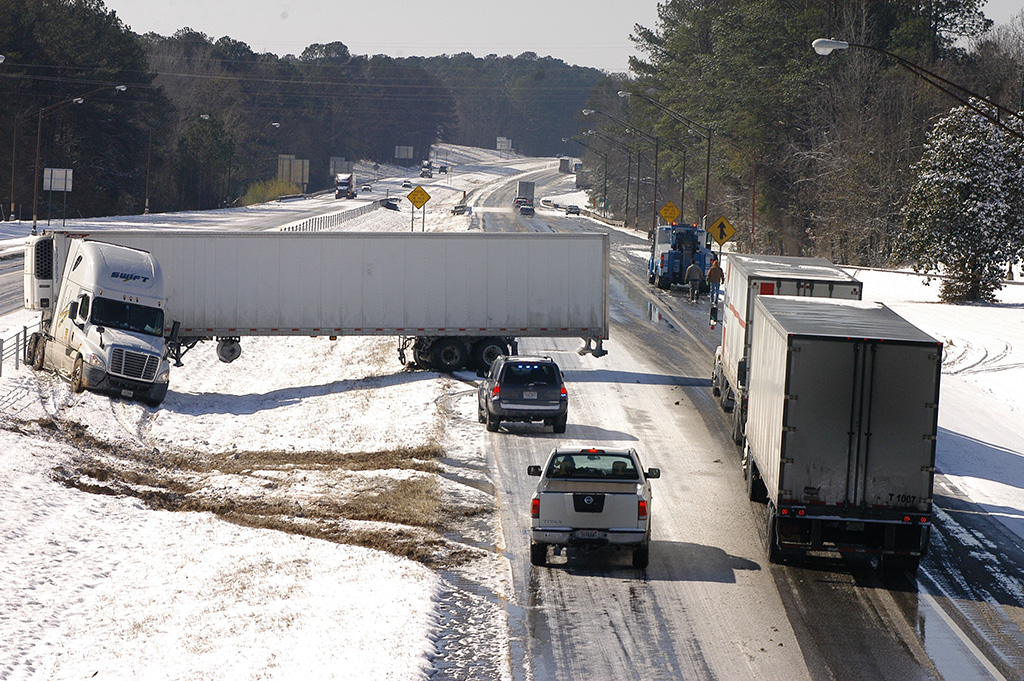 A ROUGH DAY ON I-85 — The snowfall early Wednesday morning created some hazardous driving conditions on Interstate 85 in the local area. Numerous spinouts took place in both lanes with vehicles winding up in the median or on the side of the road. Above, a south-bound tractor trailer jackknifed not far from the bridge over Highway 29, blocking the passing lane creating some traffic delays. At 3 p.m. EST, a wrecker came to pull the big rig out of the median. This action took up both lanes and had south-bound traffic tied up for some time. Some vehicles took a detour by taking the Exit 79 off ramp, crossing Highway 29 and getting back on the Interstate. With this portion of the Interstate being in the Lanett city limits and the north-bound lane being in the Valley city limits, both police departments had officers working numerous accident scenes. (Photo by Wayne Clark)

GREATER VALLEY AREA — The three local mayors, Steve Tramell of West Point, Kyle McCoy of Lanett and Leonard Riley of Valley, were highly complimentary of their street departments for their efforts in making the roads as passable as they could be early Wednesday morning. They are also appreciative that most local residents remained at home and did not get out on city streets during the early morning hours.

“The Street Department was out in the early morning hours putting sand on the bridges,” said Tramell. “They did great work under difficult circumstances.”

While they were out there working, the weather was frigid, with a brisk north wind accentuating the chill. Much more snow was falling than anticipated. The counties of Macon, Tallapoosa, Lee and Chambers in Alabama and Troup, Harris and Meriwether in Georgia each had more than three inches of snow. The counties bordering them got a little more than one inch.

Tramell said street department workers were out again in the late-night hours on Wednesday, checking for iced-over conditions on the city streets. West Point City Hall was closed until 1 p.m. today.

Tramell said he was surprised that the local area got as much snow as it did. He said he had to make a trip to LaGrange on Wednesday and found road conditions on  I-85 to be dangerous.

“It was not in good shape at all, and they had road graders out there in the afternoon,” he said.

McCoy said city workers were out in the elements at 2 a.m. Wednesday.

“Steve Crawley and his crew did excellent work in taking care of the roads. They put out sand in some locations and salt in others,” he said. “We’re fortunate that most people stayed home Wednesday morning. There weren’t many cars on the streets.”

That was not the case on the interstate. Lanett is responsible for a long stretch of I-85 from the Georgia state line to an area near Exit 70 at Cusseta. There were multiple accidents in this stretch of road, requiring police officers to attend them. Lanett officers working the shift logged long hours. The Valley Police Department had the same problem with the northbound lane.

The opening of Lanett City Hall was delayed until the noon hour.

“We also have a situation on N.  11th Ave.,” McCoy said. “A water main going to a Lanett Housing Authority area burst, leaving a lot of water in the street. Hopefully, that can be taken care of soon.”

Two sections of Highway 29 in Valley were closed until around 2 p.m. on Wednesday. These included the stretch of the four-lane from the hospital entrance, over a hill to the junction of Fob James Drive, across from the First Baptist Church of Valley, and the portion road at Johnson’s Curve that goes back toward Valley High.

“They were out last night around 1:30,” he said Wednesday. “The biggest problem we have on winter weather days is to keep the road leading to the hospital open. That road needs to be passable, especially at shift change time [at 7 a.m. and 7 p.m.].”

Riley said that both city hall and the Valley Community Center remained closed until noon on Thursday.