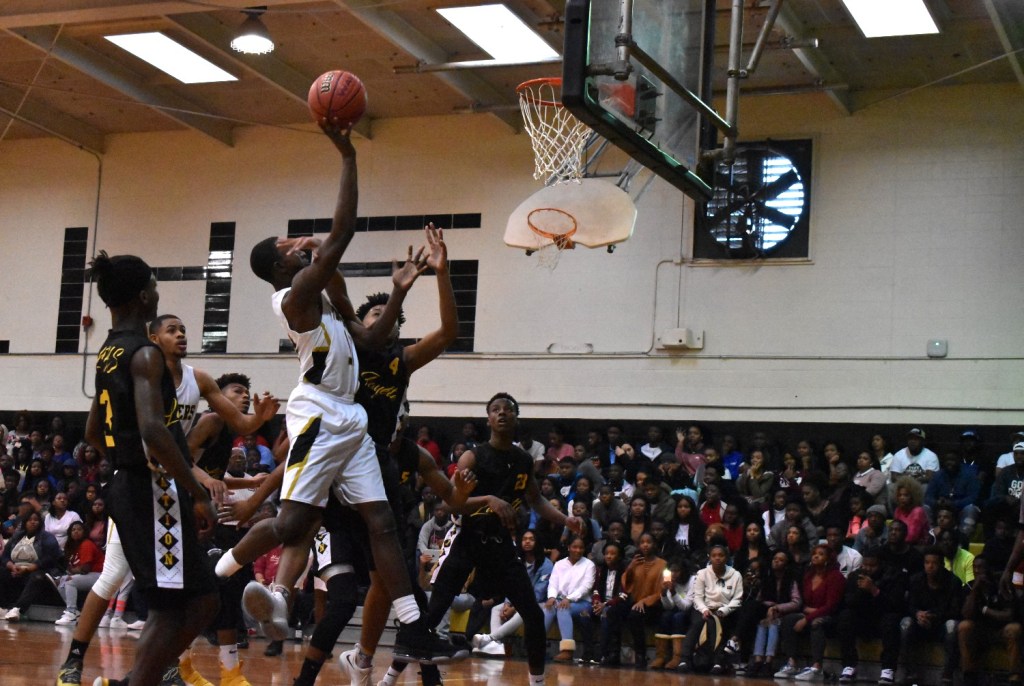 Lanett High School junior Trikweze Bridges attempts a contested shot in the first half of his team's 77-55 home victory over LaFayette on Saturday, Jan. 20. Bridges finished with 12 points. (Photo by Sam Chandler)

When he isn’t coaching the Lanett High School boys basketball team, he serves as a minister. Duty called on Saturday afternoon.

Carter officiated a funeral in Tuskegee that forced him to miss most of the first quarter in Lanett’s rivalry game against LaFayette. But he wasn’t worried.

When Carter walked into the Panthers gymnasium sporting a suit and tie, he found exactly what he expected.

“Our pressure defense is what’s hurting a lot of folks, especially when you can play 12 people,” Carter said, “and we were rotating 12 people into our game.”

The Panthers’ fast start set the tone for a 77-55 victory over their Class 2A, Area 8 foe. What was projected to be a tight battle between two of the top teams in 2A turned into a fourth-quarter runaway for fourth-ranked Lanett (11-5).

“I just feel like we’re only going to get better,” Carter said. “We haven’t reached our peak yet. We are not half as good as I think we’re going to be before this season is over.”

That’s hard to imagine given their performance on Saturday.

Lanett’s defensive pressure created a number of turnovers, and its collective size severely limited LaFayette’s ability to operate in the post. Senior forwards Emanuel Littles and Anquaevious Pollard, who combined for 35 points, established early ownership of the paint.

Lanett led 20-9 after one period, thanks to an 18-3 run to close the frame, and 39-28 at intermission. Panthers sophomore guard Jaquarius Houston banked in a 3-pointer from close to 40 feet as the halftime buzzer sounded to pad his team’s advantage.

Littles started the second half with a block, and senior guard Ty Truitt added a pair of transition layups. Lanett pushed ahead by as many as 17 points in the third quarter before LaFayette made a slight surge.

Bulldogs sophomore guard Matavais Burton, who posted a team-high 17 points, keyed an 11-2 run that bridged the third and fourth quarters. LaFayette trailed by eight, 54-46, with seven minutes to go.

That’s when Lanett took over.

Pollard sank a pair of free throws following a hard foul, and Bridges converted a three-point play. Bridges then all but sealed the outcome a few minutes later when his one-handed dunk extended the Panthers’ lead to 18, 64-46.

Bridges scored seven of his 11 points in the final frame.

“I like going to the goal, so I just went to the goal,” he said. “I was thinking about laying up, but my body just went up and dunked it in.”

Bridges, Littles and Pollard were accompanied in double figures by Truitt, who finished with 12 points. Markevious Moore had 15 for LaFayette.