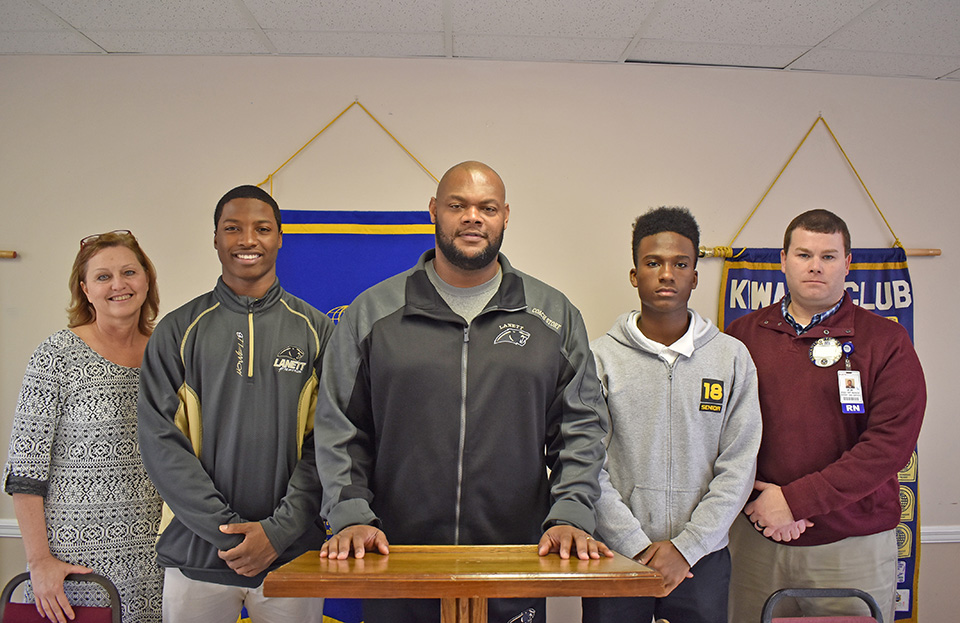 The coach and his players reminisced about the Class 2A Panthers’ dream 2017 season in which they went 15-0 and captured the first AHSAA state playoff title in school history.

Story took the podium first, followed by Howell and Ross.

The coach began his account by revisiting Lanett’s loss to Fyffe in the 2016 state semifinal, which he said served as motivation for this past season.

“I told them in the locker room after the game. I said, ‘Guys, one thing I want you to realize is that everything happens for a reason and a purpose,’” Story said. “‘If you don’t want this feeling again, you’ve got to put in the work.’”

After taking a few weeks to rest and recuperate in December 2016, the Panthers began preparing for the 2017 campaign. They hit the weight room, bolstered their endurance and strengthened their mental fortitude throughout the offseason.

Story interpreted his team’s victory over 3A Montevallo in the spring game as a sign that it was on track for a special year. But the Panthers didn’t rest on the win.

Instead, they buckled down. Players worked out four times a week in the sizzling summer heat.

“It’s painful, but we all fight and fight through it all so that we can build more stamina and courage for each other,” said Ross, who played at linebacker and wide receiver.

Lanett began to reap the fruits of its labor once the season started. The Panthers beat 5A Valley, 28-7, in the Aug. 25 opener. The victory initiated a torrid regular-season run that saw Lanett throttle opponents by an average margin of 28 points.

“I think our focus was one of the main parts of our campaign this year,” Ross said. “It wasn’t a whole bunch of playing around before games. Everybody was listening to their music, focusing and keying in on the game. I think that really helped us during the season.”

The Panthers’ dominance continued in the early rounds of the playoffs, as they won their first three games handily. Lanett’s 48-7 win over Lamar County in the third round secured its spot in the state semifinal.

Before his team hosted Sulligent on Dec. 1, Story sought a way to motivate his players. He decided to sear an old wound. Prior to kickoff, he took the runner-up plaque he had been handed after the 2016 loss to Fyffe and threw it to the locker room floor.

It cracked down the middle.

“When I slammed that plaque, I looked around at the guys’ eyes and it was tears,” Story said. “I knew then…they understood what was at stake and what they had to go out there and do.”

After falling short in the semifinal round eight previous times, Lanett trounced Sulligent, 59-28. The victory punched the Panthers’ ticket to the Dec. 8 state final at Bryant-Denny Stadium in Tuscaloosa.

Story said he knew his was team going to win. His players had come too far and worked too hard to settle for any other outcome. But the weather tested his faith.

Story awoke to snow on the morning of the state final, and he feared the wet conditions would hamper his passing game. He found little assurance during pregame warmups. His players voiced their discontent with the frigid weather, which numbed their hands, feet and faces.

They started the game as if they were frozen. Lanett’s opponent, Leroy, jumped out to a 15-0 first-quarter lead. It didn’t faze Howell, who played at linebacker and running back.

“Even when we were down 15-0, I knew we weren’t going to lose because how hard he worked,” he said.

The tide turned in the second quarter. Down by two scores, the Panthers converted a critical fourth-and-12 near midfield that led to a Terrion Truitt touchdown. Howell rushed for another score before the half to tie it, 15-15.

Lanett emerged from the intermission with renewed belief.  The Panthers proceeded to close out the game in decisive fashion, 33-15.

“It was unbelievable, the emotions and the feelings that you have to be able to win a state championship,” Story said. “This community has longed for it for so long.”

Story concluded his Wednesday account by thanking Lanett and its neighboring towns for the overwhelming support he and his players received throughout the season. It was one that won’t be forgotten anytime soon.

“As a kid, you dream of going undefeated and winning a state championship,” Howell said. “Everybody doesn’t get that.”