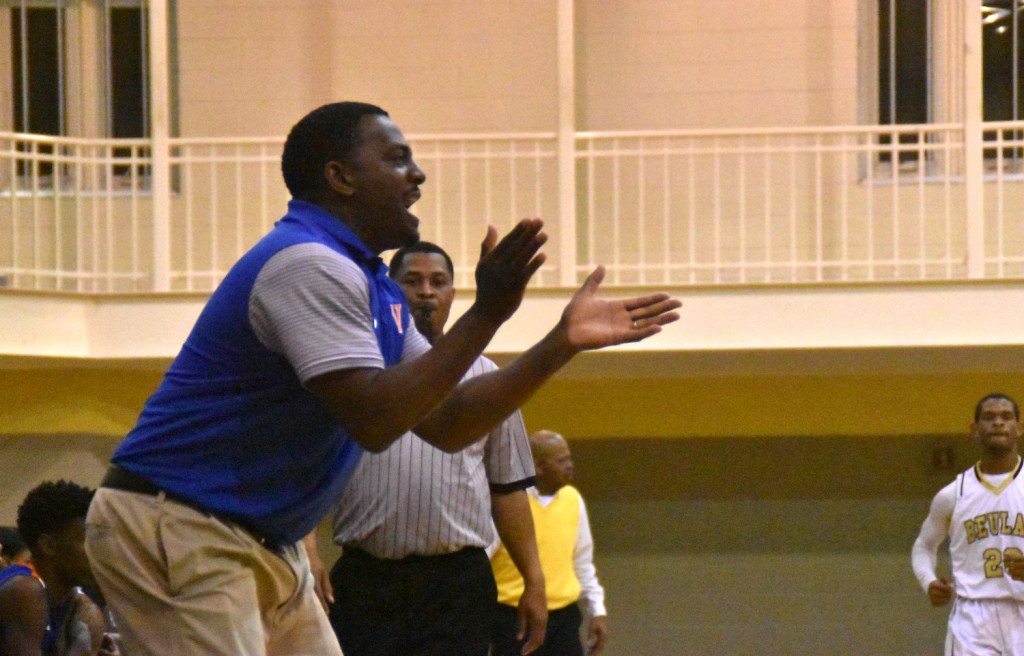 Valley High School head boys basketball coach Marshon Harper encourages his players in the second half of the Rams' 75-42 victory on Friday at Beulah. (Photo by Sam Chandler)

BEULAH — Kintavious Dozier dribbled through traffic before lofting a floater over the outstretched arms of his defender.

The shot deflected off the glass, fell through the hoop and sent Dozier to the free throw line.

He drained the attempt.

Dozier’s three-point play in the waning seconds of the second quarter gave the Valley High School boys basketball team a 15-point halftime lead on Friday at Beulah. The margin only grew as the game wore on.

Spurred by strong defense and sharp shooting, the Rams (11-9) stormed past the Bobcats, 75-42, in their first game action since Monday. Valley did not play Tuesday at Russell County after a pregame fight involving one of its players led officials to call off the contest.

The Alabama High School Athletic Association instituted a temporary suspension from competition on both programs while an investigation into the incident was conducted. The suspension was lifted on Thursday.

“We weren’t playing a day ago. We didn’t know if we were going to get a chance to play again,”  Harper said. “The Good Lord blessed us, we can play, so I told them, ‘Let’s play the game we love the right way.’”

His players took the message to heart.

Valley led 16-13 after one quarter before taking full control in the second. Dozier, a freshman, poured in 11 of his team-high 14 points in the frame. His final bucket — the three-point play —provided the Rams with a 36-21 cushion entering the locker room.

But the edge was as much a product of tight defense as it was of fluid offense. Valley took ownership of the interior and limited Beulah’s (7-7) production in the paint.

“Defensively, they kind of closed that rim off,” Bobcats head coach Curtis Noble said, “and we didn’t shoot the ball well outside.”

Quez Trammell connected from long range twice at the beginning of the third quarter as the Rams started to stretch their lead. Beulah trailed by more than 20, 56-35, heading into the final frame.

Valley continued to play well defensively and created turnovers that led to layups in transition. Beulah, playing its fourth game in five days, ran out of steam.

“We stepped the defense up tonight, and that was a big part of it,” Harper said. “I told them, ‘Let’s play good defense so we can get steals, get easy baskets.’”

Valley will return to action on Saturday for its Class 5A, Area 5 finale at Booker T. Washington in Tuskegee. Beulah will travel to Central Coosa for its final area game on Monday.

Ana Magby and Kenjadae Dunn combined for 36 points as the Valley girls  (7-8)  rolled past Beulah, 50-30, on Friday. The Lady Rams blew a tight game wide open in the third quarter after starting the frame on a 12-2 run.

Their decisive push began on the other end of the floor.

“We did a good job on defense tonight, creating turnovers and capitalizing on the opportunities,” Valley head coach George Grimes said. “We could have had more, but we’ll take what we get.”

Magby recorded a game-high 19 points, and Dunn had 17. Arteria Florence joined them in double figures with 12 points. Kensley Taylor paced the Lady Bobcats (6-9) with eight points.