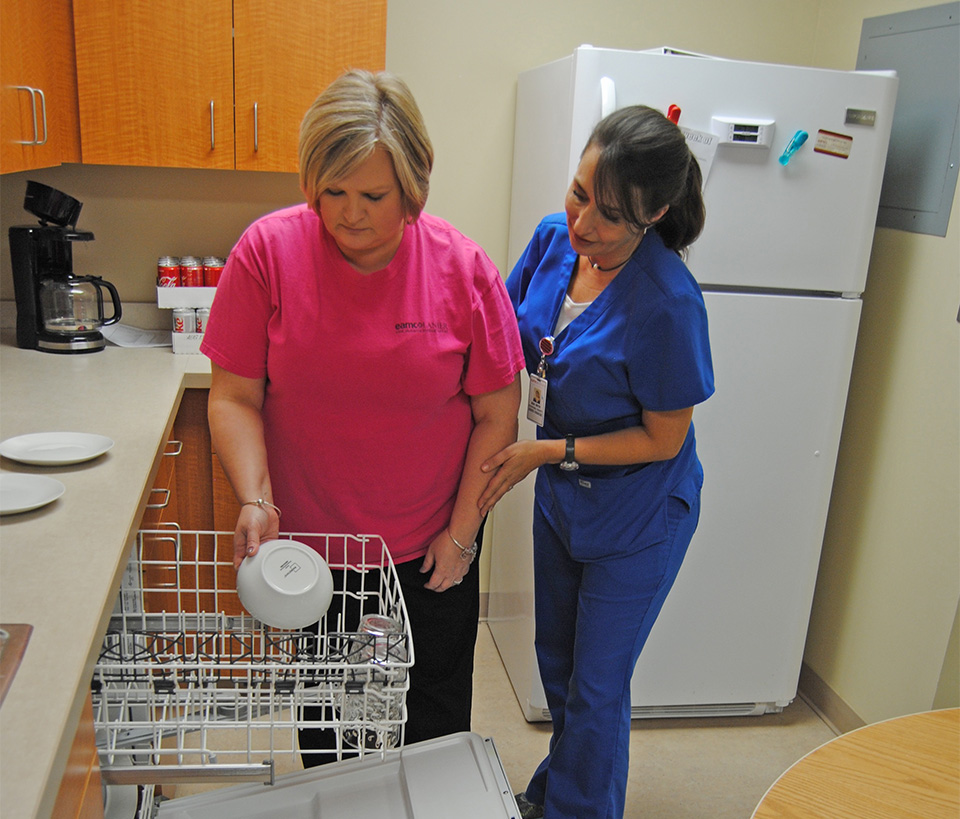 RELEARNING BASIC CHORES — EAMC-Lanier Hospital’s acute rehabilitation unit has a gym area where patients recovering from an injury or a medical condition can relearn everyday household chores, such as dressing, grooming, taking a shower, doing the laundry and so on. Occupational therapist Keri Smith (right) and Registration Supervisor Trinity Harrington demonstrate how a patient can be assisted in taking dishes out of a dishwasher and placed in a cabinet. (Photo by Wayne Clark)

VALLEY — Two new units at EAMC-Lanier Hospital, an acute rehabilitation unit and a detox unit, expanded their services for the local community in calendar year 2017 and are looking for even better service in 2018.

Cindy Daniel is the nursing manager for both units.

The detox unit has 10 beds and is at capacity most of the time. It’s for individuals with substance abuse problems who are attempting to clean themselves up.

The acute rehabilitation unit, called ARU for short, began as a 10-bed unit on Oct. 1, 2016. It has since expanded to a 17-bed unit. At the outset, there were four or five therapists on hand each day. That number has doubled since then. The group includes three physical therapists, two occupational therapists and a speech therapist.

Most of the patients they work with are elderly people who have experienced a stroke, broken hip or other condition that keeps them from doing everyday activities in the home.

People of all ages have been helped in EAMC-Lanier’s acute rehabilitation unit. To come there, the individual must be at least 18 years of age. It’s not unusual for the staff to work with someone in their 20s who is recovering from an automobile accident or other traumatic event.

What sets EAMC-Lanier’s ARU apart from other similar facilities is that all the rooms are private. In that safe, comfortable environment, therapists work with those who need assistance in regaining functional mobility, activities of daily living, speech, swallowing and cognition. A big advantage is that it’s in a hospital setting. Many acute rehab units aren’t. At the EAMC-Lanier ARU, patents can rest assured that there’s a cardiologist and an emergency room doctor just a few doors away 24 hours a day, seven days a week. Other such services as radiology and surgery are a short distance away as well.

The need for these acute rehab services are such that people in need of help are referred to EAMC-Lanier from a broad area that includes most of the state of Alabama and a large portion of Georgia.

“Things most people take for granted, such as washing clothes, working in the kitchen, dressing themselves and going to the bathroom, can seem like impossible tasks for those who have had some kind of injury,” said Tawanda Dixon, a speech pathologist and clinical liaison for the ARU. “We work with them in the effort to regain the ability to do this.

Those who are treated in the acute rehabilitation unit have been referred there by a doctor. Patients can be admitted directly from a hospital, a nursing facility or their home, providing if all the criteria for admission have been met. The ARU accepts most major medical insurance plans, including Medicare. Benefits and pre-authorization will be obtained prior to admission.

There’s an interdisciplinary team approach to maximize recovery, utilizing at least two disciplines such as physical, occupational or speech therapy. There are some intense sessions to help restore the individual’s normal functioning. There’s a minimum of three hours per day, five days a week or 15 hours over seven days.

Patients are encouraged to eat meals as a group to help overcome the isolation that often accompanies a disabling illness or condition.

People in the ARU work out in a gym area that’s nothing like what you’ll find at Valley Community Center. Instead of a basketball court, weight room and treadmills, there’s a kitchen area, a laundry and a bathroom with a shower. This is where recovering patients relearn daily tasks. Therapists help patients with such tasks as putting groceries in a refrigerator, removing dishes from a dishwasher and putting them in a cabinet, getting into and out of a shower and other daily activities.

“We need to know their home environment and their daily activities,” says occupational therapist Keri Smith. “We help them relearn getting from point A to point B. We do lots of problem solving with them. We want to make sure that they will be able to do what they normally do when they get back home. We want them to improve their strength, balance and fine motor skills.

“We help them with basic things such as feeding themselves, dressing, grooming. We look for any impairments they may have that keeps them from doing it.”

Dr. Frederick Aziz is the ARU’s medical director, and Rebecca Sweezey is the program director.

“We have exceeded the expectations we had for our acute rehabilitation unit when we first started it in October 2016,” said Cindy Brooks, EAMC-Lanier’s marketing and public relations director. “We knew it was something needed in the local area. We’ve had some bumps along the way, but it has grown. It’s also been a good revenue stream for us.”

Patients have come to EAMC-Lanier’s ARU from as far away as Mississippi. Some have come from Dothan, Birmingham, Alexander City, Dadeville, Grady Hospital in Atlanta and Baptist South in Montgomery, just to mention a few locations.

“Our goals for 2018,” said Dixon, “are to continue to have a visible presence in the community and for people to know the kinds of services we offer here.”