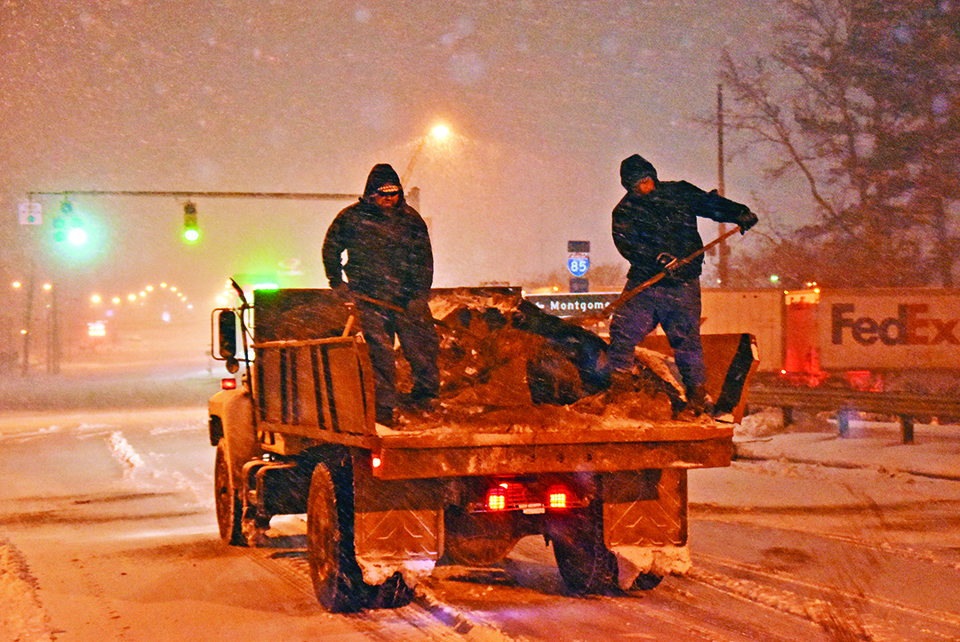 A City of Valley road crew shovels sand onto the I-85 overpass to help prevent accidents. (Photo by Steven Thomas)

Winter Storm Inga officially struck the area late Tuesday as temperatures dropped and snow began to fall, continuing to do so until around 6:30 Wednesday morning.

According to the National Weather Service, the Greater Valley Area is under a hard freeze warning until 9 a.m. Jan. 18. Snowfall has been between one-half to near 2 inches across the state.

Despite a prediction of sunny weather Wednesday, temperatures are expected to hover around 30 degrees all day before getting into the teens Wednesday night.

At 5 a.m., road crews with the City of Valley were out unloading shovel loads of sand in an effort to prevent accidents.

Josh Harvill, Chambers County Engineer, sent a message just after midnight that all county roads and bridges within Chambers should be considered impassable and travel should be suspended or delayed if possible.

The Alabama Department of Transportation sent an advisory warning of icy road conditions, noting high pavement temperatures from warm weather through Monday may cause snow or wintry mix to melt and immediately begin turning to ice or slush, making driving conditions difficult and potentially hazardous.

“ALDOT, emergency management and law enforcement officials are united in urging people to avoid travel after snow or wintry mix begins falling, and until conditions improve,” the statement reads. “Appropriate driving speeds are determined by the road conditions, which on wet or icy roads should be slower than the posted speed limit. Motorists should slow down and move over if possible when approaching ALDOT and other highway maintenance personnel and emergency vehicles at work.”

The weather has also shut down much of the area. Local schools have closed and several sporting events and community meeting were cancelled due to inclement weather.

The nearby City of LaGrange announced early Wednesday morning they would be closed for the day for all non-essential services.