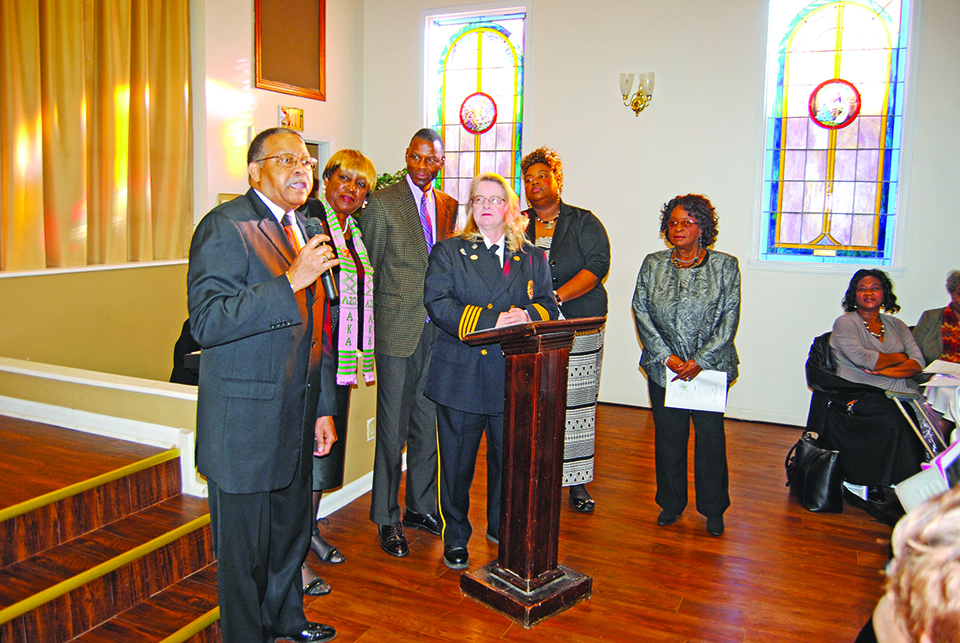 WEST POINT — If he was still living, Dr. Martin Luther King Jr. would have celebrated his 89th birthday on Monday. He only made it to year 39, having been killed by an assassin in Memphis, Tenn., in 1968.

The 50th anniversary of that tragic day will take place on April 4 this year.

In welcoming everyone to the event, Bessie Jackson asked everyone to keep in mind that the MLK holiday “should be a day on and not a day off,” making the case that the work started by Dr. King and others in the Civil Rights movement needs to continued.

This year’s theme was “Be the PEACE you wish to be in the world,” and special guests included veterans and active duty personnel from the four major branches of service: the U.S. Army, U.S. Navy, the Air Force and the Marines. The guest speaker of the day, Col. Herbert R. Willingham of Arlington, Va., came at his own expense to speak. He and his wife, Sonji Willingham, have local ties.

Emily Thomas Williams, local chapter president of the AKA, thanked them for doing that.

“They came at their own expense to be with us today,” she said. “We didn’t know what kind of weather we’d have when they agreed to come. They paid for the flight, the lodging and their meals. We are so thankful to have them. We are a working chapter. Our 27 members do the work some of the chapters with 400 members do.”

Col. Willingham grew up in the Atlanta area and can remember coming to West Point to visit relatives. “The only way to get there at the time was Highway 29, a two-lane road with speed limits. It seems like it took forever to get here, and you had to watch for the state patrol,” he said to some laughter. Later on in the 1970s, when parts of I-85 opened, the Coca-Cola plant became a welcoming landmark. “You knew you were in West Point when you saw it,” he said.

“I wonder what she would think of me today,” he said, becoming emotional.

“She couldn’t imagine me attending, much less graduating from Auburn University,” he said after a long pause.

Like most Deep South universities, Auburn was segregated until the mid 1960s.

Willingham, who works at the Pentagon, said he was able to attend a major university like Auburn because of the work of Dr. King and other leaders in the Civil Rights movement.

“I am so grateful for the opportunities that have been provided to me,” he said. “They helped me have a 28-year career in the military.”

Willingham has read a great deal about Dr. King over the years, and his admiration of the man grows with the more he reads. He particularly liked the service theme of Monday’s program.

“Choosing to serve is the essence of greatness,” he said. “Each one of us can make a difference. We can make a better person of ourselves and a better world to live in. Nearly 50 years after his death, Dr. King’s example still guides us.”

The word peace can be seen as an acronym, Willingham said.

“P is for people, but could also stand for purpose and passion,” he said. “E is for education. You have to have it to get anywhere in life. The A is for appreciation. We should be thankful for what we have. C is for choice. What we choose to do can lead to a better life. E is for effort. Accomplishing anything requires effort.”

Willingham said that there are events going on in the world today that most of us don’t like and no one knows what tomorrow may bring.

“This is no time for us to put our heads down and say ‘Woe is me.’ The challenge is for each one of us to do our part. Dr. King said that the time is always right to do good things. By doing good things we honor his legacy. I challenge you to support Alpha Kappa Alpha and the good work it has been doing.”

When he was being introduced by Emily Williams, the colonel smiled when she talked about his meeting a girl on a blind date while he was in college. “He was looking for a meal but wound up with a wife,” she said.

He later retorted that he got the meal first and the wife came later. He credited the wife for being the wings that have lifted him into the good life they both have known.

“Thank you for coming out and being with us on what would have been Dr. King’s 89th birthday,” he said. “I am a beneficiary of the work done by Dr. King and others of the Civil Rights movement. He accomplished so much in 39 years. His speeches, his marches, his ‘Free at Last’ speech, the Letter from the Birmingham Jail and so much else he did.”

Willingham expressed gratitude to the U.S. military for allowing him to attend Dr. King-related events every year.

“I have been able to attend a Martin Luther King holiday event at every duty station where I have served,” he said.

He encourages everyone, especially the young, to read a lot about Dr. King and his work.

“He was a man of great intelligence, a minister and a man who led an uncommon life of service. “He was devoted to selfless service and to open the door of opportunity for people to have better lives. His wife (the late Coretta Scott King) once said that all he ever wanted to be was a minister at a Baptist church with a large urban congregation. He went on to something much bigger than himself. He wanted to see basic civil rights, basic human rights, something we take for granted today.

“He wanted to be remembered for service,” the colonel added. “He often asked the question, ‘What are you doing for others?’ If more people did that it would help improve our communities.”

Dr. King was still a young man in 1968, the year of his death, but it’s almost as if he knew the end was coming. There’s a sense of it in the famed “Mountaintop” speech and his talk about death and the kind of funeral he wanted.

“He didn’t want be known for the Nobel Peace Prize or many other awards he’d won,” said Col. Willingham. “He didn’t want to be known for where he went to school or for the places he’d been invited to speak. He wanted to be known for loving other people and for wanting to serve in ways that made life better for others. His great legacy is that he created opportunities for people who had never had them before.”

The AKA chapter received proclamations from city councils in West Point, Lanett, Valley and LaFayette.

There was lots of singing in the morning program. The big crowd on hand sang such favorites as “Lift Every Voice and Sing,” written by James Weldon Johnson over 100 years ago and “We Shall Overcome,” the anthem of the Civil Rights movement of the 1960s.

Two soloists nearly blew the roof of the building with standing ovations after some extraordinary efforts. Ka Lisa Lynch sang “The Greatest Love,” popularized by George Benson and Whitney Houston. When Mrs. Holloway finished a very powerful version of Dr. King’s favorite song, “Take My Hand, Precious Lord,” emcee Cherroyle Webb said, “If that doesn’t touch your soul you must be dead.”

Three students were presented awards on having won first, second and third-place awards in an annual essay contest. First-place winner Jamison Harper talked about learning an important lesson about seeing that man in the mirror looking back at you and being the best person you can be.

Second-place winner Trinity Holt wrote of Dr. King abolishing the chains of injustice through the light of Jesus Christ.

“I’m glad he provided me an opportunity to turn my vision into reality,” she said.

Third-place winner Calvin Williams Jr. wrote of being inspired by Dr. King to think it possible to one day have a world without war, violence and fear.

The program concluded with Emily Williams asking veterans and active-duty personnel to stand and be recognized, starting with the Army, and then going to the Navy, Marines and Air Force. She recognized some AKA Sorors who weren’t present.

“Harriet Ramsey-Bates is in Selma today,” she said.

“She gave us the idea of having a breakfast for the King holiday,” she said. “We are asking for prayers for Christine Simpson. She is recuperating at home today. She helped us get started in Lanett. Catherine Crook isn’t with us today. She’s 95 and one of our spiritual leaders.”

Mrs. Williams reached a milestone in her AKA service this past year. She’s been a member for 50 years. This makes her a Golden Soror, one of the great marks of AKA membership.