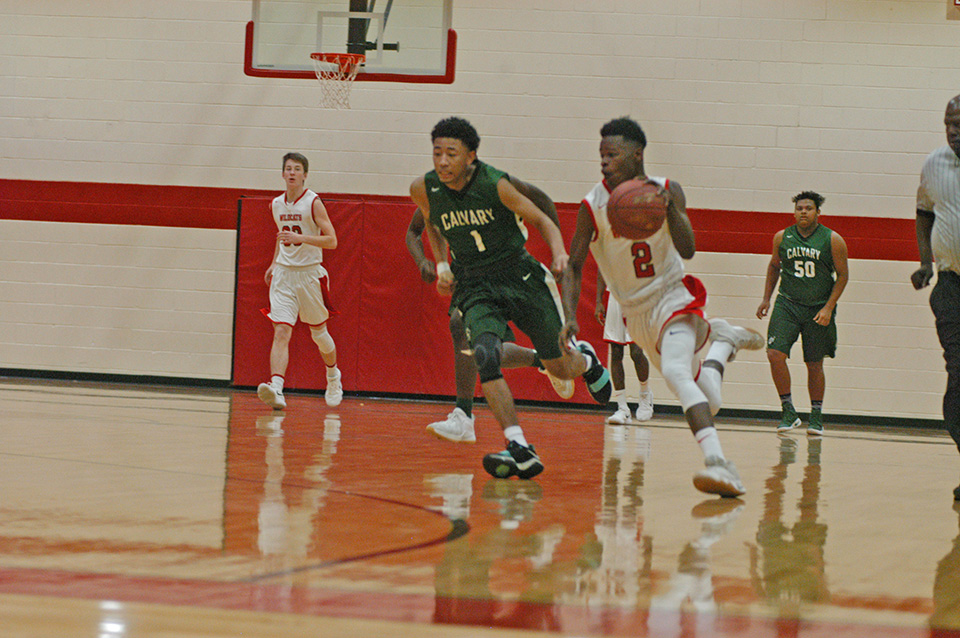 NO. 2 ON THE MOVE — Springwood’s Gus Davidson (2) races up court past Calvary Christian defenders to lead a Wildcat fast break in Saturday night basketball action at the Boswell Gym. Scoring frequently on both long jumpers and drives to the basket, Davidson led all scorers in the game with 21 points. In getting past the Knights by a score of 63-48, Springwood won their seventh game of the year. The Wildcats will be back in action Tuesday night with a road game versus Glenwood. Also playing well for the Wildcats on Saturday were Christian Lancaster, who had 14 points, Andre Roberts with 10 and Garrett Partridge with nine. (Photo by Wayne Clark)

LANETT — In Saturday basketball action, Springwood swept a pair of games against Calvary Christian of Columbus. The Lady Wildcats won their game by a score of 50-32 while the Springwood boys won 63-48.

In the afternoon game, the Calvary Christian Lady Knights faced a fired-up group of Lady Wildcats. The Lady Wildcats were disappointed Thursday night as they experienced their first home loss of the year against Lee Scott.

“We came to the Boswell Gymnasium ready to get back on the winning track,” said Coach Rick Johnson.

With that motivation, and strong defensive play on their home court, they captured an impressive win.

The Lady Wildcats and Lady Knights were both a little cold in the first quarter, resulting in many missed shots and several turnovers as the Lady Wildcats took a 6-4 lead. Then the Lady Wildcats started producing points from their offensive action, outscoring Calvary Christian 33-13 over the second and third quarters, providing a 39-17 margin heading into the final quarter. As Coach Rick Johnson substituted liberally throughout the final quarter, Calvary was able to narrow the final margin to 18. Springwood turned the ball over 18 times while forcing Calvary into 32 turnovers for the game.

“We started the game strong defensively and maintained our focus throughout, but we struggled offensively in the first quarter with our turnovers, shooting and rebounding,” Coach Johnson said “We discussed that and our team collectively started being more purposeful in their effort. The results are there. We just simply don’t have the talent to take off any possessions. And, when we play with a determination like that we may not win every game, but we know we’ll be in a much better position. Our seniors helped us with that today. Maya, Kari and Elizabeth all played solid ‘floor’ games. Rebounding, assisting on baskets, defensive steals and deflections were all because they were a more active tonight.”

With the win, the Lady Wildcats improved to 13-3 on the year. They move on to play at Glenwood in Phenix City in another region game on Tuesday. Glenwood is the defending AISA 3-A State champion and has a 14-5 record.

In the boys game, Springwood improved to 7-9 on the year with an impressive win over Calvary Christian. They led by more than 20 points in the second half and cruised to a 63-48 win.

M.J. Brundidge had 10 points for Calvary and Stuart Wells had nine.

Coach Drew Dorsey was pleased with the all around play of his team. “We had an intense focus on defense,” he said. “We blocked out well, had very active hands and rebounded the way we are supposed to. I really like the way our guys shared the ball on offense.”

Davidson took over the game at this point, scoring on both long jumpers and driving past defenders and scoring on layups.

The Wildcats built on that five-point lead to double-digit range in the second period and were up by fourteen, 33-19, at the half. They extended the lead to more than 20 points in the third quarter of play before Coach Dorsey started substituting liberally in the final period, allowing the visitors to narrow the score  toward the end of the game.

Springwood will take to the road on Tuesday to take on always tough Glenwood.