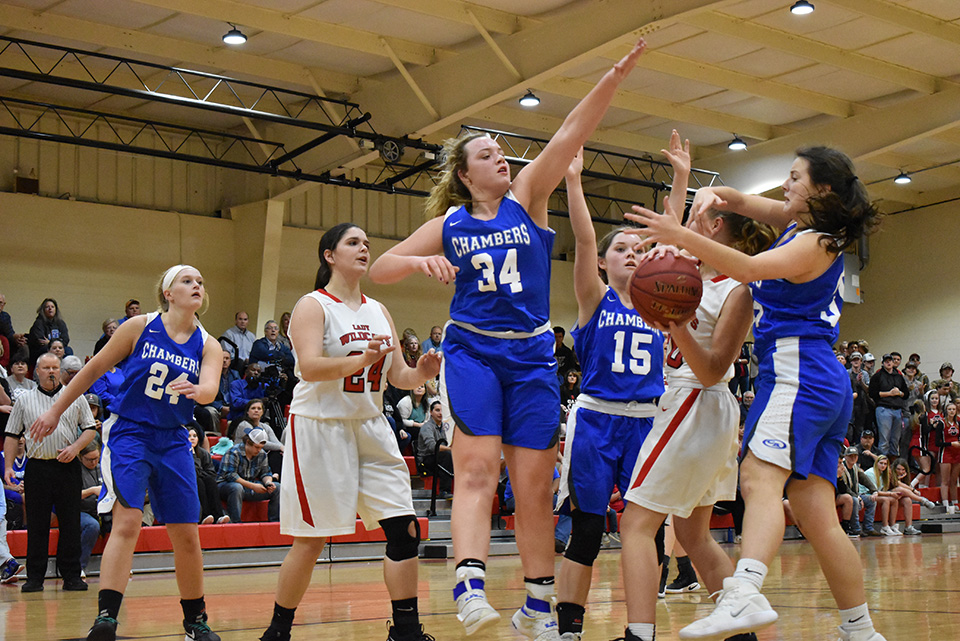 Chambers Academy freshman Britten Stephens (34) has provided the Lady Rebels with a post presence throughout the season. Her team will need her today against Southern Academy in the AISA Class A state quarterfinal.

LaFAYETTE —  The players took off at the sound of Brandi Fuller’s whistle.

Dressed primarily in blue and white, they sped from one sideline to the other before bolting back across the worn wooden floor. Paces varied, but no one stopped until the whistle’s shriek refilled the Chambers Academy gymnasium.

“I think some of these teams we play are more skilled than us,” said Fuller, the fourth-year girls basketball coach at Chambers, “but the heart and hustle are always there. You can’t coach that.”

Fuller is hoping that those unquantifiable qualities, which were on display at a recent practice, prevail today at the Montgomery Multiplex when the Lady Rebels (9-12) take on Southern Academy in the AISA Class A state quarterfinal.

“They’ve got to believe in themselves,” Fuller said of her team’s key to success.

The Lady Rebels did not advance to state last season after finishing third in the area and falling in the opening round of the region tournament. It was their first time not clinching a state berth since Fuller took over as coach in 2014.

But this season has been different.

Bolstered by the addition of sophomores Audra Slay, Lizzie Keebler and Shelly Keebler — along with standout freshman Britten Stephens — the team went 4-2 and won the regular season area title. The achievement secured its spot at state, even before the region tournament kicked off last week.

It’s a good thing it did.

Senior Tori Harmon credited the team’s tight bond as a reason for its overall improvement from last season.

“I think it’s our friendship with one another, our teamwork that we have with each other,” said Harmon, a returner along with junior Tate Reese. “We’ve worked really well together this year.”

The Lady Rebels have meshed even as they’ve taken their lumps. Fuller loaded her team’s 2017-18 schedule with a number of high-quality opponents, thus the 9-12 record.

“I don’t want to do that day in and day out, but I think it makes us a little bit better,” she said.

Her team’s mettle will be tested today against Southern. On the line will be a spot in the state final four, which the Chambers girls have yet to reach under Fuller.

Their trips to state in her first two seasons both ended in the elite eight. But this time could be different for a team driven by heart and guided by hustle.

“I think we have a shot,” Stevens said.