Theatre dedicated to late board member 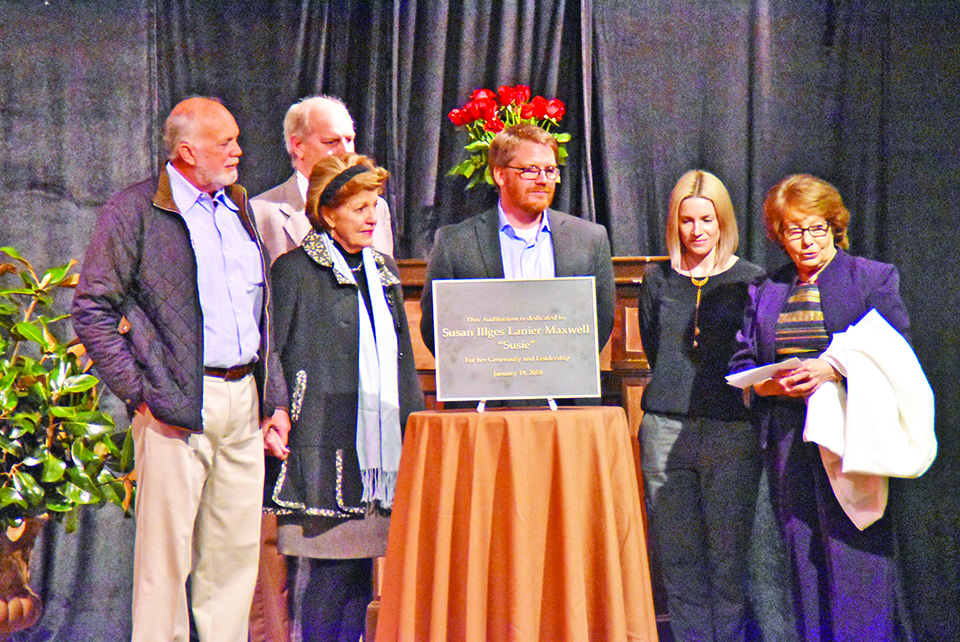 WEST POINT — Despite the somber mood, the New Horizon Theatre honored patron and board member Susie Illges Lanier Maxwell by dedicating the auditorium in her name Friday night.

Maxwell, who passed away nearly a year ago, was warmly remembered as a dedicated and generous patron, board member and participant in theatre events.

“Tonight, we are honored to dedicate our auditorium in memory of Susie,” said Elizabeth Rouquie, a member of the theatre board, adding that the group voted and approved the decision in April

A large group attended the event, with Rouquie noting several were members of Maxwell’s family.

Managing artistic director Bill Nixon was then brought out to share his memories of Maxwell.

“I guarantee Susie is up there right now chewing us all out for doing this,” he said, reminiscing that Maxwell didn’t like having a spotlight cast on her.

Nixon recalled his first meeting with Maxwell during a past production several decades ago, saying she gladly helped him out when he had to clean up after a show.

In the 1980s, he and Maxwell started working together more frequently. Many times, he tried to convince Maxwell to join the board.

“Every time the response was the same,” he said. “She didn’t know what she could contribute to our board or she didn’t think she was board material.

In 2012, Maxwell helped as campaign chairman to assist with getting the current auditorium. Nixon said that despite estimates being lower, Maxwell helped raise the money needed to acquire the building. Following this, she became a board member.

Nixon recalled how Maxwell would help out in several ways, not just on the board but as a volunteer worker as well.

She also helped raise funds for various projects, Nixon said, but would always brush it off as unimportant.

About a year ago, he recalled, Maxwell asked for the financial reports and information on a few loans.

“The next week we got a call about a stock transfer from Susie,” Nixon said. “He told me the amount. We sold the stock. Paid off both loans. Put the balance of about $20,000 toward improvements.”

With tears welling up, Nixon announced the theatre was debt free.

Solemnly, Nixon exited the stage to a round of applause.

Rouquie returned, thanking the board for helping put on the event.

She then asked for Nixon and the members of Maxwell’s family in attendance to join her on stage as she unveiled the new plaque that will grace the entrance of the theatre. It proclaimed the auditorium the Susan Illges Lanier Maxwell Auditorium.

With the event over, the crowd gathered in the theatre’s lobby for refreshments and recollections on New Horizon and the life of Maxwell.