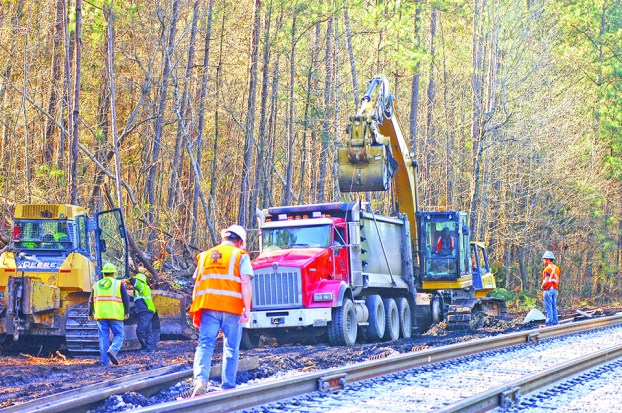 A BUSY HARDHAT AREA — For the past few days, there has been a busy hardhat area along the CSX rail line between LaGrange and Standing Rock. A contract work crew has been near Mile Post 831 about a mile from the Alabama state line and a couple of hundred yards from West Point Lake. They are gathering a large amount of coal that was spilled along the rail embankment in a derailment last week. (Photo by Wayne Clark)

EVANSVILLE, Ga. — For the past few days, there has been a large number of red Mack dump trucks traveling east and west along the portion of Highway 109 that runs between the Alabama state line and LaGrange.

For anyone wondering, “Why all those trucks?”, the answer is simple. They have been involved in cleaning up a derailment site on the CSX rail line between LaGrange and Standing Rock, Ala.

It has been a massive undertaking.

A CSX spokesperson said of the incident, “At approximately 11:30 p.m. Tuesday [Jan. 16], a CSX train derailed several railcars near the Thompson Road crossing just outside LaGrange, Ga. Preliminary reports indicate several railcars containing coal derailed. There are no injuries, no safety risk to the public and no waterways impacted.  The train was traveling from Madisonville, Ky., to Jacksonville, Fla. It consists of three locomotives and 110 freight cars.”

The first task for CSX was to get the damaged cars away from the track and to repair the rails.

This allowed rail traffic to continue on the busy line. Five damaged hopper cars are now lined up in a row between the lake and the cleanup site. According to a contract worker on the site, they are too badly damaged to be put back into service and will be cut up for scrap.

Gathering up the spilled coal has been a task in and of itself. The first chore was to build a temporary road to the derailment site. A road leading to a lakeside residence helped but a cutoff back to the railroad was needed. It had to be sturdy enough to support those big trucks and some heavy yellow equipment that used it.

The temporary road went for some distance along the embankment near the tracks. It took a good bit of work just to get to the big heaps of coal along the rail embankment.

Some huge bulldozers came in handy. They pushed the coal into an enormous pile, which has decreased rapidly thanks to the cleanup efforts. To collect the coal,  the Mack dump trucks back into the work zone and line up single file. A diesel-powered excavator with a long boom and a huge bucket dips into the pile and loads coal onto the back of a waiting truck. An operator sits in a rotating cab and moves load after load onto the waiting truck. When the bay is filled, it moves out and the next truck backs in.

It’s an efficient process, which ensures that the site should be cleaned up in a relatively short amount of time.

“Normal train service has resumed at the site where a CSX train derailed seven cars last Tuesday morning just outside LaGrange, Ga.  Crews safely moved all derailed cars from the tracks and completed track repairs Thursday,” the CSX spokesperson said. “Some personnel will continue working near the site to scrap and remove the rail cars involved in the derailment.  This incident remains under investigation.”

Most of the coal trains coming through LaGrange originate in the Powder River Basin area of Wyoming, the largest coal-mining area in the United States.

The coal trains that travel through LaGrange are en route  to coal-fired plants in Florida to help supply electricity for a state with more than 20 million people.

These trains carry heavy loads and are usually pulled by four or five engines. It’s not unusual to have an additional engine pushing it from the back. The empty hopper trains that go back to Wyoming for more coal are much lighter.

LANETT — The Lanett High School girls basketball team shuffled out of the gates in its Jan. 5 meeting with... read more