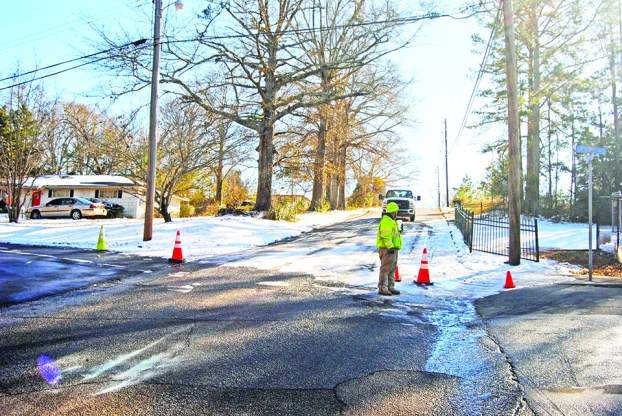 For the 48-hour period that included most of Wednesday and Thursday, the Chambers County 911/EMA Center received a total of 691 calls. Of this figure, 92 involved motor vehicle accidents. Another 66 were from people who had skidded off the road and needed assistance.

Much of the snow had melted as of Thursday evening, but with nighttime temperatures dipping into the 20s,  the remaining accumulation refroze. That created dangerous driving conditions Thursday night and Friday morning.

“We still have roads with sheets of ice and icy patches,” said 911/EMA Deputy Director Kathy Hornsby on Thursday. “People need to slow down and be careful. Pay attention to black ice that’s on the roads.”

The Alabama Department of Transportation closed Highway 50 on Thursday. It  couldn’t bring a brine truck in to melt the ice quickly, so it took more time for a work crew to remove it.

Chambers County Schools Superintendent Kelli Hodge said Thursday that the dangers posed by ice on the roads had not cleared up enough to reopen the schools.

“We want our students to remain safe,” she said. “We will resume our normal schedule on Monday.”

Valley Mayor Leonard Riley said on Thursday that the roads in his city were in pretty good shape overall. He said that one street near the Langdale Cemetery was still closed on Thursday and that traffic was being detoured around it.

“Our Public Works Department has done some great work  for us,” he said.

Steep hills on Cherry Drive and North 11th Avenue in Lanett were still a problem Thursday, causing some road closures. Orange cones were put in place to block off the approach to Jackson Heights and on “Thrill Hill.”

The snow and ice should clear by Monday. The Weather Channel’s 10-day forecast for the Greater Valley Area calls for high temperatures in the 60s on Saturday and Sunday,  with lows above the freezing mark. There is a 90 percent chance of rain on Monday.

Lanett school board names area teachers of the year

LANETT — At its first meeting of calendar year 2018, the Lanett Board of Education on Thursday honored two teachers... read more