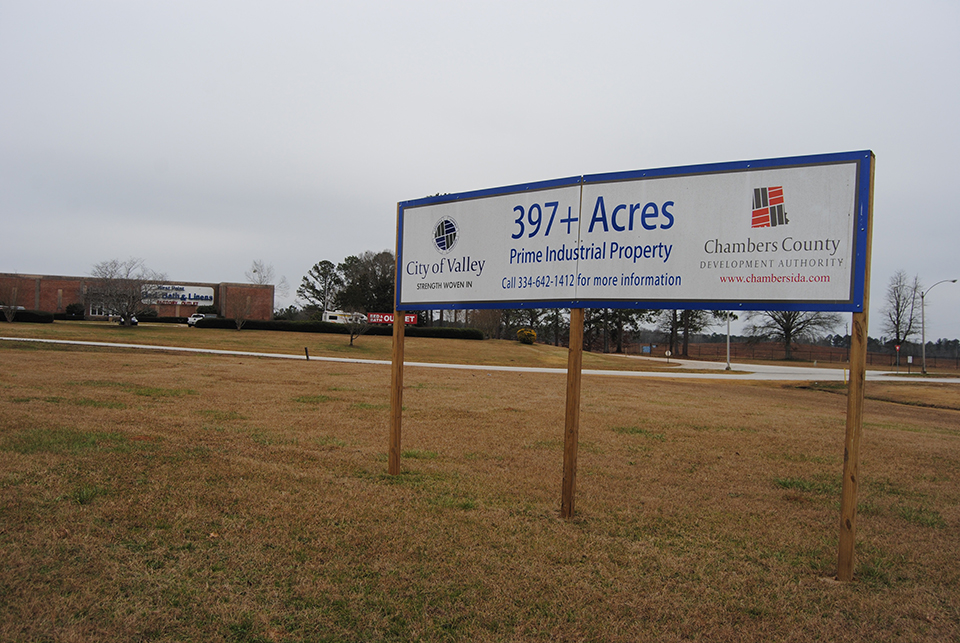 INDUSTRIAL PARK — The above sign off Fob James Drive marks the entrance to the Valley Industrial Park. Approximately 400 acres was initially available . That has since been expanded to around 800 acres. (Photo by Wayne Clark)

EDITOR’S NOTE: This is the second in a four-part series looking ahead to the new year through the eyes of area mayors.

VALLEY — The announcement of a major employer coming to the area and the acquisition of land for an industrial park were the highlight events for the City of Valley in 2017. Just before Christmas it was announced that John Soules Food of Tyler, Texas, had purchased the former WestPoint Stevens distribution center off Towel Avenue and would be locating a processing plant there. The plant will be cutting and packaging beef and chicken products and could open by the third quarter of 2019. The company will be investing an estimated $70 million in the building prior to start up and around $110 million over the next five to six years. The plant is expected to have around 210 employees in its first year of operation and up to 500 or so when three lines are in operation over the next five or six years.

“It’s a big, big thing for our local area to have John Soules Foods coming here,” said Mayor Leonard Riley. “They should be in production by late 2019, and it will mean 210 jobs in the local area that are not there now. Once they get their production going right they will expand to have more lines in production.”

A pending land purchase in calendar year 2017 could also expand the city’s industrial park to around 800 acres. Before that sale becomes final, some due diligence needs to be done. It was thought that there might be archaeological sites on the land that could potentially affect development. A private company was contracted to look for that and thus far, most of the land has cleared inspection. There is a 25-acre site near the historic Combs home that has yet to be examined. It’s possible there could be some unmarked graves on the site. The presence of such graves could affect a portion of the sale from going through, but would not affect the vast majority of the land.

Mayor Riley said the land the city owns near the Interstate has to be one of the best sites available along I-85 between Montgomery and Atlanta. “You just don’t see land like this available along the I-85 corridor,” he said.

It’s already drawing serious interest from major industries. The Valley site came in second for two major projects. Lidl, a German grocer that’s expanding into the U.S. gave the site a serious look before deciding to go to Cartersville, Ga., located in the metro Atlanta area. They plan to build a distribution center that’s over one million square feet in size. An auto supplier also looked at the site before deciding to go to Huntsville.

“We need to be patient with this and to be careful about who we select,” Mayor Riley said.

The main criterion is to have a company that will bring good-paying jobs.

What people make is the key factor in determining per capita income. This is something commercial developers look at before deciding to invest in local communities.

The city’s Public Works Department is continuing to clear the land the city previously purchased from WestPoint Home entities and will move on to the Combs purchase once that sale is final. “We purchased a big trackhoe and a large bulldozer to do this,” the mayor said. “They’ve done a good job with it, and we have saved a lot of money doing it ourselves. We are clearing everything but the wetland areas.”

Mayor Riley said the city is in the best financial shape it has been in a long time. This allowed the city to purchase new vehicles for all departments and to have a road paving program. “We have pretty much gotten our fleet up to date,” he says of those purchases. “It’s also helped us to have had some major construction paid out of cash flow.”

The first of those projects involved a major upgrade at Valley Sportsplex. This cost around $2.4 million and extended over two fiscal years. The improvements have allowed Valley Parks and Recreation to be more competitive in bringing youth baseball and softball tournaments here. That, in turn, creates more local tax revenue via out-of-town visitors staying in local hotels, dining in local restaurants and making other local purchases.

The city plans to pave approximately nine miles of roads in 2018. The biggest stretch will be the portion of River Road that runs from Trammell block to McGinty’s Crossing and then along California Road to School Street in River View.

The East Alabama Water, Sewer and Fire Protection Authority has been doing some work in the area. Once that’s finished, the road paving can begin. “Weather permitting, they should be through in a few weeks,” Mayor Riley said.

The mayor said he wanted to apologize to the public for having the boat landings in Shawmut and Langdale closed for longer periods of time than was anticipated. “We know it’s an inconvenience for those who use the boat ramps a lot, but we want to make sure it’s done right.”

The city has gotten some assistance from the Chambers County Highway Department on this. It should be worth the wait when all the work is done. The access roads will be paved, and there will be more parking space at the landings.

The City of Valley currently has 72 full-time and 26 part-time employees. Those numbers go up during the warm weather months when more people are needed for the recreation programs and for grass cutting.

“We recently purchased some new police cars, a limb truck and some pick-up trucks for our departments,” the mayor said. “We will be needing a new street sweeper in a couple of years, and we’ll have to purchase some new equipment for the Community Center.”

Some HVAC units have been replaced. A large piece of equipment known as a pool pack is getting in bad shape. It purpose is to help keep the pool water warm and to take our some of the chlorine. One of its two compressors has gone out. The pool pack is a very large item and sits on top of the Community Center. Replacing it will cost around $256,000.

“The sale of Langdale Mill was huge for us,” Mayor Riley said. “We are now relieved of the operational cost that was involved in keeping it.”

When the cost of insurance, the power bill, fire protection and having running water going to the site are figured in, it cost the city around $60,000 a year to keep the mill.

“We are in as good condition financially as we have ever been as a city,” the mayor added. “I want to thank the department heads for the good work they have been doing. They plan their budgets and stay on top of them, and we try to meet their needs the best we can. We want them to have good equipment to work with.”

“I’m pleased where we are financially,” said Riley. “We have come a long way in the five years I’ve been mayor. We’re in better shape now than I could have ever dreamed five years ago. We have a great group of employees, and they have a lot to do with that.”