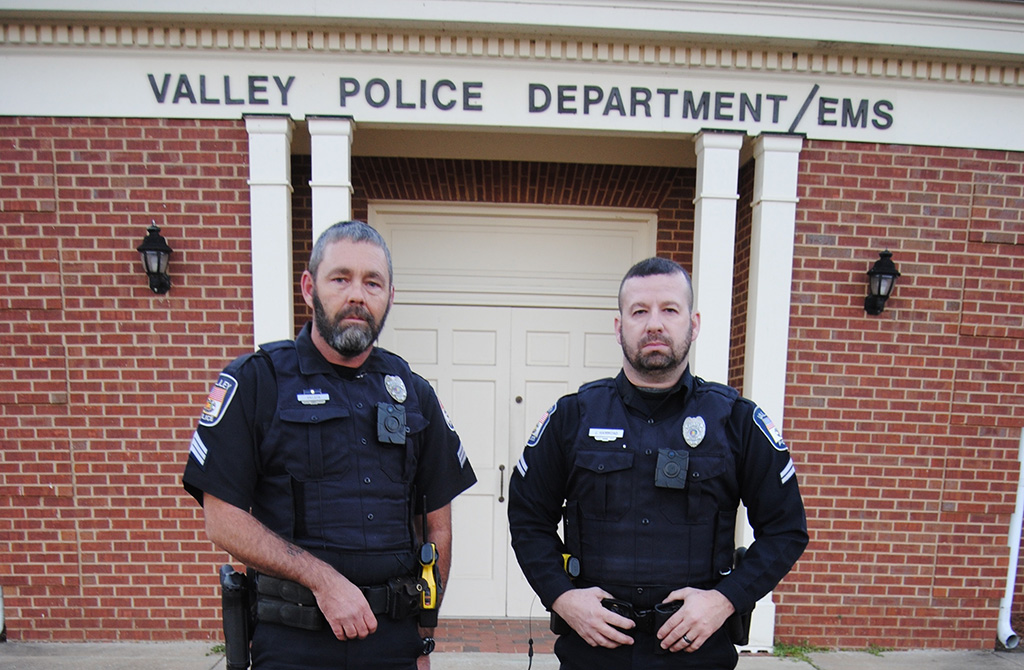 ‘NO SHAVE’ HELPS THE CSC — For the past three years Valley Police Department has allowed officers to grow beards in exchange for donating to the Christian Service Center. Sporting beards above are Sgt. Duane Vallia (left) and Cpl. Jamie Hammond (at right). (Photo by Wayne Clark)

VALLEY — The Valley Police Department has come up with something the police officers enjoy participating in, raising money for a good cause.

A few years ago, Valley Police Chief Tommy Weldon made the decision to start a “No Shave November” tradition amongst the police force. Any officer could go the entire month without shaving, provided they made a donation to the Christian Service Center.

It was so well-received back in 2015 that Chief Weldon followed in up the next year with a “No Shave November and December.” The officers taking part could go two months without shaving.

There was more participation and more money raised for the Christian Service Center, which in turn helped the center make Christmas a little merrier for needy families in Chambers County.

This year the VPD went all out with a “No Shave October, November and December.” A total of 11 officers and three detectives took part in a three-month-long follicle frenzy. A little more than $1,800 was raised for the CSC, and Chief Weldon was so pleased with the way things went, he threw in January as a bonus month.

They didn’t have to make a monetary donation in January, but they could keep their beard a little longer as a reward for having taken part in a worthy cause.

“I think they really enjoyed having beards,” Chief Weldon said.

Sgt. Duane Vallia agrees with that assessment. “Yeah. We enjoyed doing it,” he said.

“At least we didn’t have to shave every day,” joked Cpl. Jamie Hammond.

Sgt. Vallia said the officers took it upon themselves to keep their beards neatly trimmed.

“We didn’t go for the biker look or have them braided or twisted,” he said. “We’re just glad we were able to help the Christian Service Center.”