Valley Police Chief Tommy Weldon reminisces on how things once were 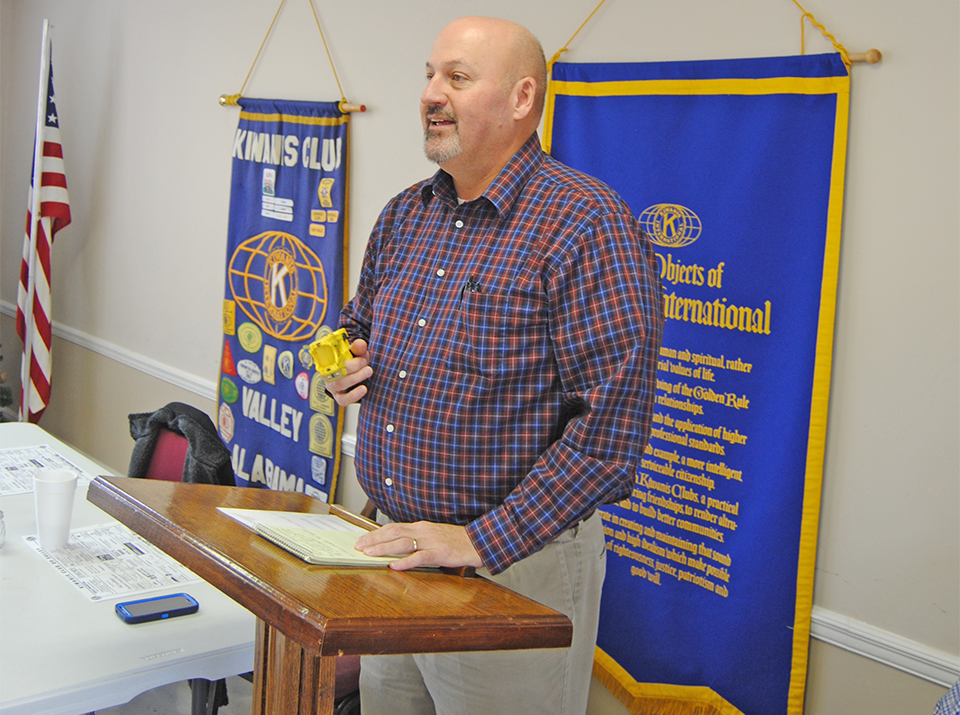 Chief Weldon shows members of the club a taser. (Photo by Wayne Clark)

VALLEY — During the noon hour on Wednesday, Police Chief Tommy Weldon talked about the changes he has seen in law enforcement since starting work with the Valley Police Department. The guest speaker at the Kiwanis Club of Valley, Weldon has been with the VPD since Feb.10, 1985.

On his first day on the job he was issued a uniform.

“I had to buy my own gun,” he said. “I also bought a Cross pen to match the silver badge on my uniform. They’d told me I needed to do that, but when I went on duty I found out that I was the only officer with one.”

The big changes since then involve improvements in technology.

“Back in those days we had clipboards and lots of liquid paper,” he said

Reports were done on typewriters, and when someone made an error the liquid paper was used to correct it.

Small town police officers some 30 years ago were better off than Barney Fife, the Mayberry deputy famous for the one bullet Sheriff Andy Taylor let him keep in his shirt pocket.

“We carried a revolver with six bullets in it,” Chief Weldon said. “We carried 12 extras on our belts. We also had a big five-cell flashlight and a heavy baton on our belts.”

By contrast, most of today’s police officers are equipped with semiautomatic handguns that can fire up to 18 rounds at a time. They have up to 45 bullets on their belts.

Those 1980s straight batons were later replaced with side-handle batons, which could offer an officer some protection should he or she be under attack.

“Pepper spray and tasers came along later,” Weldon said, noting they came along in the late 1990s.

“My pepper spray experience was memorable,” he said with a smile.

He can laugh about it now but back then he couldn’t even open his eyes after being sprayed. “Every time I tried to open my eyes it was like being hit by a two-by-four,” he recalled. “They took me to the police station, and eventually I could get them open.”

That was not the end of his troubles.

“I took a shower and started burning all over again,” he said, explaining that the water from the shower opened the pores of his skin, allowing the pepper spray to irritate him all over again.

“I was taking a class at Troy State’s Phenix City campus at the time, and people would ask me why my eyes were so red,” he said, “and this was two or three days after I was sprayed.”

Most states have laws that require officers to be sprayed under controlled conditions before they are allowed to pepper spray suspects.

“The problem with pepper spray,” said the chief, “is that when an officer is trying to subdue a suspect, the pepper spray can get on bystanders who happen to be nearby,” he said. “They get sprayed, too.”

Pepper spray is a tool used by law enforcement agencies to subdue suspects without having to get into fist fights, something that can leave both an officer and a suspect injured.

Pepper spray was a tool of the 1990s. Since then, law enforcement departments have started using tasers.

This is a controversial method, and some states don’t allow it. It is very effective in rendering someone helpless.

“We have had some cases where a suspect was tased and was injured when they fell down,” Weldon said. “We haven’t had anyone seriously injured, though.”

Tasers were introduced in the early 2000s as a non-lethal weapon for police to subdue a fleeing, belligerent or potentially dangerous people, who would have been subjected to more lethal weapons such as firearms.

A taser fires two small dart-like electrodes, which stay connected to the main unit by conductors, to deliver an electric current to disrupt voluntary control of muscles, causing neuromuscular incapacitation.

“A lot of the people we deal with will run and fight,” he said. “When you ask them why, they tell you it’s what they feel like they have to do. A lot to times, people will see us and start running, and they don’t even have a warrant out on them. Sometimes you will see them throw down a bag of weed.”

The taser is something that strikes fear into people’s hearts.

“People do not want to be tased,” Weldon said. “More often than not, when you tell them you have a taser on them they will comply. The taser is a valuable law enforcement tool. It has reduced the need for hand-to-hand combat.”

New technology inside the patrol car has also greatly improved law enforcement capabilities. In the old days, officers had to write you a ticket when they pulled you over for speeding or running a red light. Today, they type the information into a laptop computer, which prints the ticket.

Cameras, both in the patrol car and worn on an officer’s uniform, have had a major impact in law enforcement.

It was a lot harder to make drug arrests in the old days than it is now. In the old days, the state ABC board would send undercover officers to areas of suspected drug-dealing activity. There were no cell phones, and the two-way radios that were used were as big as bricks. The biggest problem was the lack of video cameras.

Today, an officer in a patrol car a good distance away can watch – and record – drug deals taking place on his laptop or smartphone. This is done by means of a hidden camera placed in a drug-dealing area.

The downside to this is that courts increasingly rely on video evidence.

“It used to be that testimony from an officer meant something,” Chief Weldon said. “Now you have to have it on video.”

“We arrested a guy for selling crack cocaine,” Weldon said of one case in particular. “He showed up on the first day of the trial but didn’t show up after that. The jury never saw him sitting at the defendant’s table. We had some good images of him on video, but the jury couldn’t compare it to anything, and they found him not guilty. If he had been there in court they probably would have found him guilty.”

Valley officers first started wearing body cameras in April 2015. Some of them can do some amazing things. If an officer has it on all the time, it can start recording 30 seconds from before the blue light goes on. A lot of people who have gotten tickets for running a red light can thank this little camera for having evidence they couldn’t beat in court.

There’s an old saying that cameras don’t lie. That’s been borne out with video evidence.

The chief mentioned an instance when a woman was threatening to sue the police department, claiming that an officer had forcibly removed her from her home, tossed her down some stairs and kicked her. The videotape of the incident showed an altercation going on between the woman and a boyfriend she was breaking up with. The boyfriend wanted to enter the house for the purpose of getting some personal items and then leaving.

All the while she was refusing to let him enter while telling him what a low-down dirty dog he was for leaving her for another woman.

To resolve this situation, the officer picked her up, took her to the foot of the stairs and sat her down gently. This allowed the ex-boyfriend to enter the house and get his belongings. While she was seated at the foot of the stairs, the woman apologized to the officers for giving them a bad time, saying that she couldn’t control herself around the man she was breaking up with, that he’d gotten mean to her and had actually thrown her down the steps and kicked her.

This tape, said Chief Weldon, kept the police department from having to investigate an officer’s conduct, something that could involve the officer’s suspension, along with the time and expense of an investigation.

A body camera costs around $300 and there’s an extra $100 for the warranty. VPD has four officers on duty per shift, and each one of them has such a camera. At the end of their shift, everything that happened on their shift is downloaded at a docking station. It goes back into action in the officer’s next shift.

“These cameras are good, but they take a beating,” Chief Weldon said. “One has been in Moore’s Creek, another got wet in a drainage ditch and one fell off an officer’s uniform and got run over by a car.”

Every video is labeled and uploaded onto a CD. “We have to do a ton of work because of them,” the chief said. “But we need to make sure we use them right.

“Technology can be expensive,” said Chief Weldon, “but it’s a necessary component of law enforcement.”