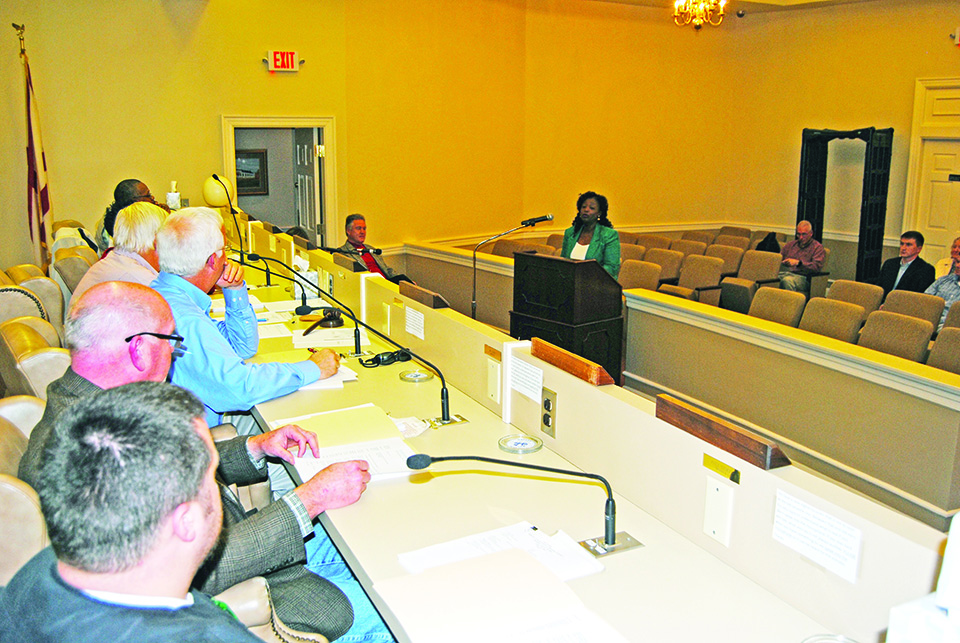 SPEAKING WITH THE COUNCIL — Three people interested in serving on the Valley City Council made their case before the council on Monday. Cassie Carlisle, Vic Anthony and Kendall Andrews took turns speaking and answering questions.

The District 5 seat has been vacant since the death of Lana Wiggins on Jan. 9.

The three River View residents to express interest in the position are Cassie Carlisle, Vic Anthony and Kendall Andrews.

Under state law, the city has 60 days to name a successor. At its next meeting on Feb. 12, the council will vote by paper ballot to elect a new council member. That person will be sworn in on Feb. 26 and will serve the remainder of Wiggins’ term.

“I think I  am qualified to fill this position,” Carlisle said. “I have been a Valley resident for many years. My education, coupled with more than 30 years of work experience in making difficult decisions, resolving issues and handling conflicts make me ideally suited for council service.”

Carlisle said she had thought about running for a council seat in the past.

“My husband and I were raising our two children at the time and my schedule wouldn’t allow it,” she said. “Now that I am retired, I feel the timing is more appropriate. I want to  help our community in a positive and in a forward-thinking manner. I know that  it will involve a lot of work and difficult decision making, but I am ready to step up to the plate and get the job done.”

Carlisle has served on the city’s board of adjustments. Through this experience, she heard citizens speak of their concerns falling on deaf ears.

“I want to lend an ear to the citizens of Valley, acknowledging that their concerns are important. I’d like to be a voice for those who might feel as though they don’t have a voice.”

Lifelong Valley resident Victor D. “Vic” Anthony said he felt ready for the council seat due to his prior service as a police officer and code enforcement officer in Valley.

“I have worked for the City of Valley for many years in two different departments, the Police Department and the Code Enforcement Department,” he said. “Because of my work experience, I am familiar with local city ordinances, enforcing them, and working toward the betterment of the city. It allowed me to build relationships with many members of the community. Also during this time, I assisted in the removal of dilapidated homes and having new homes built for lower income families through Habitat for Humanity and the Fuller Center for Housing.”

Anthony is retired after a 25-year career in law enforcement and now serves as the general manager for a business located in Auburn.

“My new work hours would allow me to effectively serve my community and the people of District 5,” he said.

Kendall Andrews is a lifelong resident of Valley’s River View community. He’a 2011 graduate of Valley High and holds a bachelor’s degree in civil engineering from Auburn University. He currently works with the Lee County Highway Department. He’s on track to receive a professional engineering license in the next two years.

“Filling the District 5 position is important to me because I feel that many young people do not always take an interest in government, especially local government,” Andrews said. “To keep Valley moving forward, I feel that our current council has an obligation to mentor and guide younger generations. I would take this position very serious, and I would be open to the guidance of the council. I feel I have a lot to offer. Having worked closely with Lee County, I feel my knowledge and education with infrastructure and experience working daily with citizens of the community would be an asset for the council and to the city.”

Valley Mayor Leonard Riley asked Carlisle, Anthony and Andrews to talk about what they thought were some of their top concerns with District 5 and the city as a whole.

“I’d also like to see more businesses for young people,” she said.

Anthony said that he had a lot of sentiment tied up with Riverdale Mill and that he’d like to see the mill site developed into a park.

“That’s where I got my first job when I was 16,” he said. “My dad worked there for 30 years; It sure was sad to see it come down. I’d just like to see it continue on as some kind of special place.”

Anthony said that he has two granddaughters and that he’d like to be able to take them places in Valley.

“There are parks they like to go to, but they are out of town,” he said. “I’d like to see us have place like that here in town.”

Andrews said his top priority for Valley is to keep its young people here.

“Jobs are coming, and that’s good,” he said. “We have to give young people reasons to stay here, raise a family and spend their money here.”

Andrews added that Valley has a good location.

It’s perfect,” he said. “Atlanta is on one side and the beach on the other. Property prices are much lower here than they are in most other places. The main thing is that it’s home. I don’t get that same feeling anywhere else.”

“I think we have three really good candidates,” Riley said. “It’s a win-win-win situation for us.”