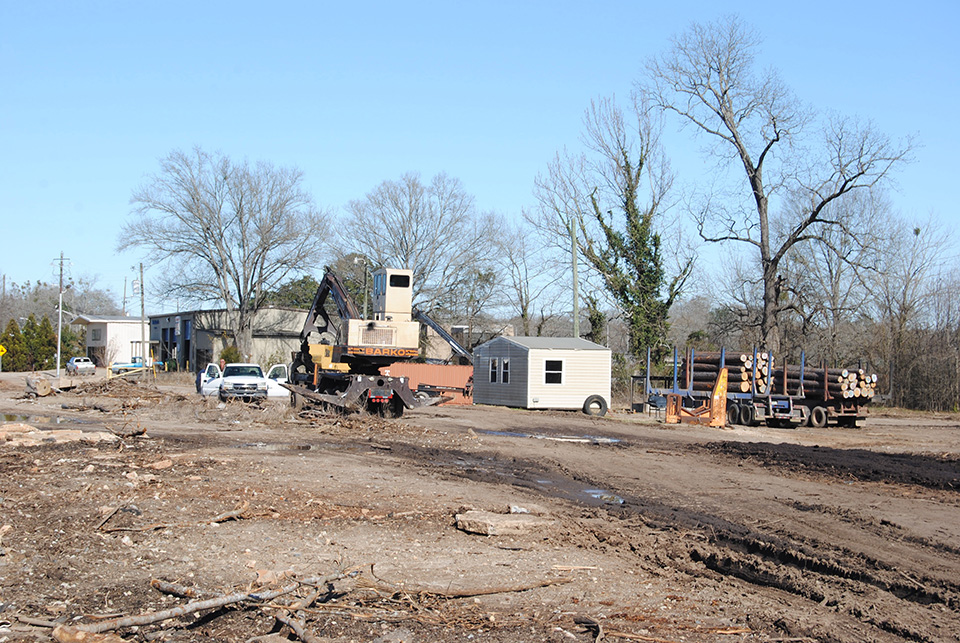 WP WOODYARD SOLD — Located off the big, sweeping curve on West 7th Street, the West Point woodyard has been sold. The 13-acre site has been purchased by the Downtown West Point Development Authority, a seven-member board that promotes downtown revitalization. (Photo by Wayne Clark)

WEST POINT — The Downtown West Point Development Authority has purchased the 13.2-acre
site of the West Point woodyard. Present owner Baseline Forest Services of Wetumpka, Ala., will be relocating its operations to a site off U.S. 431 in Chambers County’s Stroud community.

It’s looks to be  a win-win situation for both the city and Baseline.

The West Point site has served as a transfer station for timber. It has a scale house and scales for weighing the timber that comes in, and there are some large piles of wood on the site.

“I think they will be getting a better location, and this is going to be great for the city,” said Mayor Steve Tramell. “If nothing else, we may have less debris on the city streets.”

At its present location, the woodyard has presented traffic delays when the big log trucks turn onto the site. That won’t be going on when Baseline relocates.

“We feel like we got it at a very good price,” said DWPDA Board Chairman Coleman Reeves. “We’ve been trying to do this for several years. The final sale price was substantially below the initial asking price.”

Baseline’s move to Stroud could happen rather quickly. Some of their on-site equipment has already been broken down for relocation.

“This has been on our radar for several years now,” said Tramell. “The task now is to find a better use for the land. I know for some people anything but a woodyard will be an improvement. What we know is that it’s 13 acres with river frontage.”

Reeves said there are no immediate plans.

“What we need to do is to clean up the site and stabilize it. We are open to ideas of what to do with it. We think it has lots of potential. We are super excited about this project. We think the citizens will like what we do with it.”

The property is adjacent to the City River Park, home to a popular splash pad in the warm weather months.

Finding a new use for the woodyard property has been the city’s comprehensive plan for at least a decade. Now that it’s owned by the DWPDA, there’s now a chance to find better use for the land.

The DWPDA is currently involved in redeveloping a parking lot behind the New Horizon Theatre and a row of stores on West 3rd Avenue.

“It will be a lot better when we are through with it,” Reeves said. “We will be changing the entrance and will be paving it. There will also be some lighting.”

Tramell said that 2018 will be an active year in West Point.

“We will be doing some work in the 10th Street corridor,” he said. “It will be the beginning of a lot of new development in West Point.”