West Point resident reminisces on life in the Valley 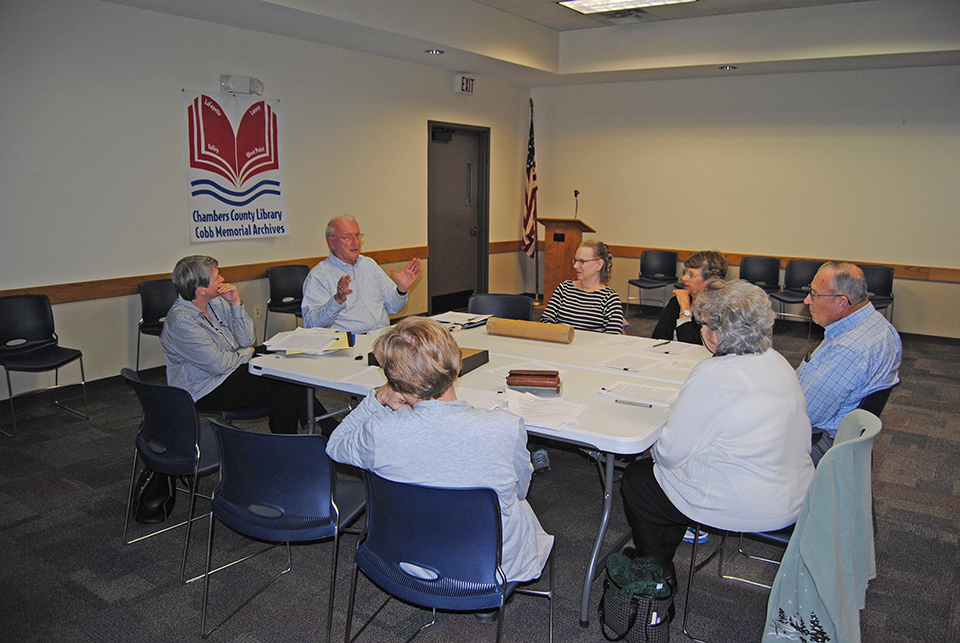 TALKING ABOUT THE VALLEY — Gerald Andrews (at left) recently talked about a manuscript he’s written to a group at Bradshaw-Chambers County Library in Valley. Entitled “Southern Reality in a Mill Village,” Andrews writes about his youth in the Fairfax mill village and later being a “problem doctor,” dealing with management issues in close to three dozen different roles with West Point Manufacturing and its successor companies. (Photo by Wayne Clark)

WEST POINT — A manuscript written by West Point resident Gerald Andrews of his experiences of growing up in the Valley and then rising to senior-level management in WestPoint Pepperell has been praised by two Auburn University professors as something that ought to be in book form.

Andrews grew up under difficult circumstances in a local mill village.

“I was a poor, hardscrabble kid that grew up mostly in my grandmother’s boarding house in the unincorporated town of Fairfax,” he writes in “Southern Reality in a Mill Village. “It was a special place in Alabama where you could copyright your life, and many did.”

Andrews had more than 25 different hourly-paid blue-collar jobs in high school and college. He went on to have four business careers, play a long civic one, earning numerous awards and public recognition.”

It made me realize that throughout my life I have been truly blessed, far beyond that which I deserved,” he wrote. “Growing up, I never had to worry about an embarrassment of riches. I was not an inheritor of money, position, power or a bright, guaranteed future. But I was heir to opportunity, truth, compassion, faith and hard work. In America, that is usually enough, and the mill village was always a melting pot of acceptance. When you have little, nothing punishes one more than a vivid imagination, unless it motivates you – and it did me.”

Andrews was something of a problem doctor in his long business career. He held over 34 management positions along the way.

When he has the manuscript published, it should make for a great read for anyone who grew up in the Valley, who can identify with mill village life and enjoys the colorful anecdotes of the west Georgia-east Alabama region.

Andrews writes about not one, but two accounts involving his family members and the psychic ability of Heard County fortune teller Mayhayley Lancaster. Almost everyone in the west Georgia-East Alabama area has heard Mayhayley stories and will like reading the Andrews connection.

He writes about Chambers County native Joe Louis Barrow and his fame as a boxer, his experiences in high school and college and an interesting time he had a beauty pageant on one occasion. There’s an account of him seeing some robed Klansmen one night, and of the area’s long, tortuous history of race relations.

It just wasn’t right, Andrews said, for black people to have no chance to improve their lot in life. Prior to the 1964 Civil Rights Act, blacks were stuck on the bottom. Textile companies would not hire blacks in any management capacity.

“They could not be shift supervisors, loom fixers or to have any of the better paying jobs, and that was not right,” Andrews said.

“The situation with minorities really touched me,” he said. “In my younger years I didn’t look at minorities as I should have.”

In the 1960s, Andrews was one manager who was willing to break the color barrier. In the 1960s, he hired two young college graduates named Calvin Williams and Oscar Crawley to management positions with the company. They went on to have outstanding careers. Crawley was a three-term mayor in Lanett.

“I’m proud of the fact I gave them an opportunity,” he said.

In the manuscript, Andrews shared some tidbits about the local area many people may not be aware of. In the 1940s, the Guiness Book of World Records listed Lanett Mill as the largest manufacturing center in the world under one roof. Around that same time period, the local affiliate of the Coca-Cola Company had the greatest capital consumption of Coke anywhere in the world. Andrews explains why.

“It was really hot working in the mills,” he said. “They had a monopoly on the drinks that were sold there. When people took a break to cool off, Coca-Cola was all they could get.”

Andrews is especially proud to talk about his experience with the George H. Lanier Council of the Boy Scouts of America. In terms of participation, the council went from being out of the top 200 to being No. 1 in a relatively short period of time. Andrews credits a lot of truly involved local adults for that. He said he was gratified in being part of it.

Should it be published, “Southern Reality in a Mill Village” will be approximately 250 pages in length and will include more than 50 local photos, many of which have never been printed.

Two Auburn professors, George B. Littleton and Jim Buford, have given enthusiastic reviews to it.

“In (this writing) we get to know the stories of many people and places,” said Littleton, an English professor. “Who else among us remembers going not once but twice to visit Mayhayley Lancaster? Who else among us started off collecting coat hangers and coke bottles to sell for pennies, and then rose up to the highest corporate ranks in NYC and around the globe? Gerald is uniquely positioned to tell a unique history, and this is it.”

Mr. Buford has a local connection. He’s a native of Milltown and a 1956 graduate of Chambers County High School. His dad was the vocational coordinator for Lanett city schools and his mom a third grade teacher. He said that he enjoyed reading the manuscript because it reminded him of the Golden Years of the Valley. “The West Point Manufacturing Company furnished the towns with the best in the way of education, housing, medical care, recreation and entertainment – even a professional baseball team (the Valley Rebels)… The children from the Golden Age, including me, are in their seventies and eighties.”