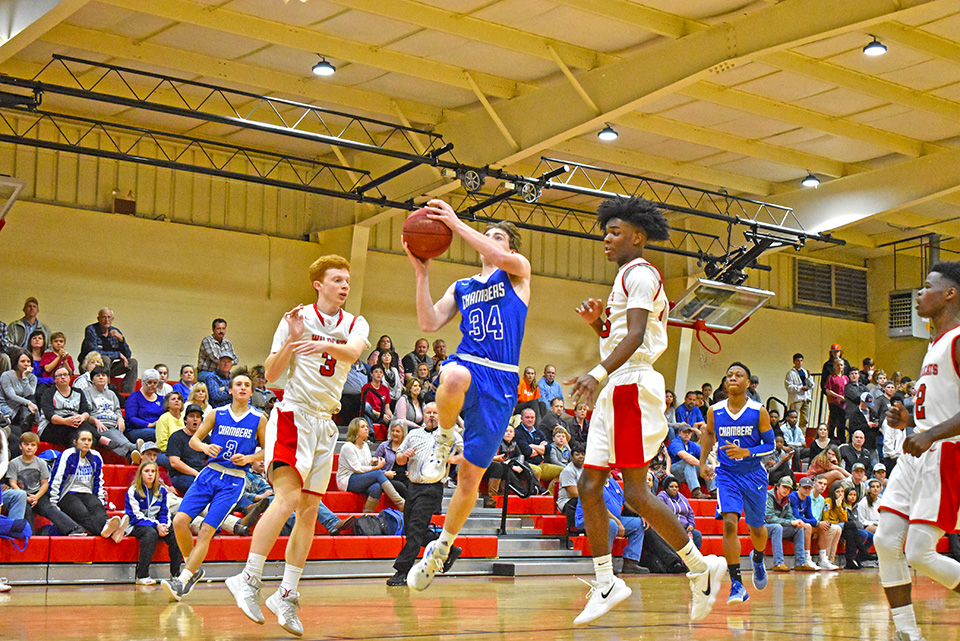 Chambers Academy’s Braxton Allen (34) soars for a layup during his team’s Thursday night loss at Springwood. He scored a team-high seven points. (Photo by Sam Chandler)

LANETT — Thursday night’s game against Chambers Academy started sourly for the Springwood School boys. In a blink, they fell behind by 10 points on their home floor.

“Our message to them is, ‘When things aren’t going right, you can change it,’” he said.

The Wildcats heeded his advice.

Led by senior Gus Davidson, Springwood (8-10) closed the half  — and game — on a decisive run that enabled it to secure a 54-35 victory over its rival.

“Really, it was the boys,” Dorsey said. “They just put it all out there. It was fun to watch.”

Davidson put his team on the board with a 3 from the left wing. His ensuing layup, along with a buzzer-beating floater from Henry Smith, pulled Springwood within three, 10-7, at the end of the first quarter.

Christian Lancaster drilled a 3 from the left wing to push the Wildcats ahead, 14-13, early in the second frame. Davidson added two layups and pair of free throws as he scored 11 of his game-high 19 points in the first half.

“[Dorsey] called on me, and he expected me to bring the energy,” Davidson said. “I brought the energy tonight.”

Springwood held a 22-15 halftime lead, which it extended during the final two quarters. The Wildcats blew the game open when they started the final frame on a 13-0 run.

“Anytime you’re fortunate enough to beat your rival, it just gives you that much more of a boost heading into the weekend,” Dorsey said.

Lancaster joined Davidson in double figures with 11 points. Antonio Roberts and Garret Partridge had six apiece for the Wildcats. Partridge also established a strong post presence and corralled a number of key rebounds.

Chambers Academy will return to action tonight against Evangel. Springwood will resume play on Tuesday against Glenwood.