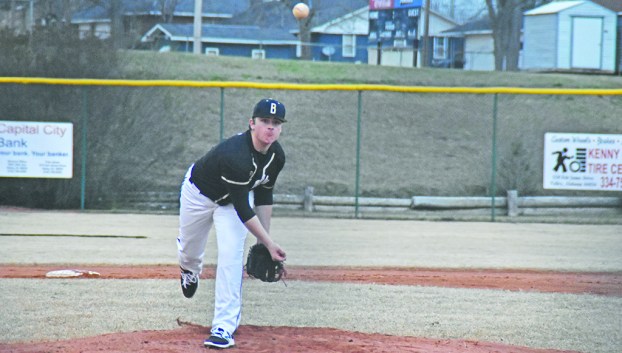 LANETT — The Beulah High School baseball team had to exercise patience before its season opener.

The Bobcats’ meeting with Lanett was first rescheduled from Monday to Tuesday due to a timing conflict with the Panthers’ elite eight basketball game. First pitch was then delayed again for about 30 minutes Tuesday evening until an umpire crew arrived at Jennings Field.

Once the contest began, Beulah wasted no time in taking command. The Bobcats plated three first-inning runs en route to a dominant 21-0 victory that was called after four innings.

Isaac Gardner, Colby Richey and Austin Sluder combined to throw a no-hitter for the Bobcats. They allowed only one base runner all evening.

“They had some speed out on the mound,” Lanett head coach Hunter Ames said. “We knew that was coming.”

While its own staff cobbled together a near-flawless performance, Beulah capitalized on Lanett’s pitching struggles. The Panthers surrendered 13 walks and hit seven batters.

Beulah scored the bulk of its runs on passed balls and fielding errors. Still, Ames praised the effort of his starting pitcher, Rovilan Castro. Despite the command issues, he gave up only a couple hits.

“I thought he pitched a heck of a game,” Ames said. “I was proud of him. We’ve just got to continually work on defense.”

It plagued the Panthers from the outset.

Beulah’s leadoff hitter, Andruw Coxwell, laid down a bunt to begin the game. The play at first would have been close, but the throw went sailing over the first baseman’s head.

Castro then hit and walked the next two batters to load the bases. Coxwell scored on a subsequent passed ball before Wesley Huddleston helped drive in the other two runs on a sacrifice groundout.

Beulah extended its lead to 4-0 in the second inning and 8-0 in the third. The Bobcats plated their 13 final runs in a marathon fourth inning that featured showers of rain and flurries of Lanett errors.

Even with the lopsided outcome, Russell saw areas in need of improvement.

“We should have done things a little bit better,” he said. “We missed some signs, so there are some weak points we took from the game that we really need to improve on.”

Beulah will have a chance to fine-tune its play on Wednesday when it travels to Reeltown. Lanett, meanwhile, will host Anniston.