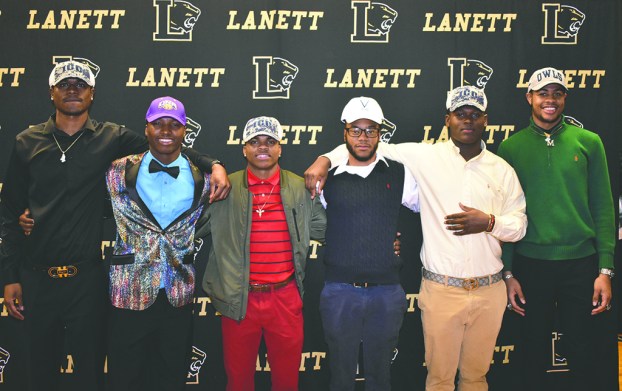 LANETT — They revealed their decisions one by one.

At first, it was Anquaevious Pollard who slipped on a tan-and-blue cap with the letters “ICC” stitched above the brim. Ty Truitt and Baraskious Dowdell then followed his lead.

The three Lanett High School seniors all signed to continue their football careers at  Independence Community College in Independence, Kan., during a ceremony held in the LHS auditorium on Wednesday.

Their selections were driven by multiple factors.

“I wanted to finish my career out with my bros,” said Truitt, grinning, “because they’ve been here since day one.”

Originally, Truitt intended to sign with Highland Community College, also in Kansas. But the All-State wide receiver flipped his commitment at the last minute after Pollard chose ICC.

Pollard visited the campus last week and came away with a strong impression.

“I like the way they put their kids in a better position to make it to the next level,” Pollard said. “That’s what I’m trying to do.”

Ultimately, the All-State wide receiver — and reigning Class 2A Player of the Year for basketball — elected to pursue the sport that holds the most promise long term.

“I have an advantage in football,” he said. “It’s not very often you see a 6-foot-7 receiver.”

Beneath an eye-patched pirate were the words “Last Chance U.”

This inclusion was a nod to the hit Netflix show with the same name. In its first two seasons, “Last Chance U” chronicled the 2015 and 2016 campaigns of the East Mississippi Community College football team.

Netflix announced last August that the show’s third season, which was recorded in the fall, would center on the ICC football team.

Pollard said the possibility of starring in the fourth season, which will be recorded this coming fall, factored into his decision.

“If I’m watching Netflix, I always watch ‘Last Chance U,’” he said. “I’m going to enjoy this.”

Athletes in previous seasons of the show gained increased exposure before a national audience. That fact wasn’t lost on Truitt.

“I wanted to get on Netflix,” he said. “I wanted everybody to see me come up from the start.”

Pollard, Truitt and Dowdell will likely spend a couple of seasons at ICC before looking for roster spots at the NCAA Division I level.

Dowdell, the 2A Lineman of the Year, eschewed a firm offer from Division II Miles College in hopes that his stint at junior college will lead to future opportunities.

“They have signed 32 kids to Division I [programs],” Dowdell said of ICC. “I feel like I should be DI.”

All three Panthers played significant roles in Lanett’s undefeated 2017 season that culminated in the 2A state title.

They will now aim to make similar impacts for ICC.