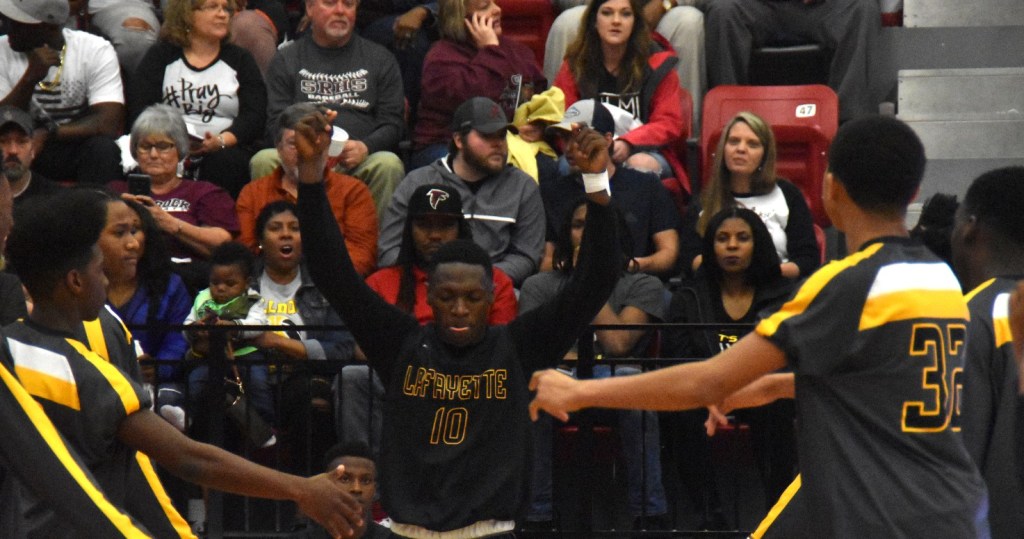 The Lions made one happen.

Section point guard Bryson Woodall banked in a buzzer-beating 3-pointer from well beyond the right wing at the end of regulation to force overtime in Friday’s Class 2A Northeast Regional semifinal at Jacksonville State University.

The Lions then outscored LaFayette by six in the four-minute extra period to capture a heart-pounding, 68-62 victory inside a roaring Pete Mathews Coliseum.

The loss ended the Bulldogs’ season.

“I thought our kids executed well for most of the game,” Threadgill said. ” I’m very proud of them for giving themselves the opportunity to win the game with 3.5 seconds to go. They had done everything they needed to do to that point.”

Before Section’s season-extending play, LaFayette guard Markevious Moore sank a pair of free throws to give the Bulldogs a 60-57 lead. Threadgill said he debated calling a timeout following the free throws. But he opted not to.

As a result, Woodall collected the inbounds pass with fewer than five seconds left on the clock. He then dribbled up the right sideline and pulled up after taking a few steps past midcourt. That’s when he heaved the ball toward the hoop, which swallowed his deflection off the glass.

Woodall, who posted a game-high 23 points, was mobbed by teammates after the shot dropped.

“Luckily, it fell in tonight,” he said, adding that even he was surprised the lob sank.

“You can see by the emotion what it means to us,” Section head coach Jamie Pruitt said during an emotional postgame conference. “We just kept battling.”

LaFayette was forced to play the final three minutes of the fourth quarter — and all of overtime — without standout point guard Corey Boston, who fouled out. Senior JaMarquez Boston-Gaines and sophomore Matavais Burton helped compensate for Boston’s absence. Both hit key shots to keep their team in contention as time ticked away.

Boston-Gaines finished with 20 points and 18 rebounds, 11 of which came on the offensive end. Burton poured in 17 points.

“I just wanted to do the best I could for them,” said Boston-Gaines, one of the team’s lone veterans. “They’re young, and I know how much the game means to them.”

Boston-Gaines closed in on a double-double by halftime. He had 11 points and eight rebounds at the break, when the Bulldogs held a 36-32 advantage. They maintained a one-point edge, 38-37, entering the final frame before Section made multiple surges.

“We accomplished some amazing things this year,” Burton said. “I felt like we got better during the season. Hopefully next year we’ll be back here again.”

With the win, Section (24-6)  advances to Monday’s regional final against Lanett. Tipoff is set for 5:45 p.m. EST at Jacksonville State.