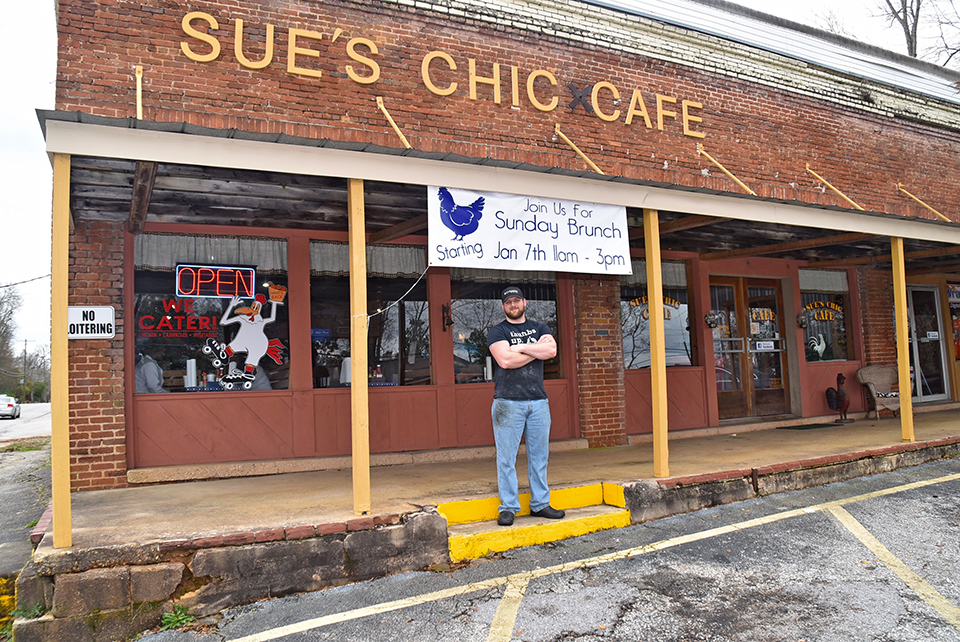 VALLEY — Sue’s Chic Café has been under new ownership for nearly two months and that owner, Robert Cox, couldn’t be happier with the results.

Cox’s decision to purchase the 36-year-old restaurant came after he spent time last year working in the kitchen.

Leaving Sue’s to go work in Auburn, Cox was contacted about considering taking over ownership.

“I told them that was my goal in life to own my own restaurant,” he said. “Ever since I was 18, that’s what I wanted to do.”

Cox, whose mother has worked at Sue’s for 14 years, noted that although he was excited over the prospect, he took some time before making a final decision.

“I’ve always loved coming here to eat,” he said. “I loved the fried chicken. You can’t go wrong with it.”

Since taking over, Cox has made a few changes, including opening on Sunday’s and adding some new menu items.

“Sunday’s been really good for us,” he said.
“It’s bringing new people in and the older people back in.”

Items added to the menu include a chicken fried chicken with white gravy, hash brown casserole and whole catfish.

“Just a few things here and there to spice things up,” Cox said with a laugh.

The most popular new item has been the chicken fried chicken, he added.

“We do wraps now too, which they’ve never adone before,” Cox continued. “Everyone seems to like the Sue Wrap the most.”

The staff has also been receptive to Cox’s ownership, mainly because according to him, “I already knew everyone.”

Going forward, Cox said his grand plan is to get Sue’s back to where it was in the mill days.

“They used to kill it over here,” he said. “Get it
back to that and give everyone something good to eat.”

He doesn’t have any current plans to expand or move but said he might reconsider expansion if it gets busy enough. Sue’s Chic Café also caters now as well. They can be found at 1100 Boulevard, Valley, and reached by phone at 334-756-7944.