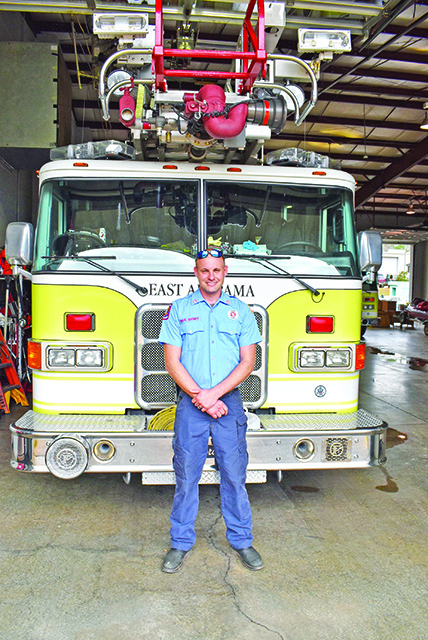 Steven Thomas | Times-News All smiles: Lt. Bryant Story was all smiles as he poses for a photo with a fire truck.

VALLEY — Bryant Story has been a member of the East Alabama Fire Department for the past seven years and in his words, “I wouldn’t want to do anything else.”

This lieutenant got started when he as a logger and made the decision to change careers.

“It’s a great job,” he said. “It’s fun. You get time off with your family. Sometimes it doesn’t feel like work.”

Story grew up in the Valley-area and noted he was glad to help keep his home safe.

“It’s great to be able to serve the community I grew up in,” he said.

While his time as a firefighter has been enjoyable, Story said there were some moments that stood out.

“You take the good with the bad,” he said. “Some calls you go on are not so great. You just pick yourself up and keep going and learn from it.”

Outside of calls, Story has had to deal with changes at the fire station.

About a year ago he was promoted to the rank of lieutenant. This came with many changes, includes becoming a shift supervisor at the station.

This was actually his first time being in charge of the shift.

“The biggest thing I learned was getting your guys respect,” he said. “It’s most crucial. Either they will make you look good or make you look bad. If you have their respect, they won’t mind working for you.”

When asked if they ever give him a hard time, Story had one thing to say, “All the time!”

“That’s part of it. If they’re not picking on you, you’ve got something to worry about.”

Living at the station, according to Story, is like having a “home away from home.”

Outside of the station, Story spends his time with his wife, Hollie, and two children: 4-year-old Landon and 2-year-old Paisley.

When asked what his wife thought of him being gone for two-days straight, Story laughed and said she didn’t like those days.

“She doesn’t enjoy me being gone two nights but she likes the time off [the four days he is not at work],” he said. “At least I think she does.”

On his off days, Story does work around the house and goes hunting and fishing.

“I go after whatever is in season,” he said with a laugh, noting he prefers hunting deer with a bow most of all.

Overall, Story had nothing but good things to say about his time at the station and off the clock.

LANETT — A tremendous amount of work has been done over the past few months at the Lanett Municipal Airport.... read more