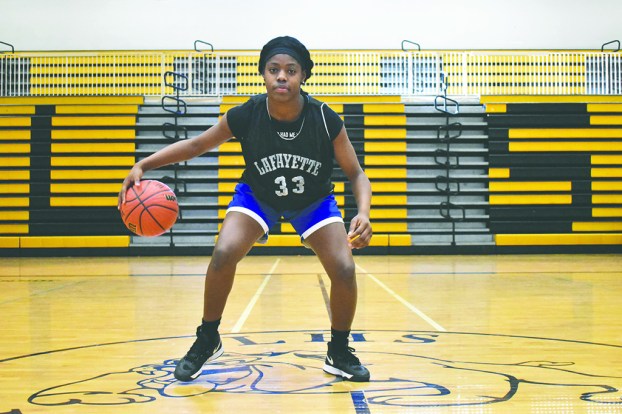 LaFayette High School freshman Feliah Greer is averaging more than 18 points and 18 rebounds per game in her first season of high school basketball.

But the freshman didn’t walk away satisfied with her double-double performance.

“I was telling somebody, ‘As a ninth-grader, if I’d had 13 points and 16 rebounds, I’d have thought I was a darn all-star,’” LaFayette girls basketball coach Michael Bratcher said. “Now it’s to the point when that happens, people look at her and say, ‘Uh, she could have done better.’”

Greer has set a high bar.

In her first season of high school basketball, she is averaging 18.4 points and 18.5 rebounds per game. Her production has helped LaFayette (14-10) reach tonight’s Class 2A, Area 8 tournament final at Lanett.

Already, the Lady Bulldogs have secured their spot in the subregional round of the state playoffs, which begin next week.

“It’s been a seamless transition,” Greer said of her inaugural high school season.

Her prolific contributions have come amid a position change. Before she transferred to LaFayette from Lanett in November 2016, Greer played mostly on the perimeter as a guard and a forward.

“But since I moved to LaFayette — they don’t have an inside player — so I had no choice but to move to the inside,” she said.

Bratcher uses Greer in a hybrid  “point-forward” role. She brings the ball up court when other teams press but serves as a center on set offensive plays.

Greer, who stands 5-foot-7, is often overmatched in the paint by taller players. But she doesn’t let the height disadvantage deter her.

“That’s where the numbers kind of get silly,” Bratcher said. “She’s almost like the Charles Barkley of high school right now. Her height does not say that she should be down there banging and getting rebounds like she does, but she is.”

Bratcher attributes Greer’s  tenacity on the boards to her “alpha personality.” His star freshman doesn’t want to be outshined.

She certainly wasn’t on Monday.

In the first round of the area tournament against Reeltown, Greer set the tone. She intercepted passes, converted coast-to-coast layups and scored on multiple second-chance putbacks.

“She has this uncanny ability of knowing where the ball is going to bounce off the rim,” Bratcher said. “It’s something you can’t teach. She has an instinctive ability of finding that ball.”

With the addition of Greer, LaFayette has increased its average point total by 17 points per game. The Lady Bulldogs also have improved their overall record.

That is what Greer cares about. Her only goal entering the season was to end it by capturing a state championship ring.

Her team’s postseason march continues with tonight’s matchup at Lanett, a team it has lost to twice this season. But Greer remains optimistic.