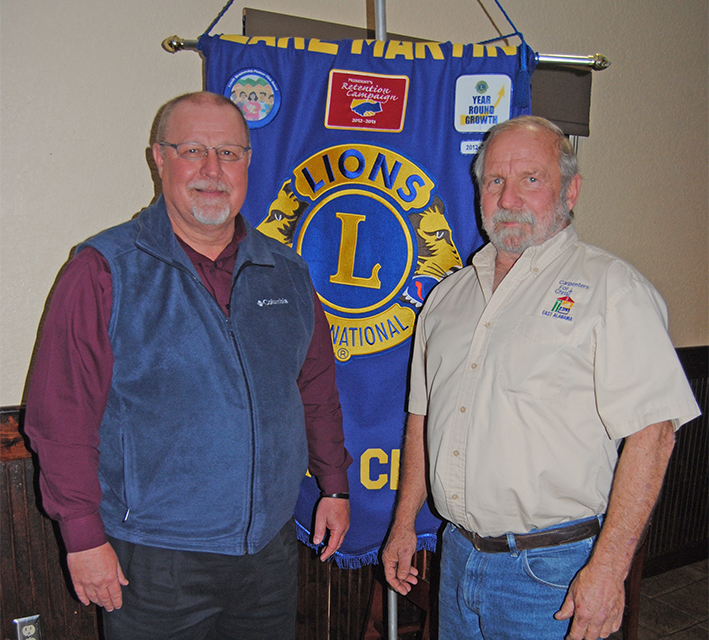 VALLEY — Guest speaker Chuck Goodwin talked about finding a new and rewarding career path at Monday night’s meeting of the Valley Lions Club. He didn’t find it under the best of circumstances. His job was eliminated in 2014 after 30 years in that same field. An ordained minister, Goodwin had faith that something would open up for him.

“I knew that God would move me and my family in a new direction,” he said.

What better new career for someone who’s gone through job loss than to help others find career opportunities?

“We do anything there is in the way of employment,” Goodwin said. “We can prepare people for interviews and make resumes for them. A lot of people don’t know how to interview for a job. We help them with that. We offer advice on how to dress.”

“We call the people we work with consumers,’ he added. “I don’t look for disabilities, I look for abilities.”

Goodwin works the west central Georgia region. He does lots of interviews and lots of paperwork.

“When you’re working with the government you have to do that,” he said.

He’s become a fierce advocate for persuading businesses to give his consumers a chance.

“They want to work,” he said. “They will be there every day for you, they will work hard and be loyal.”

The Achievement Center has many success stories. Some of their consumers are substitute teachers, many work in factories, fast food places and grocery stores.

To cite one example, Givorns in Valley is providing gainful employment to local resident Larry Presley, who suffered a debilitating stroke several years ago. He’s now doing a great job of restocking shelves, and Givorns is glad to have him.

Goodwin works with seniors at such schools as Troup and Callaway High.

“They know they are not going on to college,” he said. “We teach them job readiness. They can work in restaurants, hotels and grocery stores.”

The Achievement Center will pay consumers a minimum salary for a period of time. They help them build up their resumes and, in some cases, teach them skills in house.

“Some of our consumers are working in the back,” Goodwin said. “They work for local businesses like Briggs & Stratton in Auburn. They assemble and box up fuel filters and fuel hoses on a piece-rate system. Some of them are making $12 to $13 an hour.”

Some of these consumers, said Goodwin, have a disability that keeps them from being proficient in multitasking, but when it comes to doing something repetitively, they can be really good at it, much better than most skilled multi-taskers.

On Monday, Goodwin got a new job title: operations manager. He succeeds Mike Morehouse, who is retiring. Many local theatre goers know Morehouse for the many roles he’s expertly played on the stage of the New Horizon Theatre in downtown West Point.

“Not everyone who comes to us is a success story,” Goodwin said. “I wish they were. More often than not, though, they are success stories. When it comes to employment, if we can make something work we will.”

Businesses are encouraged to be flexible and work with organizations like the Achievement Center.

“Because of a disability, some of our consumers can’t stand up for an eight-hour shift,” Goodwin said. “A lot of our consumers are on Medicaid. They already have benefits. Since 1961, there has never been a liability claim on a business,”

Goodwin cited Givorns, Parker’s Foods in LaFayette, Teague’s, McDonald’s, the LaFayette Christian School as businesses or entities that had provided employment for consumers placed by the Achievement Center.

“We give people a sense of worth,” Goodwin said. “If the truth be told, each one of us has some kind of disability. It just hasn’t been documented.”

“We have a dedicated, quality-oriented labor force and a full-time engineering staff,” Goodwin said. “We can offer competitive prices and negotiable rates. Our goods and services are top notch. We can provide just-in-time delivery. Business can save on overhead, travel, warehousing and production space.”