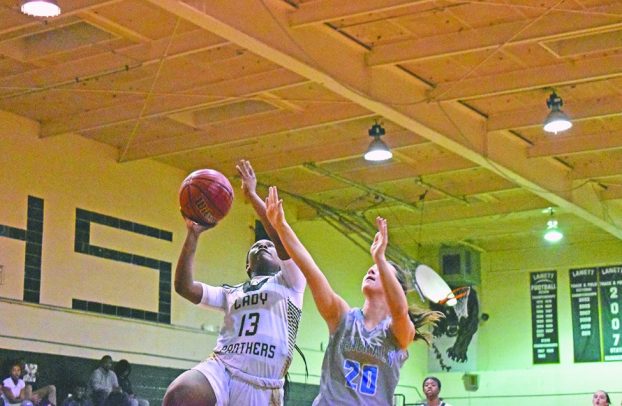 Lanett High School junior guard Ambria Jackson posted a game-high 22 points in the Lady Panthers’ win over Horseshoe Bend on Monday in the first round of the Class 2A, Area 8 tournament. (Photo by Sam Chandler)

LANETT — The Lanett High School girls basketball team earned its first top 10 ranking of the season last week. The Alabama Sports Writers Association designated the Lady Panthers as the No. 9 team in 2A.

Lanett (13-5) dispatched Horseshoe Bend in the first round of the 2A, Area 8 tournament, 62-37, punching its ticket to Friday’s area championship against LaFayette.

“We had to come out fast,” Lanett head coach Charlie Williams said. “In the playoffs, it’s one and done, so you can’t let teams hang around.”

The Lady Panthers left nothing to chance in front of their home crowd.

Spurred by 12 early points from Ambria Jackson, they opened a 27-7 first-quarter lead. The junior guard connected from beyond the arc, fought through contact for layups and finished fast breaks.

There were more than a few.

Lanett deployed a full-court press from the outset that Horseshoe Bend struggled to break. Rarely in the first half did the Lady Generals advance past half court before losing possession.

“We started off a little slow,” Horseshoe Bend head coach Erica Meigs said. “The whole thing the past couple of ball games is, I need three and a half to four quarters every ball game, because we usually play two good quarters.”

Meigs’ squad came out stronger in the second half. By then it was too late.

Lanett held a 42-12 lead at intermission as Jackson and Makyia Broughton carried their team. Jackson posted 16 of her game-high 22 points in the first and second quarters. Broughton had 11 of her 14 points in the same span.

“She brought a lot of energy to the team tonight,” Williams said of Jackson.

Lanett entered the final quarter leading 57-30. Then, the Lady Panthers sent in their reserves to seal the victory.

On Friday, the Lady Panthers will attempt to continue an identical trend against LaFayette, which they defeated 58-53 on Jan. 5 and 46-38 on Jan. 20.

Williams said that consistency will be key to another triumph.

“If you do the small things right in basketball, everything else takes care of itself,”  he said.