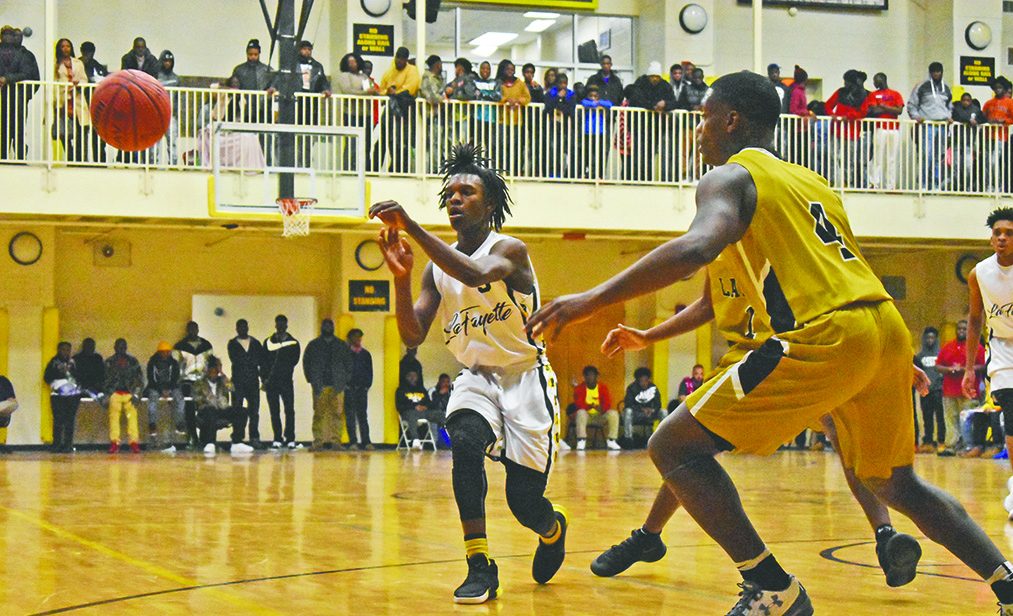 LaFAYETTE — The LaFayette High School boys basketball team made it back to campus around midnight on Tuesday.

But Obadiah Threadgill didn’t head home immediately following his team’s arrival from Collinsville, which it defeated 59-47 in a Class 2A sub-regional playoff game.

Instead, he stuck around to unload the bus and start preparing for the next matchup. He finally left around 1 a.m. Then, he was back by 7:30.

“It’s definitely that time of year,” said Threadgill, LaFayette’s head coach. “You’ve kind of got to burn a little midnight oil. But our guys don’t mind it.”

Actually, they savor it. After practice ended Wednesday evening, a handful of Bulldogs remained in the school’s gymnasium to hoist extra shots and soak their legs in ice baths.

Both are measures LaFayette (18-9) hopes will provide it with an edge entering today’s 2A Northeast region semifinal game against Section. Tipoff is scheduled for 5:30 p.m. EST in the Pete Mathews Coliseum at Jacksonville State University.

On the line will be a spot in Monday’s region final (aka elite eight) against either Lanett or Vincent.

“We’re just trying to keep them focused, trying to give them an opportunity to be successful…but still be sound and still do the things that they’ve been taught to do,” Threadgill said. “If they do those things, we have a chance.”

It won’t be easy.

Section entered the postseason as the state’s top-ranked team. In Tuesday’s sub-regional round, the Lions flattened Ranburne, 101-58. They beat Fyffe in last week’s area final, 91-51.

“The five they put on the floor are really good,” Threadgill said. “They’re ranked number one for a reason.”

LaFayette, ranked sixth in the most recent state poll, also has been playing well as of late. Before the win at Collinsville, the Bulldogs pushed rival Lanett to the brink in the area final before falling short.

They will look to prevent a similar outcome against Section. Sophomore point guard Corey Boston will be leading the charge.

The go-to ball-handler in LaFayette’s up-tempo attack can penetrate through defenses, zip beeline passes to teammates and knock down shots from long range. He also has something to prove.

Boston committed a costly turnover with the game on the line in last year’s region final against Lanett. The Panthers won by three points to advance to the final four. That miscue has been weighing heavily on Boston’s mind ever since.

“This year, I’m trying to turn it around and make up for that mistake,” he said. “I’ve got to put my team on my back, got to correct it, got to redeem myself this year.”

But Boston has a group of teammates he can rely on as well. It includes fellow sophomores Markevious Moore, Jordan Wallace, Jordan Walker and Matavais Burton — who scored 21 points in the Bulldogs’ win at Collinsville — along with senior JaMarquez Boston-Gaines. They will be tasked with limiting a Section team that thrives in the halfcourt, thanks to its large lineup. The Lions boast four veteran players 6-foot-2 or taller. LaFayette has one of similar height: 6-foot-3 eighth-grader Antavious Woody.

“We don’t care about age differential, and we don’t really care about size differential,” Threadgill said. “We’ve been one of the most undersized teams in every single game that we’ve played, yet we find ourselves able to beat some other teams when we’re able to put 32 minutes together.”

Rebounding will be key for the Bulldogs if they want to extend their season. The fewer second-chance opportunities they surrender, the greater chance they have of punching their ticket to Monday’s region final.

Boston has faith his team will come through. He wants to keep burning the midnight oil.

“We can pretty much beat anybody, for real, if we put our minds to it,” Boston said. “Why not us?”