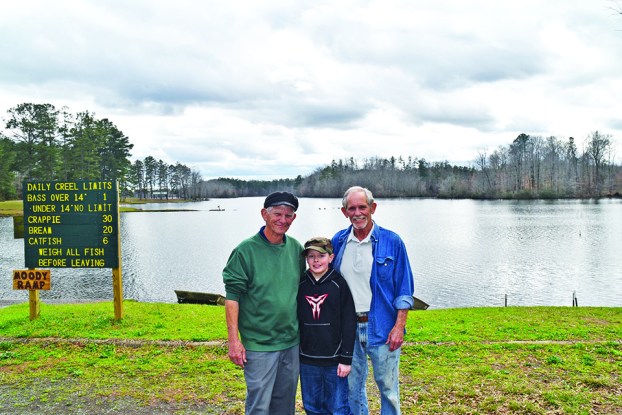 Steven Thomas | Times-News Picturesque Pond: From left are Mike Craig, his grandson Ben Warren and Ted Craig. Mike and Ted are the managers of Chambers County Lake and are coming up on their one year anniversary.

LaFAYETTE — Chambers County Lake will be hosting a series of fishing tournaments this spring and manager Ted Craig couldn’t be more excited.

Craig and his brother, Mike, are coming up on their one year anniversary of taking over as managers of the lake.

The 187-acre lake is located at 1145 County Road 292 in LaFayette and is open from sunrise to sunset six days a week, being closed on Thursdays.

The idea of a tournament is exciting to the brothers, in no small part because it was one of the reasons that led to taking on the responsibility.

Partnering up with the Greater Valley Area Chamber of Commerce, the contests will run for an entire month, starting this Thursday, March 1. Competitors will have until March 31 to catch as many crappie as they can. There is a $15 entry fee per tournament. Contestants can also pay $25 if they plan on entering two tournaments and $35 for all three.

Judging will be done in three categories: largest fish, most number of fish and most weight of fish. Payouts are $100, $150 and $250, respectively.

The month of April will feature a new fish, bass, followed by catfish in May.

Craig encourages everyone to come out and fish as many times as they can each month for a chance to win any or all payouts.

Despite his excitement for the coming event, Craig was even more excited about what they plan in June: a kid’s fishing tournament.

“The entry fees we’re collecting on all this will be added to $1000 given to us by the Chamber of Commerce to put on a kid’s tournament,” he said.

The lake will even be getting help for this event with the sheriff’s department dive team offering to help set up a net along a cove.

“We’ll then pick up from Auburn, 500 to 600 pounds of fish,” Craig said, adding they hope to see roughly 200 children in attendance. “If we can get about 200 of them, then that’s 200 potential children that get to see what nature is all about.”

Craig has high hopes for the tournament.

“If it is successful this year, we can do this annually,” he said.

Craig said that in the year he and his brother have been managers, they have been able to expand awareness of the area.

“We’re pulling people from Macon County, Tallapoosa, I mean all around,” he said, “and even into Georgia.”

The pair have also helped expand what’s available at the lake, including more camping area and picnicking locations.

VALLEY — The City of Valley has hired a consultant to help both the city and the East Alabama Water,... read more