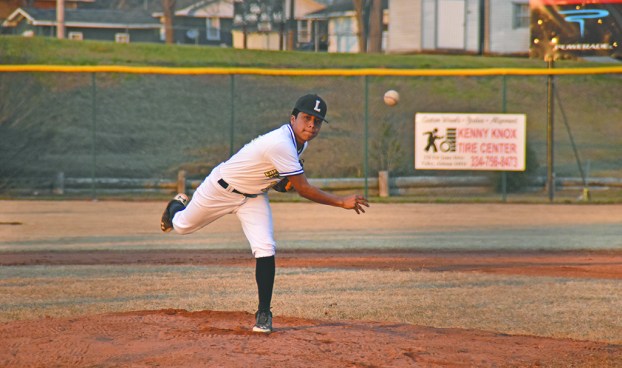 The Lanett High School baseball program consists largely of student-athletes who have never before played the game. Rovilan Castro (above), for example, went from a freshman newcomer in 2017 to the team’s sophomore ace in 2018. (Photo by Sam Chandler)

LANETT — Hunter Ames has fielded the question on multiple occasions.

When, fans ask, will the Lanett High School baseball program achieve the level of success experienced by the school’s football and basketball teams?

“It’s a process,” he said. “I mean, they didn’t get there over night. That’s what I preach to these guys, just buy into the process, and we’ll get there.”

Ames served as an assistant coach to Chip Seagle in each of the past two seasons. This spring, he has taken over the lead role. His goal is to help the program continue moving in the right direction.

The Panthers have won two games in each of the last two seasons. But Ames believes that brighter days are on the horizon.

“The pieces are coming together,” he said.

Experience is the cornerstone.

With the exception of first baseman Lavante McCullough, each varsity starter has at least one season of baseball under his belt.

That’s a big step for Lanett.

In years past, more than a few members of the varsity team had never before played organized baseball.

The main factor contributing to the inexperience is the city of Lanett’s lack of a recreational program.

Ames estimates that 70 to 75 percent of students who first join his team are brand new to the game. That has presented obvious challenges.

“We’re having to approach it from a Little League standpoint at the beginning, in order to build it up to where it needs to be,” Ames said.

Steadily, the program has progressed.

Nearly 30 student-athletes are playing on either the varsity or junior varsity squads this season, which is an increase from previous campaigns. Lanett’s schedule has grown as well.

Two springs ago, the Panthers played fewer than 10 games. This spring, they will navigate a 21-contest slate.

Already, they have secured a victory. Lanett won on Wednesday against Anniston, although it was the result of a forfeit. Nevertheless, a win is a win.

Ames is at the root of the evolution. His father, Ron Ames, played at Lanett in the 1970s, and Hunter Ames grew up listening to him tell stories about his glory days on the diamond.

The family tie is what most attracted Ames to Lanett, even amid its struggles.

He said the Panthers last appeared in the playoffs more than a decade ago.

Collectively, they are in charge of molding a promising crop of players that includes only one senior, Shon Meadows.

Story, meanwhile, will start in centerfield and fill in at shortstop as needed.

“He is an excellent baseball player,” Ames said of Story. “I like his control of the outfield.”

Castro started on the mound in Lanett’s opener against Beulah, despite picking up a glove for the first time last season.

Ames said he has high hopes for his developing ace. Castro, who has taken to the game quickly, does too.

“I’m going to play until I graduate,” he said.

His passion is a product of the process. Player by player, the Panthers are buying in.