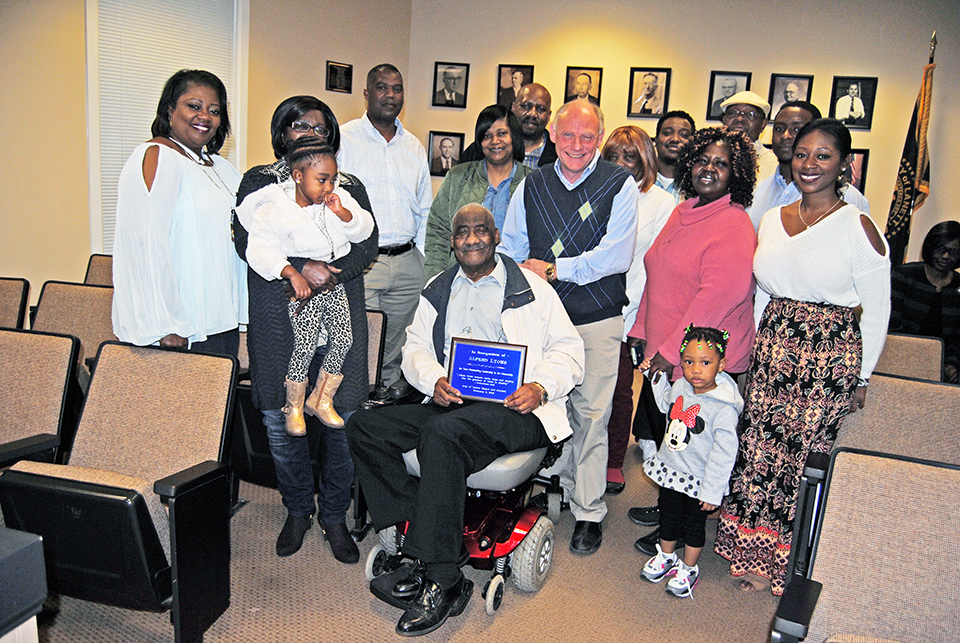 HONORED BY THE CITY — Alfred Lyons (at center) was one of three community leaders honored with plaque presentations at Monday’s meeting of the Lanett City Council. Lyons, who is recovering from a recent illness, said that he really appreciated the award. He was accompanied by a large number of family members and friends. His wife, Betty Sue Lyons, introduced them one by one to the council. “I want to thank you all for coming tonight,” said Mayor Kyle McCoy. “Each one of the people we are recognizing tonight is truly deserving of this recognition.” (Photo by Wayne Clark)

“These people have been pillars in our community for so long,” said Mayor Kyle McCoy. “Alfred has been with us through thick and thin. He and Willie Ramsey worked to get West Shawmut annexed into Lanett. Essie Mae Harris was a teacher for many years, first at Lanier High and later on at Lanett High. She was one of my teachers at Lanett High and very definitely made an impression on all of us. We are very thankful for that. Mack Lett was a principal in the LaFayette area. Our police chief, Angie Spates, was one of his students.”

Fire/EMS Chief Johnny Allen said that he had Harris while in high school.

“She was a very memorable teacher,” he said. “She’s a wonderful lady, and we think the world of her.”

Chief Spates said that John P. Powell was her principal one year when she was in high school and that Mack Lett was the principal the next year.

“He has an amazing memory,” she said. “I saw him several years ago, and even though I hadn’t seen him in many years he knew me instantly. That meant a lot to me. He’s the sort of person who never forgets you and always has kind words to say.”

Lyons has had some health challenges in recent weeks. For many years he has attended almost every city council meeting in Lanett. He’s been conspicuously absent for several weeks. He was back in the council chamber on Monday and was warmly greeted by council members, department heads and townspeople present for the meeting. He rode into the room on a motorized chair and was in very good spirits, joking with everyone and just being his normal self.

He brushed away tears when the mayor and other members of the council talked about what he’d meant to the city for a long period of time.

“We’re doing this tonight in recognition of what you have always done for people,” McCoy said. “You help in so many ways, doing things like getting people to go visit residents in nursing homes. Your hard work and dedication made a big difference in getting West Shawmut to become part of the city. We want to thank you for being a faithful member of our back row and coming to many council meetings.”

“I don’t know if I deserve this, but I want you all to know that I really appreciate this,” Lyons said.

Lyons was accompanied by a large number of family members and friends. They almost filled up the council chamber. Alfred’s wife, Betty Sue Lyons, introduced them all to the mayor and council members.

The plaques presented to Harris, Lett and Lyons had a quote from I Corinthians 13:13 “…this three remain: faith, hope and charity. But the greatest of these is charity.”

In action taken at the meeting, the council unanimously agreed to have a senior discount on utilities. Any household making $12,000 a year or less is eligible.