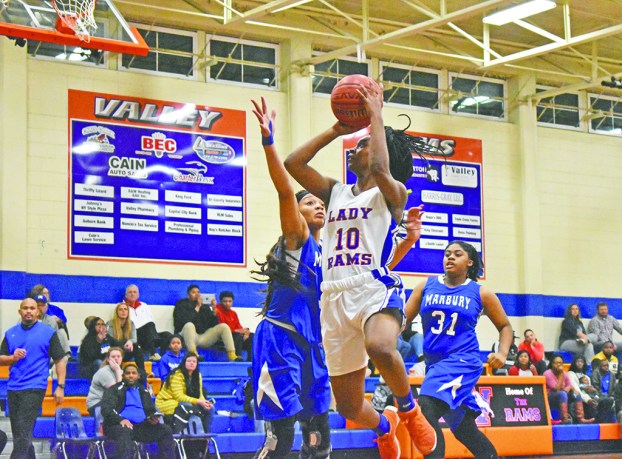 VALLEY — Its season was on life support midway through the third quarter. But the Valley High School girls basketball team fought to stay alive amid a double-digit deficit.

The resurgence allowed the Lady Rams to enter the final period of Monday’s Class 5A sub-regional playoff game against Marbury trailing by only six points. Then, they collapsed.

Marbury (21-5) turned a close contest into a rout over the final eight minutes of action, capturing a 66-46 victory. The defeat ended Valley’s season.

“What’s haunted us all year long is having a bad quarter,” Lady Rams head coach George Grimes said. “We had opportunities. We let the moment take over us instead of us taking over the moment.”

“We got too uptight trying to do more than some of us are capable of in certain situations, just made bad decisions,” Grimes said.

Marbury held a 12-11 lead after the opening frame and took a 27-21 advantage into halftime. Valley and Marbury went back and forth in the second quarter before the visitors closed on a 6-0 run.

Marbury parlayed its momentum into the second half. The Lady Rams fell behind by 10 points after coming out of the break sluggish, but they regained their footing with about four minutes remaining in the third quarter.

That’s when Florence scored eight of her team-high 21 points. She scored seven more in the fourth quarter, but her production alone wasn’t enough to carry the team. Kenjadae Dunn finished with 11 points. Magby had 10.

Marbury advances to Friday’s 5A Central Regional at Alabama State University in Montgomery.