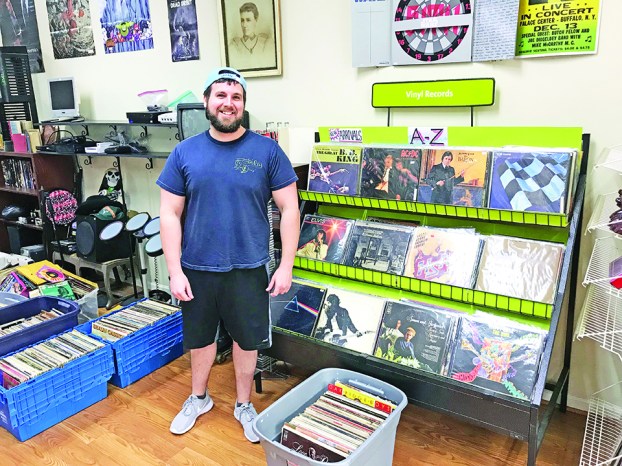 STEVEN THOMAS | Times-News A Unique venture: Tommy Rose, owner and operator of West Point Buy, Sell, Trade shows off some of the records for sell in his store.

WEST POINT — West Point Buy, Sell, Trade has a unique business model. Certainly not an original one but one that fits well in the Greater Valley Area.

Owned and operated by Tommy Rose, of Selma, the store is centered around, well, buying selling and trading new and used books, movies, games, toys, etc.

Opened a little over a year ago, business has been good.

“It pays all the bills. It pays for this [building]. It’s been pretty good,” Rose said, noting that most of his clientele are not residents of the area.

Instead, in an age where people living in small towns have to travel outside the borders or go online to shop for specialty items, people are actually traveling from as far away as Atlanta to shop at his store.

“I don’t get hardly any customers from Valley, some from West Point,” he said. “People come from all over the place but they don’t come from here.”Rose chalks this trend up to the fact the items in his store are rarities and what most would call “hidden gems.”

“It’s records and a few games,” he said, noting the most popular items. “They’re [customers] are surprised that there’s some place they can go for records at all.”

The idea for the store started when Rose, while working in the pawn business, decided he didn’t have any interest in selling guns and gold and laptops.

“This is the stuff I like,” he said with a laugh. “Records, toys, games, comics. I could probably make more money if I wanted to fool with laptops and TVs but I don’t have any interest in it.”

The decision to open in West Point can be boiled down to one reason.

“It’s cheap,” he said. “It’s cheaper to have a store here than compared to Auburn.”

Rose admits that his type of store would do better financially in a place like Auburn but the cost of upkeep would be higher and as previously noted, people are traveling to shop at his store.

“On the surface, it seems silly to open a story in an area like this,” he said. “But this area is growing and I want to be part of that.”

One major aspect of the business is selling items online.

This mostly due to the need for a quick turnaround on items.

“That’s really where being here in an economy that’s bad really hurts,” he said. “It doesn’t allow me keep cool, cool stuff in the store. I have to turn it over.”

On the flip side, Rose has discovered that there is a community for his merchandise, a small one but there is one.

The items brought in range from the mundane to the truly bizarre.

When asked to name one weird item brought in, Rose immediately pulled out a bag full of old watches.

I’ll buy anything,” he said with a smile. “Once people figure out, ‘Wow, I can get some money for these old video game?’ they bring them in.”

Rose noted that he usually pays customers about one-third of the original price of an item but that is still, usually, higher that most chain businesses with a similar model.

In an effort to increase traffic in his store, Rose is holding a “Buy One, Get One Free” sale starting next Wednesday, Feb. 14.

West Point Buy, Sell, Trade is located at 718 3rd Ave., West Point, Ga. He is open Wednesday, Thursday and Friday from noon to 8 p.m. and Saturday noon to 5 p.m.

VALLEY — An expansion to Valley Community Center is taking longer than expected, largely due to bad weather, but once... read more