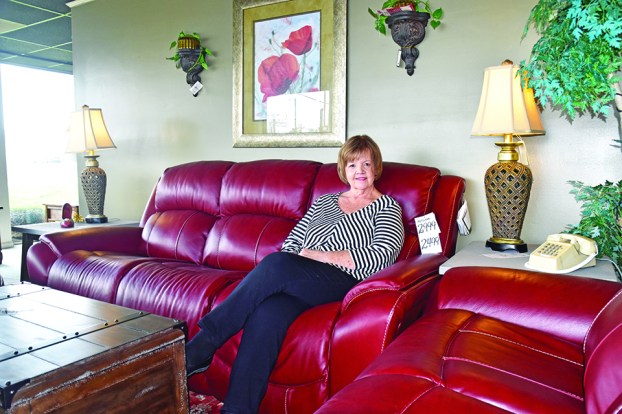 LANETT — Bedele Clark and her husband, Doug, have been the owners and operators of Clark Interiors for almost 31 years and the pair don’t plan on stopping anytime soon.

Their success, according to Bedele, can be chalked up to a having a very friendly and community oriented business plan.

“Business has been good,” she said. “We have developed a lot of friendships. We have customers that have been buying from us since the first day we opened.”

That focus on friendships has helped the store weather several tough times.

“We have been blessed to be here,” Clark said seriously. “We’ve had some challenging times, just like everybody else in this area but we give 110 percent every day.”

The business has also seen several changes with one of the biggest being the switch from being a showroom for Basset Furniture to La-Z-Boy.

The idea to open a furniture store is, according to Clark, a bit of a family legacy.

Her father owned a furniture store and she admits to growing up in the business. That history even extends into her marriage.

Clark met her future husband while he was working at her father’s store while attending college.

Clark noted that she and her husband have been very dedicated to the business.

That attention to customer service has paid off with the store not only providing a source of income, but an almost second home that her children and grandchildren have played in. Clark noted that her customers are most than just customers, they’re also her friends.

“We get a joy out of selling a good product and having a happy customer,” she said. “I can’t think of me doing anything else. This is what I like to do.”

As for the future, Clark said that was yet to be determined. At the moment they have no plans on making any changes.

“Just to be here until God tells us what else to do,” she said with a smile.

“When you shop local, eventually it helps you,” she said.

VALLEY — At a work session on Thursday evening, Mayor Leonard Riley talked about what’s been going on at Bethlehem... read more